While Legend of Zelda fans find themselves rallying for a Majora’s Mask remake on the Nintendo 3DS, Final Fantasy fans have spent the last several months enjoying the Final Fantasy X | X-2 remake on PlayStation 3.

At first glance there seems to be little mutual ground between the 2003 Japanese-role-playing-game Final Fantasy X-2 and the 2000 Legend of Zelda action-adventure title, Majora’s Mask, but the two are fundamentally two peas from the same pod.

Instead of following the tale of Hyrule from Ocarina of Time’s conclusion, players of Majora’s Mask experienced an estranged Link lost in the foreign land of Termina, far from Princess Zelda, the Triforce or any incarnation of Ganondorf. It was nothing like the Ocarina of Time fans knew and loved.

Instead of the Yuna Final Fantasy X players had come to love, in X-2 they experienced a wannabe pop-star and her gossipy femme fatale trio of the Gullwings. With the iconic sphere grid gone, it was nothing like the Final Fantasy X fans knew and loved.

Both of these direct sequels began with unexpected swerves. Majora’s Mask finds players in a parallel world while X-2 opens to what is seemingly the once somber Yuna now singing and dancing in a performance of ‘Real Emotion’ to a packed blitzball stadium.

The quirks did not stop there. Majora’s Mask has the infamous hand from the person living in the toilet. X-2 has an infiltration mission that involves mounting your foe and giving them the massage of a lifetime. 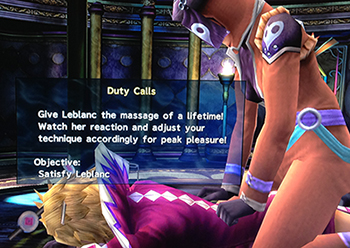 And why not? Majora’s Mask takes the characters and gameplay from Ocarina of Time and makes something that is eerily similar, yet simultaneously nothing alike. X-2 takes the same world—the exact same maps in fact—and just adds mission-based gameplay.

It’s a fair assessment to say that both titles were lazy design, but that is where their charm—or repulsion depending on how you feel—comes from. It was through copying their predecessors’ foundation that Majora’s Mask and X-2 became games focused on characters’ emotion and charting your own course.

Neither game is merely a linear journey to reach the credits, although they can be played that way to ultimately unsatisfying ends. Rather, their true value comes from completing all of the quests, for it is the collective of these seemingly disjointed missions that tell each game’s full story.

In Majora’s Mask we see Link set out on a “secret and personal journey” in search of his “beloved and invaluable friend” Navi. Yuna, on the other hand, sets off on a journey she admits is completely “selfish” in search of her beloved Tidus. She casts aside her responsibilities, like Link, to do what she wants for a change.

Both games are grounded by a message of appreciation for those no longer in the protagonists’ lives, while the lands around them experience great political upheaval that threatens to destroy the world.

Majora’s Mask’s tale is of four oppressed Guardian Giants whose land of Termina is threatened by the Skull Kid’s falling moon. X-2 is the tale of Spira’s political groups of New Yevon, the Youth League and the Machine Faction being routed by the doomsday device Vegnagun, at the hands Shuyin.

They both then lead to the same conclusion: that friendship and mutual collaboration is the way to a better world. The threat of destruction in both titles came from those isolated and alone. The Skull Kid was alienated from his friends while Shuyin was separated from his lover Lenne. 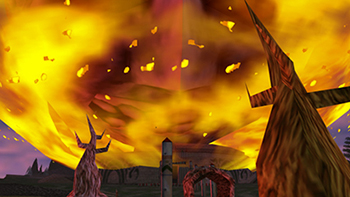 These stories do not simply unfold before you as you progress through pre-determined paths. Playing X-2 or Majora’s Mask in such a linear manner gives only mere glimpses of the parts that make up the meaningful whole. Those unwilling to dig deeper are left wondering what the point even was.

How you play and craft your quests was essential to Majora’s Mask and X-2. Collecting all of the Termina’s masks allowed players to watch the full credit sequence. The more quests you completed, the more of the story’s conclusion you understood.

Likewise, players’ mission completion rates in X-2 decides just what exactly Yuna finds in the end. It comes down to putting in the time to discover the richness and vastness, not of the recycled worlds or gameplay, but of the characters’ emotions, lives and struggles.

X-2 begins with the song ‘Real Emotion’, where the lyrics ask players “what can I do for you?” What can the game offer you? It’s all about crafting your own journey that can go many ways. In X-2 do you take one route or another? Do you bathe in the hot-springs yourself, or steal from your enemies while they bathe in the spring?

In Majora’s Mask, do you give Kafei’s letter to Anju? Do you wait with her as the clock counts down to destruction? Every choice you make leads to a different path as you customize your own experience within the three-day cycle.

Majora’s Mask and Final Fantasy X-2 are two games that should be eons apart—and perhaps are on a passing glance—but are truly kindred spirits. They are games which are overlooked because of their quirks, despite how pioneering their three-day cycle concept or real-time costume-based battle mechanics may be.

They are overlooked for being lazy. For being quick cash grabs riding on the coattails of their predecessors. While bizarre, they are genius in their way. They are hard to digest at times, but also far ahead of their times. Both games serve, in the end, as constant reminders that you should never judge a person by their appearance, a book by its cover, or, a game by initial impressions.