Why Are Final Dungeons So Often Short? 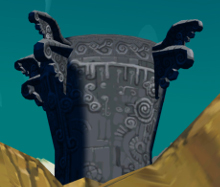 The final dungeons of the first three Zelda games were long, challenging, epic tests of the player’s skill and wit. So why is it that so often in modern Zelda, the final dungeons are abridged in some way? While maybe the trend started with Link’s Awakening, it’s pretty hard to call the Wind Fish’s Egg a dungeon, so let’s say it started with Ocarina of Time’s final dungeon: Ganon’s Castle.

Ganon’s Castle wasn’t a bad dungeon, but it was by no means full-sized, nor fully-formed; the dungeon was nothing more than a series of brief wings which you were meant to navigate in a linear fashion. Given that Ocarina of Time was a large game, I guess this was passable, especially since it was pretty well designed overall. But Majora’s Mask lacked a proper final dungeon of any kind, the Oracle games only had brief final areas as did The Wind Waker, Twilight Princess ended off on two different half-formed dungeons, and both the DS games gave you a final visit to their central dungeons instead of a full new one. Since the trend started in Ocarina of Time, the only games to have full-sized final dungeons are The Minish Cap and Skyward Sword.

I don’t understand why this has become such an all-consuming trend. Why do Zelda games so often end off on small, underwhelming areas?

I can appreciate having a brief area before the final boss if there’s a lot of dungeons throughout the game, and it’s certainly not a wrong way to do things, but I’ll never understand why it’s so rare for us to see a Zelda game these days that sends itself off with a bang by giving you one of its biggest and most challenging dungeons before the final boss. That’s just cool, and it’s been a blast in every game it’s happened in; I loved Ganon’s Tower in A Link to the Past, Dark Hyrule Castle in The Minish Cap, and the Sky Keep in Skyward Sword. I don’t necessarily hate the finales of any of the other Zelda games, but I also think it’s somewhat damaging for the series to rely so much on these tiny final areas.

I hope Skyward Sword’s Sky Keep starts a new trend of seeing big, epic final dungeons again. I wouldn’t mind another short one in the future, but I don’t think it’s something I like to see dominating the series like it does right now. But what do you think? Do you long for epic final journeys like those in the classic games? Or do you not mind a more relaxed romp before the final boss? Tell me in the comments!