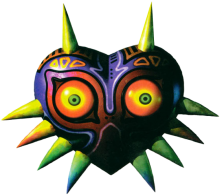 Before we begin, I’d just like to say that this editorial was originally going to come after ‘Who is Skull Kid?’, which would’ve been my next one, but after my rather narrow-minded take on the origins of the Happy Mask Salesman, I decided I’d do this one early, while the idea of exploring the multiple theories around the origins of Majora’s Mask is still fresh in my head. There are multiple, separate ideas on the origins of Majora’s Mask and who Majora is, some conflict with each other, and others fit together like puzzle pieces. With that said, let’s take a look at each of these different theories.

This is, of course, operating under the conjecture that Majora is female, which stems from the ‘eyes’ on the chest of Majora’s Wrath resembling female breasts, and the voice from the creature sounds feminine, not just because of its remarkably high pitch, but because, when she ‘sighs’ after being hurt, it sounds distinctly feminine. 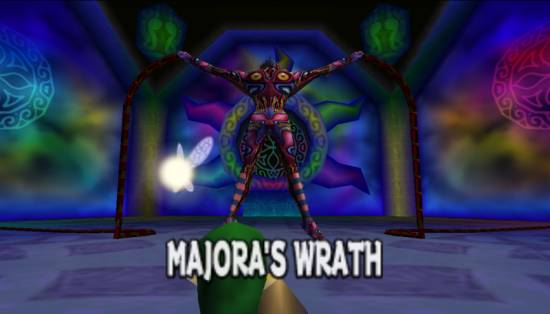 Some may say that Majora’s Wrath fighting with whips is also a sign that Majora is feminine, and it certainly can be taken that way, but it’s not definitive, as, in other forms of media, there are more male characters that use whips in combat than females: Marvel Comics villains Whiplash and Kraven the Hunter, Indiana Jones, the Predator in Aliens vs. Predator: Requiem, and that guy in Underworld: Awakening, as opposed to the Marvel Comics villain Madame Hydra/Viper, and the DC Comics characters Catwoman and Poison Ivy, just to name a few.

We can assume that Majora is, at the very least, a deity of some sort, from the fact Majora’s Mask was used by the ancient tribe in hexing rituals, most likely in the name of Majora. The idea that Majora is specifically a sun goddess stems from her connection to the rainbow, which is of course made up of the different colours of the electromagnetic spectrum that our eyes interpret from sunlight being separated by some sort of prism. That’s not entirely correct, but it’s the best way I can phrase it. Another idea that supports this is how the Fierce Deity, implied to be Majora’s nemesis-of-sorts, adorns the symbol of the moon, and as equal counterparts, where one (the Fierce Deity) represents the moon, the other (Majora) must represent the sun.

However, this idea does not go unchallenged, as other aspects of the game go against it: primarily, Majora seeking refuge in the moon. Because Majora possesses the moon, it could be interpreted as Majora finally besting the Fierce Deity; or, as the child wearing Majora’s Mask is sad and alone while the other children are happy and playing, it could be seen as Majora unwillingly accepting refuge by an enemy, but what it boils down to is that the final battle ground, a place that Majora made for herself, is within the moon, not another place related to the sun, possibly within the sun itself.

Another idea that goes against Majora being female, is that Majora (in the form of Majora’s Wrath) also has a masculine build, which some might take to indicate that Majora is, in fact, masculine, though this can be debated, mostly due to Sheik having a masculine build, but in fact being female. And finally, there’s the fact that Majora is hurt by light arrows. If Majora was, in fact, a sun goddess, you’d think that she would actually draw energy and sustenance from light arrows as opposed to getting hurt by them.

Last year, Zelda Dungeon contributor, the Wolfess, wrote on article called The Hyrulian Pantheon: The Minor Gods. In it, she discusses, in more detail, how Majora is a sun goddess. So if you want to know more, or if some of my points aren’t entirely clear, you can read her article after clicking on the link above.

Before continuing, be sure to know that just because this was depicted in a manga, doesn’t mean this is official. None of the manga adaptations of Zelda games are considered canonical, and the adaptation of Majora’s Mask is no exception. I haven’t actually read the manga, and though I’ve read about how Majora is depicted in the manga, I may still get a few points wrong, so please excuse me for any inconsistencies.

In the manga, rather than being portrayed as deity, Majora is seen as a shaggy dog/dragon, not unlike that thing in The Neverending Story, but with more armour. This beast feeds on the desires of those who would claim its magical armor and use it to grant their wishes.

The seemingly undefeatable foe was eventually defeated after a strange traveller brought forth a bongo, and after playing a catchy beat, Majora was put into a trance and couldn’t stop dancing. After three days of non-stop dancing, it didn’t feel like dancing anymore, and dropped dead from exhaustion. The strange traveller then, rather than simply taking its armor, carved a mask (Majora’s Mask) out of its armor in the hopes that it would contain the beast’s evil spirit.

Congratulations, strange traveller, you succeeded, and you nearly, indirectly, killed an entire land because of your success.

This idea certainly wasn’t derived from the game, with the evil spirit of the mask being the only real connection, but, hey, it’s a theory, and a very thought-provoking one at that, in that despite what is suggested in the game, Majora’s origin could be completely different, and we have no way of knowing. 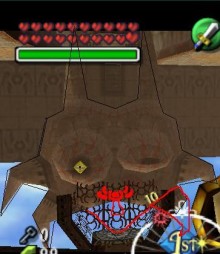 As the Wolfess discussed in her article, Majora’s Mask’s origins are strongly suggested to be tied in with the now-ruined Ikana Kingdom. Primarily, there is a big stone monument at the entrance to the Stone Tower Temple which resembles Majora’s Mask; a resemblance which would be greater if the monument was still complete. Depictions of Majora’s Mask can also be found on the pillars in the boss room, which is, as it happens, a large, unending desert which appears to be in the middle of a sand storm.

Two races used to inhabit the Ikana region: the apparently human (or humanoid) inhabitants of the Ikana Kingdom, and the Garo, shadow ninjas that opposed the Ikana Kingdom and, according to Tatl, have a thirst for blood. The Ancient Tribe are simply said to have used Majora’s Mask in their evil rituals, and the dark, bloody history of the Garo is somewhat different, but not so different that the two different tribes could not be one in the same. Given that the Ancient Tribe has ‘vanished’ by the time in which Majora’s Mask takes place, and the Garo are simple shells of the beings they once were, motivated only by willpower, and effectively being wiped out themselves, you can make the assumption that the Garo are the remnants of the Ancient Tribe.

This also links back to the idea of Majora being a deity of some sort, in that the Garo appeared to worship Majora’s Mask. A separate theory is how the depiction of the Triforce on pillars in Termina Field, leading to the Ikana region, is a representation of how the inhabitants of the Ikana region were against the Golden Goddesses of Hyrule, and that the Garo instead worshipped Majora.

CONNECTION TO THE TWILI

This idea sort of stems from the idea that the Ancient Tribe, like the Garo, were against the Golden Goddesses, and worshipped Majora. 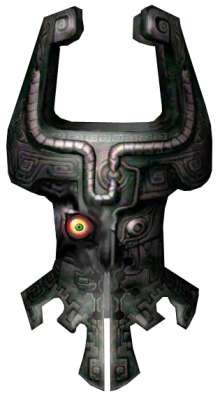 In Twilight Princess, it is said that the Fused Shadow was created by Dark Interlopers, who sought to take the Triforce with the power of the Fused Shadow, and rule the world with a combination of both powers, or something like that. The Dark Interlopers, who later become the Twili, after being banished to the Twilight Realm by the Golden Goddesses, are also a match for the Ancient Tribe.

The Fused Shadow bears resemblance to Majora’s Mask in two ways. In physical appearance (as can be seen to the upper left, with the eye of Majora’s Mask having been included in the picture for comparison), both objects share the same ‘eye’ design, and have a collection of dots towards the centre-bottom of the object, which could possibly be a visual depiction of their loyalty to Majora, in that they brand all their creations with Majora’s image. And in terms of power, they both held a dark, mysterious power.

As you can guess, this isn’t a theory about Majora’s origins, more of Majora’s future. After you defeat Majora’s final form, Majora’s Wrath, you can see it disintegrating, much like the way bosses in Ocarina of Time died, but I believe that Majora could’ve survived. I believe this because the moon doesn’t just get destroyed, or go back to its old orbit, it dissolves into a rainbow (remembering Majora’s connection with the rainbow), and then escapes over the horizon.

While this is most likely due simply to a lack of character animation, the Giants just stand there as it happens, as if, thinking to each other, they know that Majora wasn’t actually killed, but because there is nothing they can do about it now, they go back to sleep. All in all, this is simply a theory I came up with, and haven’t heard it anywhere else, but I felt like including it. 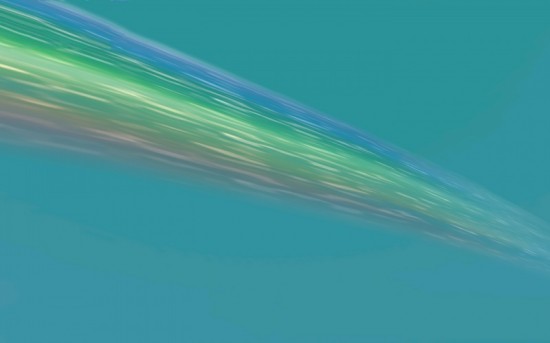 With all that said, I believe in a mix of the above theories, in that Majora was a sun goddess, and was indeed worshipped by the Ancient Tribe/Garo/Dark Interlopers, who created the mask in Majora’s name (literally). And when the Dark Interlopers who rose up against the Golden Goddesses were sent to the Twilight Realm, those who had remained in Termina and continued their battle against the Ikana Kingdom became the ghosts of the Garo that now haunt the Ikana region. And in addition to all that, I like to think that Majora that survived, despite being shown dying.

But given the mystery surrounding this character, this ALL depends on what YOU guys think. Do you prefer to think that Majora was a simple beast, as opposed to being a sun goddess? What do you think of Majora’s Mask’s connections to the Ikana region? Do you think that the Ancient Tribe, Garo, and Dark Interlopers are all connected somehow, like I do, or that they are all separate? Or do you have a completely different idea sourced only from your imagination? Let me know in the comments.