“When I Grow Up, I’ll Marry You!” — An Exploration of Trees in The Legend of Zelda

Posted on February 23 2021 by Alison Brunyee 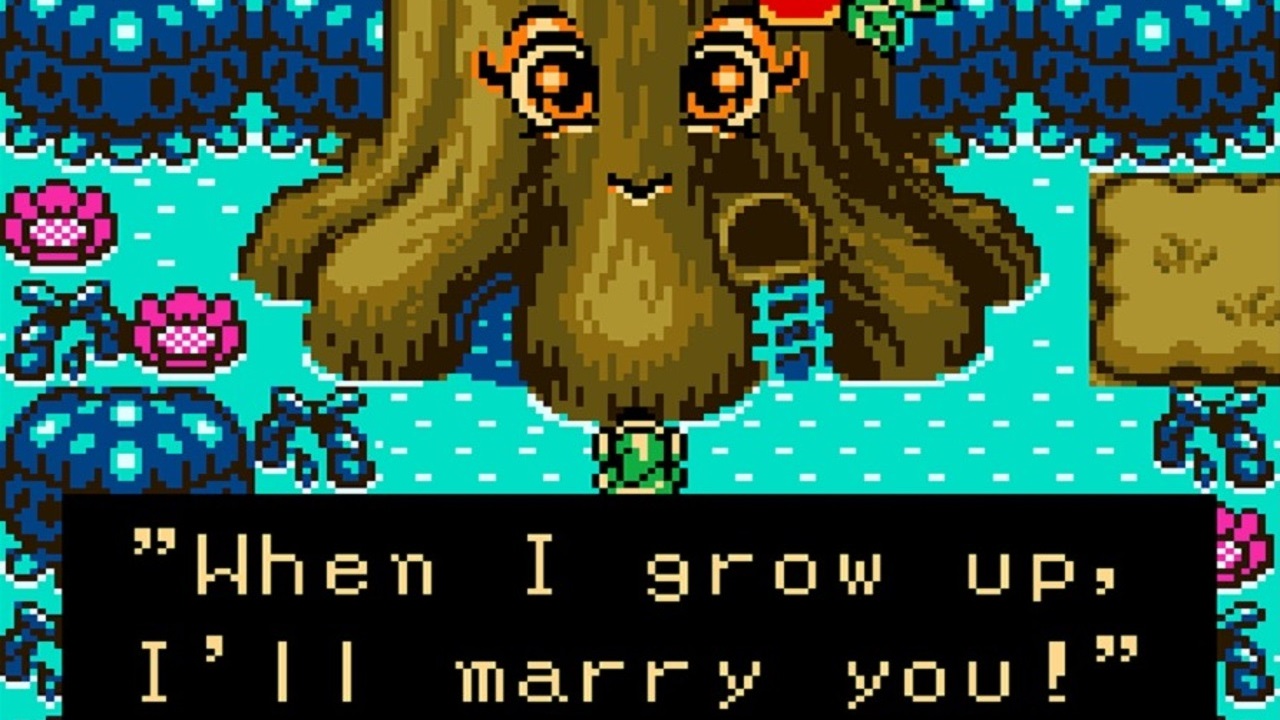 In celebrating the 20th anniversary of Oracle of Ages and Oracle of Seasons, I will take you on a tour of trees. Yes, you read that right, trees. Taking a stroll in the woods is awesome, so it’s no surprise that trees have become rooted in the Zelda series.

We’ll dig into how trees are used in game and how they have grown in importance. I’ll plant some thoughts about their use in Oracle of Ages and Seasons, and I’ll branch out to consider some sappy tree lore as well. So, sit back and relax as we delve into the world of trees; and I promise that will be the last of the tree puns… maybe.

Trees in the Zelda series

Having been to Japan twice, I’ve noticed how the Japanese (like many) have a great love and respect for trees. As life can get very hectic living in the city, one of the few opportunities for some downtime is exploring the great outdoors. There is the Cherry Blossom forecast in the spring, and of course a whole art dedicated to cultivating Bonsai trees. It makes sense that some of this appreciation for nature would work its way into Zelda games.

In most cases, trees have minor parts to play. They can be obstacles removed by burning or cutting them down. Others yield interesting prizes when bumped into, such as Rupees, Fairies, Kinstones, and Heart Pieces; if you’re unlucky, however, you might find yourself being chased by bees instead! And in The Minish Cap, tree stumps can even be used as portals to transform to the size of a Minish with a little help from Ezlo.

Trees have also made their way into different aspects of level design. For example, in the original Legend of Zelda, the entrance to the first dungeon is a tree. Many games have expanded on this concept in some form, with Link also entering tree-like structures in Majora’s Mask and Twilight Princess. In Skyward Sword, our hero has to navigate inside and outside a gigantic tree to reach Yerbal. And taking this idea one step further, Ocarina of Time and Hyrule Warriors decided to take the action inside the Great Deku Tree itself. I never get tired of seeing a wood or forest-themed level. It’s a chance to see how graphics have improved over the years, and what sort of atmosphere is created. Whether it be eerie or peaceful, each woodland setting has a distinct character of its own.

Puzzles in the Zelda universe come in all shapes and sizes. Manipulating nature through the use of time or seasonal changes is a key aspect in the Oracle games. For example, in Ages, trees grow and die which can give access to new areas somewhere on Labrynna’s map. By comparison, Seasons has trees that lose their leaves in winter and shrivel up to allow players to pass by.

We’ve continued to see tree-based gameplay ideas develop in more recent games as well. In Spirit Tracks, tree branches can point the way through the Lost Woods; but ignore that fourth tree – it has no sense of direction! And Breath of the Wild has three Korok trials which also take place in the Lost Woods. The first uses trees as well as the Magnesis Rune; spotting chunks of iron hidden inside the trees will again show Link where he needs to go. Although not a taxing puzzle, I thought this alternative take on following trees was quite clever.

Other trees in the Zelda games, however, can be characters in their own right. We’ve seen the Deku Tree in Ocarina of Time, The Wind Waker, and Breath of the Wild acting as guides for Link. Full of wisdom and a nurturing spirit, they often live alongside a race of forest dwellers such as the Kokiri or the Koroks. As a guardian, the Deku Tree takes his role very seriously and often comes under attack from evil forces. Still, this does not stop him from helping Link fulfil his destiny.

Trees in the Oracle games

In Oracle of Ages and Seasons, the Maku Tree is very much a central character that one returns to time and time again in order to proceed. I’m glad that Nintendo went to the effort of creating two distinct personalities for each of the games. In Seasons, we have a male Maku Tree who has slept through the dramatic events of Din’s capture and asks for Link’s help to restore the eight Essences of Nature. This version of the Maku Tree is a serious fella but has a habit of falling asleep. Popping his nose bubble with your sword is the only way to wake him up, and he doesn’t always appreciate it!

Ages has a female Maku Tree wearing a cute red hibiscus flower. I’ll be honest and say I prefer this Maku Tree to the other. There is more of a history between Link and this Maku Tree. Link saves her in the past from Veran’s minions and prevents her from being erased from time. Due to being rescued by Link, she forms a rather intense attachment. Apparently, she has been waiting to marry him for 400 years. This situation reminded me of Princess Ruto and the Zora Sapphire in Ocarina of Time.

An interesting thing in the Oracle games is that there are different types of seeds that one can collect from trees. These aren’t just your bog-standard seeds though; these seeds can aid Link on his quest in surprising ways. The main types of seeds are Ember, Scent, Mystery, Pegasus, Gale, and Gasha seeds. Each seed has its own unique properties, and it’s fun to play about and see what they can actually do. The Gale Seeds, for example, can be shot at an enemy to warp them away. Handy dandy, if I say so myself!

The Tree of Life is a familiar symbol that you’ve probably seen at least once. I’ve worn a necklace with the tree for years, and even Instructor Owlan in Skyward Sword has the image of a tree on his sash! Interpretations of the tree are wide and varied, but I’d like to share some of them with you, with a Zelda spin of course.

One aspect of the tree is how everything in the universe is connected and that we’re never truly alone. In Oracle of Ages and Oracle of Seasons, Link is continuously in contact with the Maku Tree via telepathy as he seeks the eight Essences to restore their memory. This isn’t exactly the same as being connected to the universe, but he does see how the actions of Veran or General Onox affect everything and everyone around him. People disappear and the seasons are in chaos. It spurs him on, knowing that if he doesn’t do something, these changes will become permanent.

Like a tree that grows taller and stronger over time, a person can seek to improve themselves both physically and mentally. Link doesn’t begin his journey as a powerhouse with all equipment, hearts, and magic spells at his disposal. Quite often he is underestimated by friend and foe alike. It is only through passing trials, gaining wisdom, and learning necessary skills that eventually he becomes strong enough to take down the enemy. Link shows great strength by overcoming adversity just as a tree can weather the storm.

Trees can ensure that their essence will live on through new saplings that grow. At the moment, the future is uncertain and making plans is difficult. In Ocarina of Time, despite Link’s best efforts the Deku Tree (his adoptive father) sadly dies. The Kokiri’s future is in doubt and the forest is left without a guardian. But the Deku Tree does live on through his son the Deku Tree Sprout. This cheerful lad will grow to become the forest’s new guardian and keep the Kokiri safe. I’m sure Link took great comfort from this.

A final interpretation is that we are sometimes like tree saplings. We want to grow deep roots and have a firm foundation. But this takes time and we are vulnerable when trying to secure ourselves. In Ages, this is taken literally as the Maku Tree is attacked by monsters and has to be saved by Link. This is likely a problem that the Hylian could do without. What makes matters worse, is that even when the Maku Tree is saved, it’s in a weakened state. One guardian has memory loss and the other has lost its might; are they next to useless?

Well, as you progress, the Maku Tree grows and players are able to climb higher and higher to collect more useful items. He /she gathers strength and, towards the end of the game, the Maku Tree’s assistance is vital in order to reach the final boss. Link would never be able to reach Veran’s Tower or General Onox’s Castle on his own. In the end, all that struggle and frustration is worth it. The respective lands of Holodrum and Labrynna are saved from the forces of darkness.

Oracle of Ages and Oracle of Seasons may just be games, but perhaps we could learn from them. The world is dealing with a lot of uncertainty; however, that doesn’t mean we give up hope. We do what we can and grow through these experiences just like Link and the Maku Tree.

So, there you have it. I hope you’ve enjoyed my wander into the woods to explore trees in Zelda. Were there any tree moments I missed? Are you intrigued to give Oracle of Seasons or Oracle of Ages a go? Do you have any good tree jokes? Share your thoughts in the comments below!

Alison Brunyee is an Original Content Editor for Zelda Dungeon. She likes reading manga and collecting Japanese wind chimes. Her favorite Zelda game is Ocarina of Time, but she is slowly warming to Skyward Sword.