What’s This? A Semi-Decent Zelda Feature From IGN?

Posted on May 14 2011 by Nathanial Rumphol-Janc 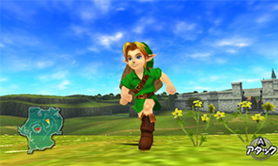 IGN, IGN, IGN. So long as you keep writing Zelda features, we’ll be keeping to analyze them and telling you exactly what we think of them. Given the past between us, it’s a bit of a shock for me to be saying that this is the first decent Zelda feature from IGN in a while. It is still riddled with the “lack-of-care” style mistakes that we’ve come to expect from IGN, but its in the actual contention of article that we find a very valid point.

I got a bit of a giggle over some of their phrases, like “as a diehard Zelda fan” and “us who could solve these puzzles with our eyes closed”. That’s IGN for sure! In all seriousness, this author does actually know what they’re on about a lot more, which makes this feature a valid and thought provoking read from IGN… for once.

The feature is called “The Legend of Zelda: The Perils of Altering a Classic”, and as the titles suggests, it takes a look at the trade off that Nintendo has faced in remaking Ocarina of Time. The trade-off between making it accessible to newer gamers, and not disappointing the fans of the original. The feature talks about how Nintendo have achieved the perfect equilibrium through such clever additions as “visions” and lines in the Water Temple that guide new players and don’t hinder classic players.

They go on to speak about how the extra-features like the Boss Challenge Mode and new Master Quest give us experienced players more than just a portable version of the classic. A very strong point made by the author is how the new graphics really don’t seem out of place because, in a way, they look like what we all imagined as we sat there viewing the polygons of the 64 version. I never thought I’d be saying this, but I agree with IGN entirely… in this instance. This read is actually worth checking out. In the words of IGN, let us know what you think by “sounding of in the comments section below”, because that makes sense.