What Makes a Good Supporting Character? 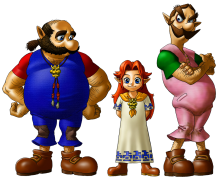 Throughout the Zelda titles, there are a select few supporting characters that stand out to me as particularly strong. I’m not talking about major characters like Zelda, Midna, or Marin, who I would consider main characters, but the denizens who populate the surrounding areas of Zelda games.

Malon and Talon are certainly standouts. They’re integrated well into gameplay, as they’re introduced in the main quest, but several subsequent in-game quests allow their characters to develop further. Win Epona from Ingo and Lon Lon Ranch starts to shape up–wake up Talon in Kakariko village and he returns to the ranch, eager to turn over a new leaf (though his commitment is questionable).

What strikes me about these characters is both their seamless integration with larger events in Hyrule–Ganon’s evil directly affects them–and the simultaneous development of their own individual but intertwined plotlines. Malon, Talon, and Ingo probably have very few lines, but few would forget their personal stories.

Part of the reason Majora’s Mask’s whole supporting cast is so widely lauded is likely due to the immediacy and universality of the evil at work in the game. The moon leaves no part of Termina untouched, and all of the most memorable characters respond directly to it. Anju and Kafei have their own fully-developed story and contend with their own villain. They do little to help Link on his own quest. Yet we sympathize with them, and ultimately understand that their story is a reflection on the larger story at work. 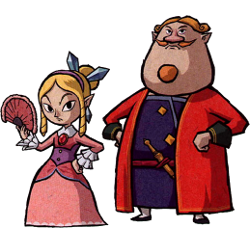 The evil at work in The Wind Waker has substantially less immediacy, but a select few characters, such as the rich girl turned poor and her father, also follow this formula–and once again, they’re among the strongest and most memorable the game has to offer.

Zelda characters draw their strength from the simple but compelling stories that define each of the games. If the stories are good, then the possibility for better characters presents itself. But they’re also made strong by compelling individual stories. They are not usually superheroes. They don’t always even share Link’s courage. But with a little development and integration, they help Hyrule feel just a little more alive.

What are your favorite supporting characters, and what do you think makes them strong?