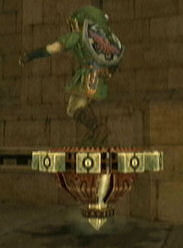 One of our resident forum members Zeypherlink, former webmaster over at Zelda Adventures, sent me an interesting article discussing some of the most useless items in the Legend of Zelda series. It’s been a common topic of discussion over the years and this article tosses a few items that are not often considered to be useless. The items said to be useless are listed below.

Grappling Hook from The Wind Waker.
Step Ladder from The Legend of Zelda.
Slingshot and Hawkeye from Twilight Princess.
Biggoron’s Sword from Oracle of Seasons and Oracle of Ages.
Giant’s Knife from Ocarina of Time.

A fair listing and I definitely agree with most the items above. The Biggoron’s Sword from the Oracle series was a great add-on to use after the game that gave it some replay value in my opinion. Problem is that there wasn’t much to do by the time you got it. The Grappling Hook from the Wind Waker did become somewhat obsolete, but still thought Link used it quite a bit in the first couple dungeons and parts in the overworld to warrant it to be considered somewhat useful. Some of the other notable items that the article mentioned as useless were the following.

The Sand Wand and Dominion Rod share similar attributes in being that they could only be used when there are specific conditions within the game. Difference being the Sand Wand was the final item in Spirit Tracks and was used extensively in the dungeon it was found, plus the final segment of the Tower of Spirits, so I think it served its purpose. The Dominion Rod just sat in your inventory after the Temple of Time and reaching the City in the Sky.

The items in Adventure of Link didn’t really seem like items since you didn’t exactly use them in the same sense as you did in other Zelda titles. I didn’t feel like the cross or hammer gave Link an item, but more so it gave him an ability. Granted for the type of game that Adventure of Link was, this worked fine so I don’t necessarily think this was that bad of a thing. If anything, I think I’d consider stuff like the Thunder spell to be quite useless as that used for one primary purpose and that’s it.

I think the Spinner is a notable item missing from this list. If the Dominion Rod is on the list, then the Spinner should definitely be mentioned as well as it was barely used outside of a couple rooms in Arbiter’s Grounds. The Mirror Shield from The Minish Cap was kind of cool, but given you couldn’t get it until after you beat the game made it quite useless. The Light infused Master Sword from the Palace of Twilight in Twilight Princess was incredibly useless in my opinion as it was sorta tacked on. I would have much preferred a brand new enemy rather than a lame upgrade.

So what do you think of the list? Is there any notable items missing? Did you think any of the items listed were actually useful? I sure hope Zelda Wii remedies this problem of including useless items. They sure tried to make sure in Spirit Tracks that items acquired early on were used throughout the quest. Only time will tell…