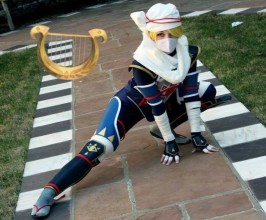 Every serious cosplayer knows that the costume is only half the battle. Often times it’s the quality of the props that make or break a good cosplay, and in the case of Sisa Cosplay’s Alyssa DiPaolo, her prop may just make her Sheik cosplay one of the best ones out there. Aside from an already beautiful Hyrule Warriors style Sheik costume, Dipaolo has constructed an electronic replica of Sheik’s lyre. With the use of triggers, the strings can play the different notes of an ocarina; true to Ocarina of Time once you play the first three notes of a song, the harp will automatically play out the rest for you!
See DiPaolo demonstrate her one-of-a-kind prop after the jump.

Dipaolo hand carved the harp from wood and hand painted it as well. The harp plays eleven songs total from Ocarina of Time and utilizes the sounds from the game’s pause menu screens. I’d be mighty shocked if this magnificent piece of machinery didn’t win DiPaolo the Oh Comic Con! Cosplay Contest, best of luck to her.

What do you think of DiPaolo’s harp and costume? Would you be interested in buying or making an electronic Sheik harp of your own? Are there any other Zelda characters you’d want to see DiPaolo cosplay next? Any items or instruments you’d want her to make? Let us know in the comments!