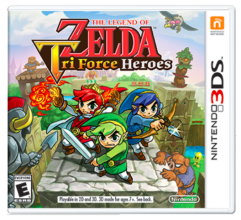 The launch of Tri Force Heroes is now less than a month away, and so much news has been circulating about this title. It seems that as release day draws nearer, everyone is starting to get more and more excited about a title that when originally announced at E3 this past June, was met with a slight bit of uncertainty. GameTrailers has recently shown off their most anticipated games for fall 2015, and Tri Force Heroes has made the list! The upcoming title from the Zelda franchise lands at number 10 in their Top 10 list along with other highly anticipated games such as, Xenoblade Chronicles X, Rise of the Tomb Raider, and Star Wars Battlefront.

Head on past the break to check out the full list of GameTrailers Top 10.

What games make your top 10 list? Will you be playing Tri Force Heroes come October 23rd? Tell us your thoughts in the comments below.