Bottom screen for A Link to the Past 2 revealed

A Link to the Past 2 has been given over to the press for first-hand impressions towards what will be Link’s newest handheld adventure in four long years (not counting Ocarina of Time 3D) and already the game is looking visually great. While testing the demo, some journalists have recorded themselves and the game’s look on the 3DS XL system which has also revealed what we can expect to be displayed on the touch screen.

Here’s a closer look at the the screenshot showcasing the touch screen while playing A Link to the Past 2: 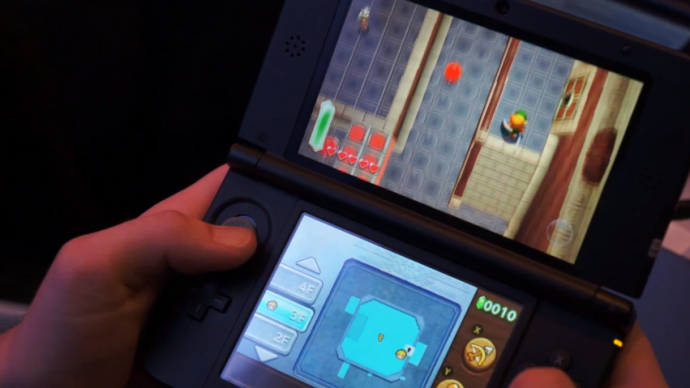 From this first glance we can see that rupees, the dungeon map (probably Overworld map too), and the X and Y assigned items are placed in a neat and tidy position on the touch screen. This is a little different to Ocarina of Time 3D’s touch screen display which, as well as the features mentioned above, also included Link’s hearts, magic meter, and a couple of extra assigned touch screen buttons for items. The video below also shows a certain “collect” button which should be detailed closer to A Link to the Past 2’s launch. Take a look at the video below!

That footage just makes me want A Link to the Past 2 even more! Hopefully we’ll find out more about the touch screen later on although it’s good to know that Link is controlled via the circle pad rather than stylus. Those two extra touch screen buttons used for Ocarina of Time 3D could also be a handy inclusion as I found them a great benefit for certain items such as the iron boots or bombs.