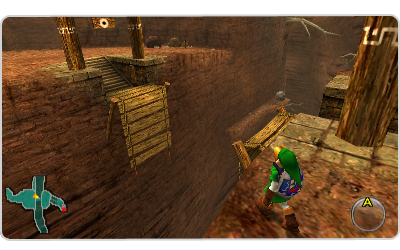 Howdy, and welcome to the next segment of my weekly Timeshift Thursday feature! Most long-time Zelda fans usually have childhood memories either remembering the original NES self-titled adventure or Ocarina of Time as their first played game in the critically-acclaimed series. I fall under the latter category as my Ice Blue N64 regularly loaded up that special limited edition gold cartridge delivering the entertainment and fun I had drifting away form the real world into the land of Hyrule. Sometimes, I wish I could head back in time and do it all again; that would be such a privilege! Thankfully, with the powerful Nintendo 3DS handheld, I can now take the magnificent Ocarina of Time anywhere I want to and enjoy the beautiful stereoscopic 3D I love so much.

Today, I’d like to take you to the beautiful Gerudo Valley and its mysterious fortress which features prominently near the end of Ocarina of Time and houses one of the greatest Zelda compositions ever created in the series. There’s plenty to discover about this stunning area included in the land of Hyrule so hit the jump below if you’d like to learn more!

Right from the moment Link enters Hyrule Field he has the ability to traverse into the region of the Gerudo tribe. However, as a young child, he happens to be blocked off by Gerudo guards providing inaccessibility to the clouded area. Gerudo Valley features a beautiful landscape including a large, majestic waterfall and river which, if jumped in, provides a hasty trip all the way to Lake Hylia. A bridge is originally provided to cross the valley when Young Link but 7 years later that same bridge has been mysteriously obliterated and only Epona or a Longshot can allow Adult Link to reach the other side towards the Gerudo Fortress. One of the best cut-scenes in Ocarina of Time is essentially when you ride Epona toward the valley’s long drop and the viewpoint changes showing Link and his trusty steed leap over the gap as the waterfall rushes underneath. It’s a stunning glance at Link and Epona’s superb effort to do courageous acts in their quest to relinquish Ganondorf’s power over the suppressed land. I also should mention that Nintendo designed Gerudo Valley very generously in allowing Zora’s River to flow through to Lake Hylia. It would have been awesome, however, if you had been given the opportunity to swim down Zora’s River from Zora’s Domain all the way through Gerudo Valley and reaching Lake Hylia at the end. I think that would have been a brilliant adventure option to experience. 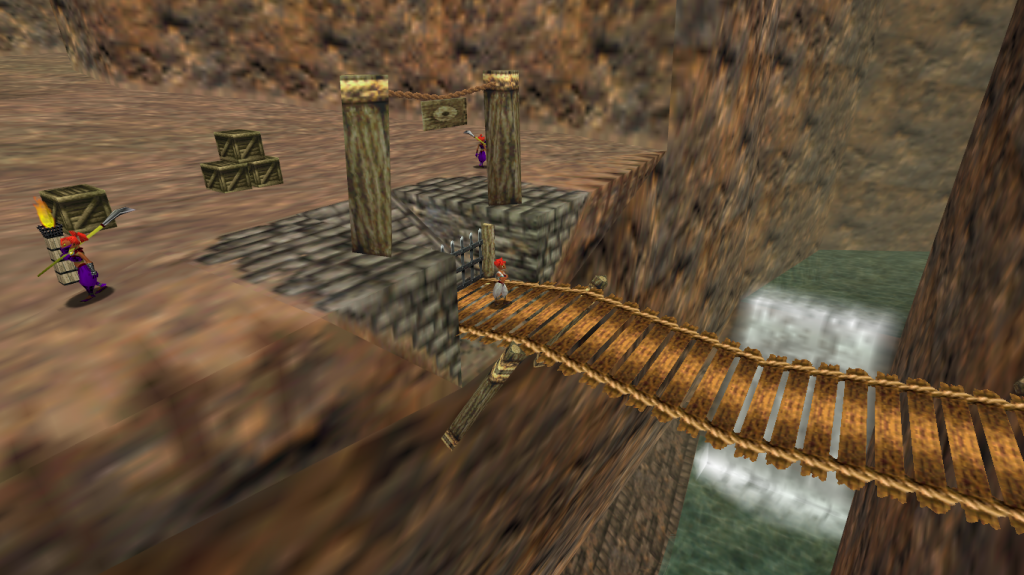 Probably the best part about exploring Gerudo Valley is after Link is asked to rescue the carpenters from the death-warranted Gerudo Fortress. Link has to sneak around the fortress avoiding Gerudo guards while trying to rescue these captured carpenters and can only open their cells by defeating skilled Gerudo fighters who appear when Link finds each carpenter’s prison location. Even to this day, I still manage to be caught so many times! I find it hilarious how the Gerudo guards just chuck Link into a prison cell without taking away any of his weapons; you’d think they’d learn the exact method Link is using to escape each time. After rescuing each carpenter you, surprisingly, become a friend of the Gerudo tribe who do not seek to hurt you anymore, and want your quest to succeed in destroying Ganondorf’s evil schemes.

I cannot end this Timeshift Thursday feature without forgetting to mention Gerudo Valley’s thrilling music composition! This is essentially the main reason why I love the area so much and spend so much time exploring its every nook and cranny. I seriously can’t get enough of that acoustic guitar; it’s just so soothing and relaxing to have on when drifting off to sleep or studying. The horns also provide that uplifting theme usually witnessed in the Hispanic culture and suit well for the area Link is traversing. This composition is absolutely one of my favorite themes in Ocarina of Time; I could just keep listening to it over and over it’s that good.

What do you think of Gerudo Valley and Gerudo Fortress? Is it one of your favorite areas to explore in Ocarina of Time? Are you a fan of the music theme used for Gerudo Valley? Please let me know what you think in the comments below!