Things Zelda U Could Learn from The Adventure of Link 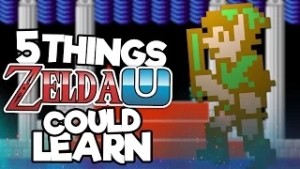 In a recent video by Zeltic, he pointed out five things that he believed Zelda U could learn from The Adventure of Link on the NES. It stated that the game should not have experience like in The Adventure of Link, as it would detract from its non linear gameplay. Other points were bringing back the raft and adding Dark Link. The remaining points were bringing back the jump and varied spells.

The five points that he made were great, and I agreed with them all. I especially liked the idea of magic and jumping coming back. Bringing back the raft that could possibly lead to a boat would be awesome. If they did this then they could make it that the raft can only go into shallow parts of the water with deeper parts requiring you to use the boat. He also did a video on what Zelda U could learn from The Legend of Zelda. After doing one on both the first and second games I hope he follows through and makes a five things Zelda U could learn from A Link to the Past video.

What did you think of the points mentioned? Drop a comment below sharing your thoughts.

Comments
Sorted Under: The Adventure of Link, The Legend of Zelda
Tagged With: dark link, NES, Zelda Wii U, Zeltic