The Spider’s Thread: Symbolism of the Ancient Cistern

Posted on March 17 2012 by GestaltReplicant

The following is a theory-based article and involves speculation on the part of the author, and is not representative of the view of Zelda Informer as a whole. Spoilers will be present. Credit goes to the Brazilian website Nintendo Blast for finding this parable. The parable can be found in its entirety here, for those who would like to read it without theoretical/analytical interruption before reading this article.

The Ancient Cistern of Skyward Sword is a truly mysterious dungeon. While it keeps in line with the usual mechanical style we’ve come to associate with water-based dungeons in the series, it takes a completely different aesthetic take. It’s hard not to be drawn in by the mystical and peaceful golden glow of the upper levels harshly contrasted with the dark hellish crypts below them. Not only is it arguably the best dungeon in the game, there is quite a hefty amount of Eastern symbolism apparent throughout the dungeon. In fact, the entire temple is quite possibly centered around a Japanese parable known as “The Spider’s Thread”. This article will look at the entire parable and compare it with what we have seen in the dungeon.

One day, the Buddha was strolling alone along the edge of a lotus pond in Paradise. The blooming lotus flowers in the pond were each pure white like jewels, and the place was filled with the indescribably wondrous fragrance continually emitted from each flower’s golden center. It was just morning in Paradise.

Already this sounds like an apt physical description of the Ancient Cistern, specifically the white lotus flowers in the pond. In addition, the central statue dominating the dungeon is identical in appearance to a Buddha figure, and the idea that it was morning corresponds with the golden glow of the upper levels.

After a time, the Buddha paused at the edge of the pond and from between the lotus leaves that covered it saw a glimpse of the state of things below. Now this celestial pond just happened to lie directly over Hell, and peering through that crystal-clear water was like looking through a magnifying glass at the River of Death and the Mountain of Needles and such.

Similarly, the upper levels of the Ancient Cistern lie directly above the already-mentioned nightmare-scape of the lower levels. This “underground” (or underwater, as it is) of the Cistern is adorned with dark red-purple waterways and numerous traps and puzzles involving spikes and needles, fitting the description of Hell in the parable.

The Buddha saw there, in the depths of Hell, a single man writhing along with the other sinners. This man was named Kandata, and he had been a notorious thief who had performed murder and arson and other acts of evil. In his past, however, he had performed just one good deed: one day, when walking through the deep forest, he saw a spider crawling along the road. At first he raised his foot to crush it, but suddenly he changed his mind and stopped, saying, “No, small though it may be, a spider, too, has life. It would be a pity to meaninglessly end it,” and so did not kill it.

Looking down upon the captives in Hell the Buddha recalled this kind act that Kandata had performed, and thought to use his good deed as a way to save him from his fate. Looking aside, there on a jade-colored lotus leaf he saw a single spider, spinning out a web of silver thread. The Buddha carefully took the spider’s thread into his hand, and lowered it straight down between the jewel-like white lotuses into the depths of Hell.

And here we have one of the key components of the parable – and the Ancient Cistern – laid out. In order to escape the lower levels of the dungeon, Link has to climb up a single rope from the darkness and back into the golden light. This can be drawn as a clear contrast with the lifeline that the Buddha has thrown to the thief Kandata.

Kandata was floating and sinking along with the other sinners in the Lake of Blood at the bottom of Hell. It was pitch black no matter which way he looked, and the occasional glimpse of light that he would see in the darkness would turn out to be just the glint of the terrible Mountain of Needles. How lonely he must have felt! All about him was the silence of the grave, the only occasional sound being a faint sigh from one of the damned. Those who were so evil as to be sent to this place were tired by its various torments, and left without even the strength to cry out. Even the great thief Kandata could only squirm like a dying frog as he choked in the Lake of Blood.

Well, this certainly gives an…interesting new insight into what all of that reddish liquid is in the lower levels of the dungeon. We’re given a picture of a central lake of blood, endless torment, and an area filled with the dead and damned. This is certainly an apt description of the land made entirely of bones and filled with those spike-based puzzles and zombie Bokoblins. 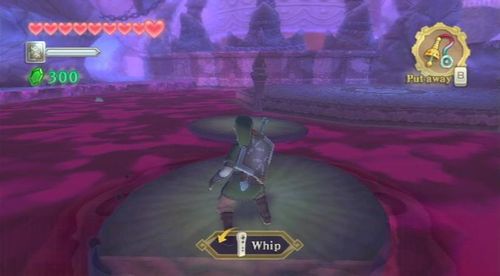 But one day, raising up his head and glancing at the sky above the lake, in the empty darkness Kandata saw a silver spider’s thread being lowered from the ceiling so far, far away. The thread seemed almost afraid to be seen, emitting a frail, constant light as it came down to just above Kandata’s head. Seeing this, Kandata couldn’t help but clap his hands in joy. If he were to cling to this thread and climb up it, he may be able to climb out of Hell! Perhaps he could even climb all the way to Paradise! Then he would never be chased up the Mountain of Needles, nor drowned in the Lake of Blood again.

Thinking so, he firmly grasped the spider’s thread with both hands and began to climb the thread, higher and higher. Having once been a great thief, he was used to tasks such as this. But the distance between Hell and Paradise is tens of thousands of miles, and so it would seem that no amount of effort would make this an easy journey. After climbing for some time Kandata tired, and couldn’t climb a bit higher. Having no other recourse, he hung there from the thread, resting, and while doing so looked down below.

The bit about how he was forced to be chased around the mountain of needles and drown in the lake of blood seems to fit in nicely with all the agility-based puzzles in the lower levels, especially the one where Link has to run on the endlessly turning wheel to outrun the spike wall. But we’re just about to hit the final, big piece of this parable.

He saw that he had made a good deal of progress. The Lake of Blood that he had been trapped in was now hidden in the dark below, and he had even climbed higher than the dimly glowing Mountain of Needles. If he could keep up this pace, perhaps he could escape from Hell after all. Kandata grasped the thread with both hands, and laughingly spoke in a voice that he hadn’t used in the many years since he had come here, “I’ve done it! I’ve done it!”

Looking down, however, what did he see but an endless queue of sinners, intently following him up the thread like a line of ants! Seeing this, surprise and fear kept Kandata hanging there for a time with mouth open and eyes blinking like a fool. How could this slender spider’s web, which should break even under just his weight, support the weight of all these other people? If the thread were to snap, all of his effort would be wasted and he would fall back into Hell with the others! That just would not do. But even as he thought these thoughts, hundreds more, thousands more of the damned came crawling up from the Lake of Blood, forming a line and scurrying up the thread. If he didn’t do something fast, surely the thread would snap in the middle and he would fall back down.

Kandata shouted out, “Hey! You sinners! This thread is mine! Who said you could climb up it? Get off! Get off!”

Though the thread had been fine until just then, with these words it snapped with a twang right where Kandata held it. Poor Kandata fell headfirst through the air, spinning like a top, right down through the darkness. The severed end of the silver thread hung there, suspended from heaven, shining with its pale light in that moonless, starless sky. 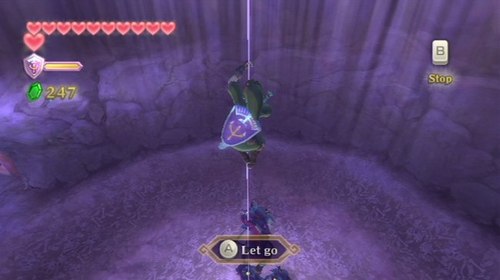 And there is the direct correlation with the section where Link has to out-climb the Zombie Bokoblins up the rope in order to escape (certainly one of the most harrowing moments of the game). It is this point in the story where it cements a sure connection to the design of the Ancient Cistern. And here is the ending, for the purpose of closure:

The Buddha stood in Paradise at the edge of the lotus pond, silently watching these events. After Kandata sank like a stone to the bottom of the Lake of Blood, he continued his stroll with a sad face. He must have been surprised that even after such severe punishment Kandata’s lack of compassion would lead him right back into Hell.

Yet the lotus blossoms in the lotus ponds of Paradise care nothing about such matters. Their jewel-like white flowers waved about the feet of the Buddha, and each flower’s golden center continuously filled the place with their indescribably wondrous fragrance. It was almost noon in Paradise. 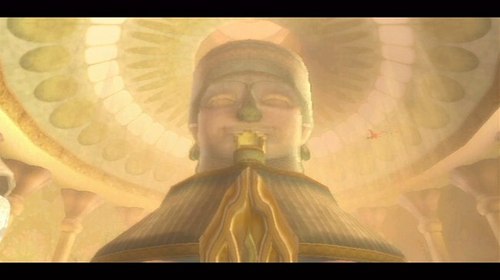 The Ancient Cistern surely remains one of the most intriguing segments of The Legend of Zelda: Skyward Sword. Its extremely likely basis in this legendary parable only adds to the mystery and beauty of the dungeon. The ability to deftly weave a piece of philosophy into a piece of game design is a true mark of craftsmanship. Next time we travel through the faded golden halls of the Ancient Cistern, maybe we should think about the duality of compassion and selfishness – it’s most likely what the developers had in mind, at least.

Sources: Nintendo Blast, Translations and Such