The Legend of Zelda in One Word: Balance

Posted on April 16 2013 by Dathen Boccabella

The rising sun will eventually set,

A newborn’s life will fade.

From sun to moon, moon to sun…

Describing anything in just one word is always a challenge, let alone something as vast as 25 years of The Legend of Zelda. Zelda is gameplay; Zelda is story, Zelda is inspiring, Zelda is music; and Zelda is so much more. And yet, there has always been one word at the forefront of my mind that sums up the entire series for me, without me having to struggle to narrow it down to just one word. To me, Zelda is summed up by the simple word of ‘balance’. Now allow me to explain why in the following 1110 words or so.

There really is no clear cut place for me to start, or even list of points to make, because balance is woven so intricately throughout the whole series. Nevertheless, the Triforce is where I will begin. Ultimately, the Triforce is the center of the Zelda mythology, and in and of itself represents balance. As Sheik says, “it is a balance that weighs the three forces: Power, Wisdom and Courage”. It is the unison of the three divine forces, left behind by the Goddesses in perfect balance, which watch over Hyrule.

As we also know, the Triforce is not just balance itself, but the act of possessing the Triforce in full requires a balanced heart. As Sheik goes on to say, “If the heart of the one who holds the sacred triangle has all three forces in balance, that one will gain the True Force to govern all. But, if that one’s heart is not in balance, the Triforce will separate into three parts.” We see this in Ocarina of Time where Ganondorf touches the Triforce, but only receives the Triforce of Power. We also see this in The Adventure of Link backstory where the Prince could “inherit the Triforce only in part”. On the other hand, we also know of characters with balanced hearts using the whole Triforce, such as the King of The Adventure of Link backstory, and Link himself in A Link to the Past.

Now just as the three parts of the Triforce represent balance, so do the three who’s destiny it is to bear those parts: Zelda, Link and Ganondorf. In his final speech in Twilight Princess, which was mostly cut from the final game, Ganondorf states that the three chosen to wield the crests “are always born into this world in perfect balance.” Zelda, Link and Ganon are all essential to the balance of the world. Without one of them in the equation disaster would ensue.

Take The Wind Waker’s backstory for example. Ganon was present, and potentially a Zelda, yet no hero could be found. The world was out of balance and chaos ensued. Ganon got out of hand and the Gods themselves had to intervene by flooding the world to restore the balance. In many ways it is the same as The Matrix Film Trilogy. Just as The One is the solution to the anomaly to keep the Matrix in balance, so Link, Zelda and Ganon are forever in existence, keeping the balance. When times become dark, Link and Zelda arise to restore balance. When the world becomes overly peaceful and quiet, then Ganondorf returns. It’s all about the balanced equilibrium.

I’m a big believer in the philosophy that nothing is inherently good, or inherently evil. Everyone is defined by the choices they make in response to circumstances. For every good choice there is also a bad choice. Ganondorf’s choice, revealed in The Wind Waker, is to take the lands of Hyrule, which he coveted, by force. It was a bad choice, as are his continuous actions to destroy Hyrule for all others if he can’t have it. Yet for every one of those choices there are those such as Link and Zelda, making the choice to leave their cozy villages and embark on greater quests for the good of the world. Choices are what make the conceptions of righteousness and evil. For every choice that leads someone into wickedness, there is a choice that leads another to good. There is always balance, just like Link and Zelda are there to balance Ganondorf. 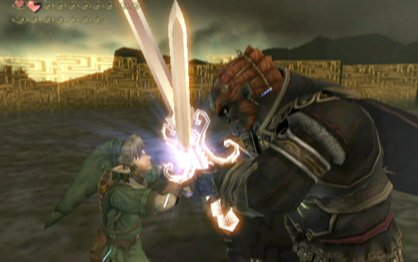 If either Link or Ganondorf truly defeated their adversary, then balance would be thrown out of order.

As The Wind Waker’s backstory shows, to tip the scales slightly is to risk everything. Too much either way is not stable. The despair of Ikana valley is too melancholic, and yet, the Music Box House is overbearingly optimistic. However, they manage to strike up equilibrium of sorts, for the betterment of that whole region. Balance is essential in Zelda – beyond the mere scale puzzles in The Temple of Time and Tower of the Gods. It is essential for the world. For Hyrule, and our world.

Look also at Symmetry City (also known as Symmetry Village) in Oracles of Ages. When the village’s sacred symbol, the Tuni Nut, breaks the city is said to have “fell out of balance” and a “volcano started erupting.” The lack of balance led to severe consequences and it was up to Link to restore that balance. It’s the law of nature really. The world keeps in perfect balance: day and night, the four seasons, land and sea. The healthiest lifestyle is one of balance. It makes me think of Pokemon: The Movie 2000: “Disturb not the harmony of Fire, Ice, or Lightning lest these three Titans wreak destruction upon the world in which they clash.”

I mentioned earlier that Twilight Princess is the game that really adheres to the theme of balance, and Zelda’s concluding remarks really sum up this whole notion so well: “Shadow and light are two sides of the same coin… one cannot exist without the other.” Balance. For there to be good, there must also be evil. For somebody to be happy, somebody else must be sad. For someone to be well fed, someone else must go hungry. To me, this message of balance is the very heart of the Zelda series.

We could all strive to sum up The Legend of Zelda series with one word, and the amount of different responses would be vast. But I think we have the perfect candidate in the word “balance”. Not only does it sum up the perfect harmony in Zelda of gameplay, story, music and inspiration – but it also conveys what I see as the series’ most fundamental value; the deepest of all its many meanings: balance.

The rising sun will eventually set,

A newborn’s life will fade.

From sun to moon, moon to sun…