The Hero of Time a Prophet?

Posted on April 09 2013 by Dathen Boccabella 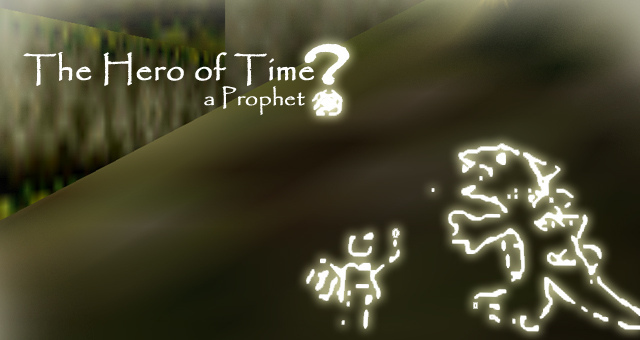 The following article is a theoretical piece, so please read it

with that in mind. It reflects the opinions and ideas of the author, and

not Zelda Informer as a whole. This article is also part of classics

month, and as such it may conflict with the recent release of Skyward

Sword and Hyrule Historia. With that said, enjoy the read.

The iconic carving on Link’s treehouse in Ocarina of Time is something that I have long pondered the precise meaning of. It depicts a sword and shield wielding warrior fighting a monster with his fairy companion. People have described the monster as a T-rex and even Godzilla. Some say that it is an Easter egg of Bowser. What exactly the creature in the carving is depends on what we take the meaning of the picture of be. It is a logical assumption that the carving was done by Link; after all, it is on his house. There are therefore two different explanations behind this picture.

Firstly, it may just be an expression of Link’s inner desires. Although a slight generalization, it is not absurd to say that most boys of Link’s age dream of being a mighty warrior fighting savage beasts. Being the only person in Kokiri forest without a fairy, it is only logical that he wished he had one of his own to fit in, explaining the fairy in the carving. Going by this analogy, the monster could really be anyone – a product of imagination. However, what if we take this carving to mean much more? What if we view the warrior as Link, the fairy as Navi, and the creature as Ganon? What if we take the carving to be the result of a more literal dream: a prophecy?

“Thy slumber these past moons must have been restless and full of nightmates… As the servants of evil gain strength, a vile climate pervades the land and causes nightmares to those sensitive to it… Verily thou hast felt it… Link…” -Great Deku Tree

These are the words of the Great Deku Tree to Link early in his adventure. They refer back to the opening sequence of the game where a sleeping Link dreams of his future encounter with Ganondorf outside of Hyrule Castle Town. From this we can establish that Link was having a prophetic vision of a future event, and adding to it the context of the Deku Tree’s quote, it is likely only one dream of many. If Link has prophetic nightmares of the future we do have to wonder what else he has seen, and why?

Has Link seen his future epic battle with Ganon, and then carved it into his treehouse. Many theorists say that visually the carving looks most like King Dodongo of all enemies in Ocarina of Time, which it very well could be, but is such visual preciseness an important element of foresight? Prophecy is generally hazy territory. Whether of King Dodongo or Ganon, the notion of a prophetic vision remains. However, a vision of the final showdown with Ganon seems much more appropriate for the overall game. Although not entirely discernible, most conclude that the warrior in the picture appears as more of an adult. If this is the case, is it possible that Link never made the connection between the adult hero and himself? At that time he was under the impression that he would always remain a child. 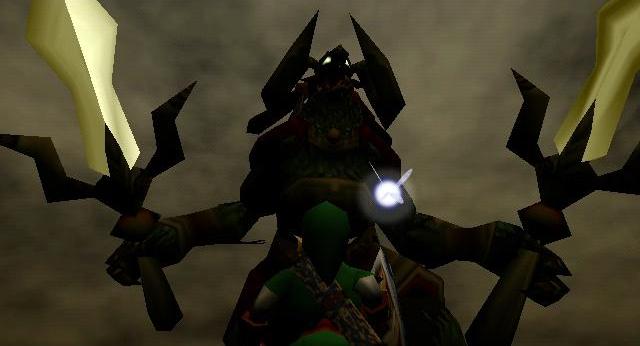 We will forever be left wondering what Link had seen in his dreams. Perhaps as he became the Hero of Time and grew into an adult he understood his dreams more. Perhaps he was only able to overcome great odds and save Hyrule because he had somewhat seen what he must do. We simply cannot do anything but speculate on that matter. What we do know though, is that Link is not alone in his special prophetic ability, as Princess Zelda also has visions.

“I had a dream… In the dream, dark storm clouds were billowing over the land of Hyrule… But suddenly, a ray of light shot out of the forest, parted the clouds and lit up the ground… The light turned into a figure holding a green and shining stone, followed by a fairy. I know this is a prophecy that someone would come from the forest…” – Princess Zelda

Zelda’s dream is much more symbolic, however her interpretation of the dream as a prophecy turns out to be justified when Link arrives with the spiritual stone. Zelda says that her father didn’t “believe it was a prophecy”, but Impa did, stating later to Link that her role “was to teach a melody to the one from the forest”. In this case the prophetic dream led specifically to action on the behalf of Impa. It makes you wonder how much Link knew he had to do as a result of his dreams. Interestingly, the Sheikah’s collection of legends are all very prophetically inspired – such as the tale of the True Force, or the Legend of the Temples; both spoken by Sheik. We could assume that these were taught to Zelda by Impa during her childhood. A man in Market town informs us that Zelda’s dreams are also regular when he says “have you heard that Princess Zelda sees prophetic visions in her dreams?”

After ridding the Forest Temple of evil, Link learns his true identity as a Hylian from the Deku Tree Sprout. Littered throughout Ocarina of Time are references to the Hylian people being known to have prophetic tendencies. Again in the Market a man explains that “we Hylians have big ears in order to hear the voices of the gods…but I’ve never heard them!” The A Link to the Past manual further supports this when it says that Hylian’s “long, pointed ears enabled them to hear special messages from the gods”. From this can we deduce that the Hylian people are known to be prophetic, but only selectively? Only those Hylians like Link and Zelda who have heroic and significant destinies that will affect the rest of the world hear the voices of the Gods through their dreams.

Some say that the prophetic visions come from the Gods, while others say that those with the instincts sense it when evil stirs in Hyrule. A hybrid is not out of the equation, where the Gods provide prophetic visions to guide those whose destiny it is to rid the land of evil. Link, The Hero of Time, sees parts of his epic quest in visions before he has even begun. Keeping all of this in mind, it is very likely that the carving on Link’s treehouse has a deeper meaning than the mere surface value interpretation of childhood longings. Whether we take it to be King Dodongo or Ganon, a vision inspired carving is very likely what this is. 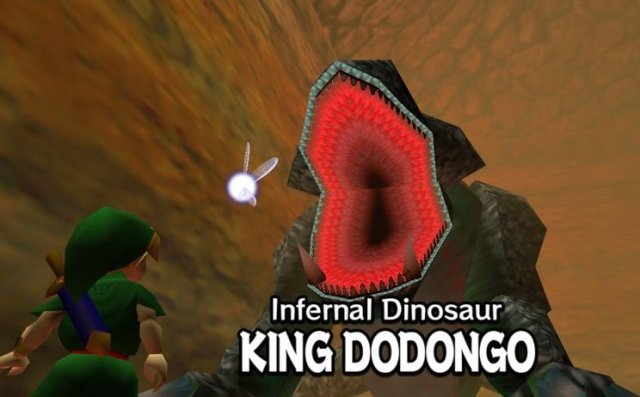