The Women of Legend: Hilda 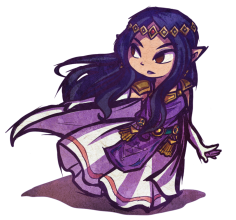 Tragic characters are not something we see much of in the Zelda series, especially not among the series’ villains. Ganondorf, Vaati, and all the one-off baddies are people we were happy to do away with, but then, A Link Between Worlds came along, and did something new. Not only did the real villain not reveal herself until the end, but she proved to be a truly relatable and tragic figure that we were sad to have to fight. Join me as I take a look at the ins and outs of one of the most well-designed and under-appreciated characters in the series: Princess Hilda. 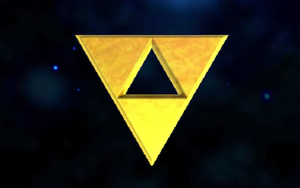 Hilda was subtly foreshadowed in the first chunk of A Link Between Worlds. Yuga seemed like the main antagonist the whole time, collecting paintings and getting ready to free Ganon, but after seeing him face-to-face with Zelda in Hyrule Castle, he mentions “Her Grace”, referring to someone that holds authority over him, which is odd to hear coming from Yuga. You soon end up slipping through a crack in the wall of Zelda’s Office, and come out in what appears to be a mirror image of not just the office, but the whole world. After Yuga finally prepares his alter and releases the demon king he seems ready to take Link out, and yet our hero is saved by the Hilda, the apparent owner of the royal office Link entered this new world from, and according to her, the Princess of the land of Lorule (The girl finally saves the hero. ’bout time Nintendo). 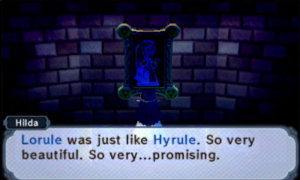 Oddly, Hilda’s dress and her office itself both display an inverted Triforce emblem, matching one that Yuga himself wears. This, along with his “Her Grace” comment he let slip before offer a hidden connection between him and Hilda. This does not get explained for a long time, but it puts many players on edge about Hilda. How does she know Yuga, what is the meaning of the breaking inverted Triforce in the cutscene after Ganon’s resurrection, and what is it about Lorule that she is clearly holding back? The periodic scenes with her speaking to Zelda’s painting don’t help us trust her must either. It’s the little questions she asks here and there. “What is it like to be a princess of a kingdom blessed so many happy endings?” and “Can you even comprehend how lucky you are?” Sure this helps us see why she is much more cold and weary compared to her Hyrule counterpart, but the dialogue just seemed like jealous or disdainful shots taken at Zelda herself. Besides, the simple fact that we see no more of Yuga for half the game, and that she is alive and well, hanging around with Zelda’s painting, is questionable. 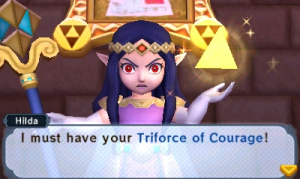 And finally, in Lorule Castle, as Link meets with Hilda again, we learn the rather simply-told, but powerful, history of Lorule, and the real reason for Hilda’s sorrow as its ruler. Lorule had its own Triforce and, after destroying it to stop Lorule’s endless wars, Lorule began falling apart. This is when we learn that Hilda is only messing with Link – and controlling Yuga, apparently – for the sake of Lorule. The moment I realized you have no choice but to fight her, I loved her as a character. I feel like it would have been a better move, story-wise, to have you beat Yuga and then have Hilda fight you of her own volition, since that would better solidify her goal, but oh well. Either way, her willingness to do what no one else will to save her world is quite sad. The one person who still believed in her, Ravio, ran to avoid falling to her and Yuga, and while she said she was “led astray, tempted by the power of the Triforce”, I doubt there was any outside force that was changing her mind in any way. Even when she lost the Triforce, and Zelda was set free, she was ready to fight in her weakened state, even if it meant dying for her cause. 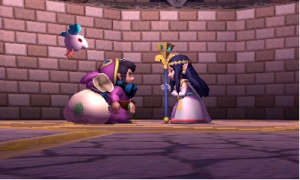 One thing that really rounds out Hilda’s greatness is her connection to Ravio. Before Hilda joined with Yuga to attack Hyrule, and Ravio still served her, I can imagine that he actually acted as an adviser or sorts, officially or not. She seemed to know him well enough to know when he ran, and she was willing to listen to reason when it was him speaking to her. I loved that. As much as we all like Zelda, in her many iterations across the series, she often seems too… solitary, as a ruler. As if she never needs help. Ravio showed us that, in many cases, Hilda is better off finding council and comfort in the company her friends, or even an actual royal council. Having that flawed of a character that we can still understand is often preferred. 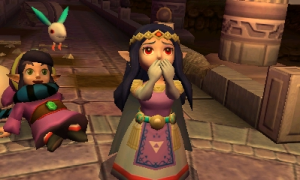 I have gone on record to say that a Lorule-centric Zelda spin-off would be fantastic, and Hilda is a massive part of that. She is an outlier in the world of Zelda, particularly among its rulers, in that she is fully willing to question morals for the greater good. The closest cases of previous rulers doing this would likely be Zelda’s surrender in Twilight Princess, or the King in The Wind Waker wishing for the flooded end of Hyrule. Both were for the safety, or at least the potential benefit, of their people, but Hilda is quite the extreme case, since she was much younger and likely inexperienced in such drastic situations, and she was sacrificing an entire world for the sake of her own, even though she really did have the option of stopping. Whether it was seeing her use that mighty powerful magic of hers, or seeing her cry happy tears as Zelda and Link restore life to Lorule, she was a great character to see throughout the game. In the end, she showed more depth with so little screen time than many past Zelda characters, and I will continue (probably hopelessly) wishing for a Zelda spin-off starring Ravio and this awesome purple-haired princess. 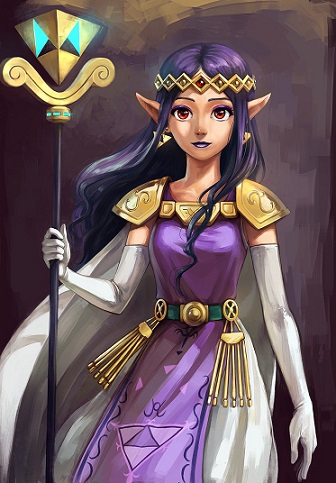 “Farewell, Hero of Hyrule… We shall meet again…” – Princess Hilda