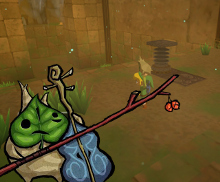 Well… it’s time for me to review this dungeon, I suppose… You know, Zelda has an odd history with wind or air themed dungeons. I hear there was going to be one in Ocarina of Time before it was cut, and of course Majora’s Mask didn’t have any dungeons dedicated to such a theme, but then The Wind Waker came along and introduced the Wind Temple. And it was a must, wasn’t it? I have no doubt that the Earth Temple was a concept decided on second, after Nintendo determined that this wind-themed game must have a wind-themed dungeon. Now, the next wind dungeon in a home-console game was the City in the Sky, which I’ve talked about before and loathe. But it’s predecessor? I dunno. It’s nowhere near as offensive, but it’s not good by any means.

I’ve given most of The Wind Waker’s dungeons a fair amount of criticism, even a little bit for the ones I’ve liked, but I think that the Wind Temple is the single worst of the game, and possibly the only outright bad one. That’s a big claim and one I ought to justify, so let me begin to do so by asking a question: Why should I play through it, barring a desire to simply progress through the game? What does the Wind Temple, per se, have to offer?

Beginning with its thematic design… I can’t think of anything. Certainly the choice of colors and lighting in this dungeon — the entire dungeon looks a little yellow or orange — is an interesting choice to associate with the wind theme, but I cannot consider it a plus point because nothing is done with it. The lighting in the Forbidden Woods is much the same, if much heavier, but it was excellent and added a lot to the atmosphere. The Wind Temple’s atmospheric effects do not synergize with its concept or design. Instead they conflict with it; I would not think yellow or orange would be colors associated thematically with wind unless it’s in reference to summer air or radioactive wind, and obviously neither is the case here. Again, this could have been an excellent conflict that would have created a really, really unique feel for this dungeon had Nintendo expanded on it at all. But it’s just there without expansion, and the coloring is put to basic cavern rooms with some plants and grass, and basic stone constructions built within them. The architecture is barebones, with minimalist and conflicting atmospheric effect choices, the only good one of which is the simple particles floating through the air, but this is something that’s overdone in the game by this point and offers little in terms of fresh atmosphere.

Of course there’s a few metal grates, contraptions and the like to add to the dungeon’s visual theme, but none of them are interesting, and the dungeon as a whole is thematically boring. The Easter Island-esque statues are certainly neat-looking, but they may be the lone high-point of the dungeon’s visual design, which overall just doesn’t impress. Quaint little statues can’t change that.

The one saving grace on this note is the dungeon’s music, which I actually think might be one of the game’s best dungeon themes overall. The Wind Waker basically established the atmospheric dungeon music tradition after Majora’s Mask started it a bit with a few of its dungeons, making the music more subtle while in the dungeon to emphasize its atmosphere rather than provide cool listening in and of itself, but I think the Wind Temple — while managing an excellent windy atmosphere regardless — actually sounds pretty cool on its own. I can listen to this, and it brings me back to the Ocarina of Time dungeon themes, which always managed to help establish awesome atmosphere while still being cool to listen to on their own. It’s not quite in the same league and it could be something a bit more interesting, certainly, but it’s a nice theme and one of the dungeon’s three lone strengths, the other of which I will get into shortly.

This problem, of the dungeon offering nothing but boredom, unfortunately carries over into the gameplay, both in puzzle-solving and navigation. Mostly the Wind Temple plays off things established in other parts of the game, and often does them exactly the same or actually offers less. A perfect example is Makar, who as a dungeon partner is far less interesting than Medli. Medli could carry Link over gaps and reflect light with her harp to interact with some interesting reflection puzzles. Makar cannot carry you, so his only talents are flying all on his own to flip switches, drop little seeds in patches of dirt to effectively… flip more switches. In fact, this is the entirety of his talents: He flips switches; he’s a switch-flipping kind of guy. When he’s not doing that, he gets captured and requires saving. Controlling a boring little guy to do a mundane task you normally do yourself is not interesting, unless it’s a part of some really elaborate switch puzzle… which it isn’t. Makar getting captured could be really interesting in a dungeon that actually plays off it and makes it epic… which the Wind Temple doesn’t. Again, Makar offers nothing and manages to be much more boring than Medli. He should have had unique and fun talents of his own, rather than less talents that are less interesting.

Flipping grates with wind switches offers no real new gameplay either, and is basically just a minimal navigational quirk. There are some new gliding moments that offer a bit of challenge, but that challenge offers little more than redundancy; if you do fall, the only punishment is just doing it again after restocking your Magic Meter, and it’s not really a stimulating experience to begin with. The few new elements the Wind Temple introduces are either tired concepts from earlier games, or are terrible. The blade traps and floor spikes from previous games return, but they do not offer anything interesting. The Hookshot is used to navigate the dungeon, and while it has a little bit of interesting interaction with the Iron Boots, that is short-lived and the dungeon really just asks you to use it to make it to a bunch of Hookshot targets, again offering nothing for your trouble rather than the bare-minimum: Basic game progression.

The one truly new thing for this dungeon is the central room with the huge wind fan, but it’s a pain to use. Trying to get both Link and Makar up this room to a specific floor — especially if it’s not the very top — takes way longer than it should, and doesn’t control reliably. This is especially a problem with Makar, whose flying controls are completely unreliable at best, and downright infuriating at worst. If by (incredibly likely) chance you fly up past the floor you want to go to while controlling Makar, then attempt to stop tapping the button that makes you go up, he will very quickly stop flying entirely and fall to the bottom, likely getting hurt in the process, canceling the control and requiring you to play the Command Melody. Again. It’s just painful. Why someone who needs to fly would not learn how to simply descend, I do not know. Perhaps Makar is in fact stuck up, and simply gets bored with you when you tell him to go down? After all, the little guy always has the same expression; we don’t know what he’s thinking all the time, and he does insult your conducting skills if you don’t play the right song! Eh, I’m getting off-topic.

There aren’t even any new foes for this dungeon, barring a new variety of Wizzrobe, though admittedly these enemy-summoning Wizzrobes are pretty epic, and none more so than the special miniboss variety. The Wizzrobe miniboss summons swarms of weaker enemies alongside a few more powerful ones like Darknuts and lesser Wizzrobes, and actually manages to be an extremely epic fight that finally does proper justice to The Wind Waker’s amazing miniboss theme. I might even say this is my favorite miniboss fight — if not my favorite miniboss concept — of the entire series, and it can even be a bit challenging if you’re not conservative and cautious, and coming from The Wind Waker — the game where there’s a dungeon boss who can’t hit you if you stand still and another one that you can beat in 30 seconds — that’s pretty surprising.

The surprise doesn’t end there, either, because the main dungeon boss, Molgera, is pretty amazing too. Perhaps still a bit too easy for a full-on boss, because her attacks are pretty easy to predict, but still challenging in that the fight can quickly overwhelm you with Molgera’s children while forcing you to simultaneously contend with moving sand that can pull you into Molgera’s jaws, or Molgera herself as she flies around the room and attempts to dive into you. With the boss doing a sizable amount of damage with each attack, it’s actually a pretty darn fun battle, and its got what I consider to easily be The Wind Waker’s best battle theme to go with it; it’s up there in terms of boss quality.

So, let’s return to my question from earlier: What does the Wind Temple have to offer? It offers only three things. It has an excellent soundtrack throughout its entirety, while both navigating the dungeon and fighting its bosses. It has one of the best miniboss battles of the series. And it has a cool main boss. Aside from these things, it offers only the barest minimum of things to do. It’s a boring dungeon with only a few really high points, so I can’t really praise it overall. It’s one of The Wind Waker’s — and indeed, the entire series’ — worst dungeons (though it doesn’t come anywhere close to being as bad as the City in the Sky, even if I wonder what’s up with Nintendo’s recurring difficulty with wind-themed dungeons) and it’s also my least-favorite of the game… but man are those battles cool!

So what about you? Did you like the Wind Temple, or did you think it was extremely boring, like me? Do you have more to add regarding what this dungeon offers? And what did you think of its fights and music? Tell me in the comments, and look forward to next week when I review The Wind Waker’s last dungeon, Ganon’s Tower!