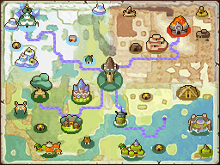 I think New Hyrule on the Adult Timeline would be the ideal setting for the next major Zelda release on home console. This is a sentiment I’ve expressed before on the Curiosity Shop, but I haven’t gone in-detail about it before now. New Hyrule is the land settled by Link and Tetra after The Wind Waker and Phantom Hourglass, featured as the main setting of Spirit Tracks. I think there’s plenty of potential for this setting in another game. Before I get to explaining why, realize I don’t necessarily mean to limit this future game to the locations we saw in Spirit Tracks. There’s more potential for the setting and it’s concept than what we saw in one game, as I will get into.

My first major reason ties directly into what little we know about Zelda Wii U right now. Zelda Wii U is going to be about breaking conventions. Specifically, Aonuma has discussed making the dungeon order more open and making it so there’s a way to interact with other players. The idea of breaking convention, and trying different things, would make New Hyrule a thematically perfect setting; though we have seen it in one game already, it’s still a new land, and largely uncharted territory.

While The Wind Waker ended with the idea that Link and Tetra would find and pioneer a new land, neither Phantom Hourglass nor Spirit Tracks really capitalized on the concept; Spirit Tracks simply took place within a pre-discovered land. The idea of an uncharted new continent is still an unexplored concept, ripe for use in Zelda Wii U and other future games. 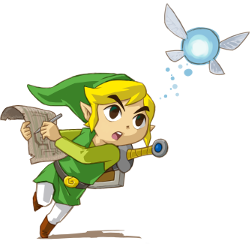 Zelda Wii U could be a prequel to Spirit Tracks and deal with the discovery of the continent, but that’s not the ideal way to do it. Instead, let’s just go with an obvious assumption: There is much more to this continent than we have yet seen. We never saw that much of New Hyrule because we traveled across its bulk on a train rather than exploring it personally, so many locations between the ones we’ve seen could be added. Beyond that, what of the world outside? I find it doubtful New Hyrule took up the entire continent, so the country could expand, not to mention we could spend the game, in part or in full, exploring other lands or unpioneered wilderness.

It doesn’t really matter how you do it, though. The bottom line here is that regardless of how Nintendo chooses to depict the setting of New Hyrule and the continent on which it’s situated, the real benefit of this setting is that it carries with it no expectations. The development team does not need to fret over making sure to include a familiar, recognizable Death Mountain, or a Lake Hylia, or a Kakariko Village, or any such series landmark; it’s a new world, and though we might see locations and races from Spirit Tracks, it’s the perfect way to introduce us to entirely new and fresh places that aren’t necessarily tied down by the tropes we’ve come to expect. A few Zelda games have gone this route and given us very new environments not yet seen in Zelda games, such as Majora’s Mask, and even games with largely traditional locations still throw out a brand-new idea or two, such as Lanayru Desert and perhaps Skyloft in Skyward Sword. So it’s not like this has never been done before, but New Hyrule is a great excuse to do it again.

If it were set in the familiar Hyrule, wouldn’t we expect it to look like the familiar Hyrule? Of course all of us will want to return to Death Mountain and the like someday, but having the next game set in a new region will give us the opportunity to explore new and exciting locales before returning to the familiar ones on other timelines. It’s an exciting opportunity, and one that matches up with Nintendo’s stated game plan.

What’s Already There is Interesting 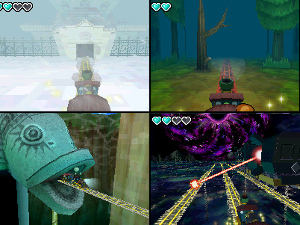 Exploring new ideas is of course exciting, but there’s also plenty of things that we saw in Spirit Tracks already that could make another look at its world — especially in a 3D home-console game — especially exciting. An entire snow region — one not based in a mountain — is one such advantage of the familiar New Hyrule. There’s the creepy, dark, and dangerous version of the Lost Woods — a take on it that we haven’t seen since the Lost Woods-esque portion of the Royal Valley in The Minish Cap — which could make for a relatively refreshing take on the area even if we’ve seen places by that name in many other games; a dangerous, shadowy forest is significantly different than the current popular image of the Lost Woods. There’s a coastal region, not seen since Majora’s Mask, and even better, an underwater region. There’s the entrance to the Dark Realm and the abundance of towns; if those towns were to appear in Zelda Wii U, then it would give the game a much bigger sense of community than most Zelda games we’ve seen. And finally, there are Anouki and Lokomo among the civilized races, and the Geozards, Phantoms, and multiple ‘blin varieties among the enemy races.

The potential of some of these locations and enemies, if re-explored, ought to speak for itself. Imagine acquiring a means of staying underwater at length and exploring entire underwater sections of the game? How about an entire winter-themed region? A dark, scary forest with ominous lighting and low-visibility? Many towns with their own NPCs? A scary demonic realm to visit at the end of the game? Better, imagine this in a high-definition game, which Zelda Wii U will surely be. It’s guaranteed that Zelda Wii U will be a visual feast, and are these not some excellent ideas for visual spectacles? Imagine seeing richly textured falling snow, transparent and reflective ice, underwater areas bright with coral and fish, or dark with striking lighting, in the next Zelda game.

How about seeing some of the central enemies of New Hyrule in HD with new, more detailed designs? The fishman-esque Geozards look like they would be awesome enemies to see in a 3D Zelda game, and the same applies to the Phantoms in their many varieties. The various ‘blin enemy types found in Spirit Tracks allow for the return of the Bulblins and Bullbos from Twilight Princess, alongside the devil-like Miniblins from The Wind Waker, among still new varieties; it’s clear New Hyrule has a huge population of goblin-like creatures. 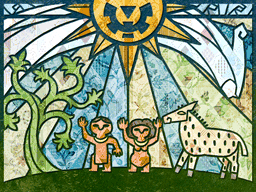 And even aside from specific locations and characters, think about the overall style of Spirit Tracks: It’s the closest the series has come to the steampunk style that some fans call for in the series. A game running with Spirit Tracks’ themes could expand on the steam technology and give us a very fresh style. It need not be a series standard; each Zelda game tends to put its own spin on the look and feel of the Zelda world.

And beyond that, there’s the themes present in Spirit Tracks’ story. New Hyrule has its own guardian deities in the form of the Spirits, and the intro of Spirit Tracks implies that the land on which New Hyrule was founded had its own natives at one point. So even apart from technology and steampunk, New Hyrule has themes of mystical spirits and ancient tribes to explore. Having spirits — in the multitude — instead of specific gods, is an unexplored concept in the series, and it has a lot of potential. Having primitive tribes — of a truly classical, primitive tribal nature and not simply one of the many “Tribes” that populate the Zelda series — alongside a more advanced culture, or instead perhaps lost tribes that must be rediscovered, is an equally cool concept. And again, both of these themes could be expanded to create something fresh and visually impressive for the high-definition, supposedly convention-breaking new game.

There’s plenty more than can be done with the world, characters, and concepts present in Spirit Tracks, and all of them jibe pretty well with what we’re expecting of Zelda Wii U.

Every Zelda game tells its own story, one that is, to some degree (usually high!), independent from other games in the timeline with only loose connections. But that said, now that Nintendo’s taken the time to differentiate three different timelines and canonize which games go in which order, it’s started to become clear that there are certain things going on with each timeline. The Adult Timeline in which New Hyrule is founded is no exception. 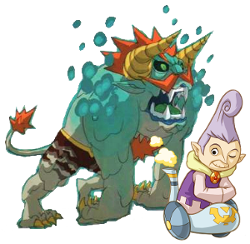 There are three major aspects of New Hyrule and the Adult Timeline that could make for an exciting story. The first is Demise’s curse. His curse introduced the threat of Ganondorf, the series’ chief villain. During the events of The Wind Waker, Ganondorf was killed, and seemingly for good. Every game afterward on the Adult Timeline has had a new villain, though Malladus was strikingly similar! With Ganondorf dead, it’s easy to look at Malladus as a potential successor or fellow incarnation of Demise’s curse — he is another Demon King after all — and either way, the absence of an incarnation of Demise’s hatred means a new incarnation is inevitable. Might the new incarnation be a new Ganondorf like what happened with Four Swords Adventures on the Child Timeline? Perhaps, but with the Gerudo absent, that’s unlikely. More likely: The next game on the Adult Timeline will feature an entirely new incarnation of the curse. A brand-new central villain for this timeline, or a succession of new villains for each game, could be very cool for creating something refreshing to go along with the convention-breaking theme.

Branching off from Demise’s incarnations, there’s still the rest of the demons. Apart from Skyward Sword, the only other game in which the Demons are discussed as a threat of similar caliber and described with similar language is in Spirit Tracks; Demons are prominent on the Adult Timeline, and have threatened the new continent en mass before. A new game set in New Hyrule would be the perfect time to expand on Skyward Sword and solve a few mysteries for the Zelda fanbase, giving us more detail or at least some cool additional depictions of the Demon Tribe or even their own world, as it seems that’s what the Dark Realm is.

And finally, just as the setting itself — the locations, the creatures — isn’t limited by expectations because it is new, the same goes for its story and mythos. New Hyrule is a new land, and while it likely still falls under the jurisdiction of the Golden Goddesses, it has its own deities and its own mythos. While other timelines and their settings can continue the lore we’re used to, New Hyrule in Zelda Wii U would be an opportunity to craft new lore. To show us new gods, new forces, new threats, and new concepts; it’s a chance to add a whole new section to Zelda’s mythos. 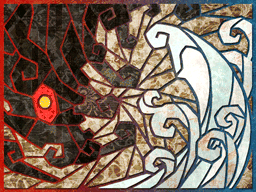 These are the big reasons why I believe New Hyrule, and the current place on the Adult Timeline, would make for the perfect setting for Zelda Wii U. All of the benefits would go together with the development team’s mission quite excellently, and it would offer a lot of cool new ideas and opportunities to impress us visually, while moving away from and yet building on the series history wrapped up in Hyrule Historia.

If it’s set in New Hyrule, Zelda Wii U is an opportunity to craft an entirely new chapter in the Zelda series, indeed in its timeline and mythos. This setting provides an opportunity to explore under-utilized ideas from Spirit Tracks as well as earlier games on the timeline like Skyward Sword, along with completely new stories and adventures. It’s a great opportunity, and in my opinion, the best fit for Zelda Wii U. Surely I haven’t thought up every possible benefit of this setting, but nonetheless I’m already very excited about the prospect. Are you?