The New Adventure Of Link: Another Look At The Story Of Breath Of The Wild 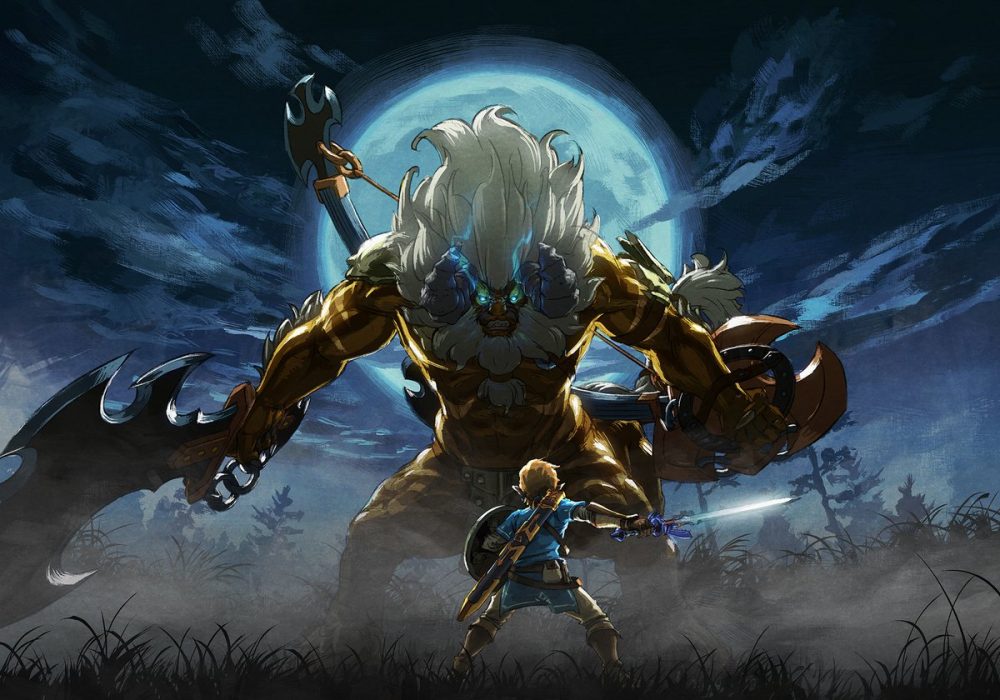 The Legend of Zelda: Breath of the Wild has received much praise from both fans and critics alike since it first came out about a year and a half ago. However, one aspect of the game that has received particularly mixed opinions is the game’s story. Some claim that it has one of the better stories in the franchise; others regularly express their disdain for it. However, while I understand why some might not enjoy the story of Breath of the Wild, I am here today to share my belief that the game has one of the better stories of the franchise.

Now, understandably, what most people complain about and think of as the story of Breath of the Wild is the Main Quest of the game – going to the homes of the Zora, the Rito, the Gorons, and the Gerudo, taming each divine beat, and avenging the fallen champions. And if I were to only look at this as the game’s story, I wouldn’t like it much either. And if you did focus only on the main quest, it was surprisingly short, with only four dungeon-like places. And they technically weren’t even needed to beat the game! Many players – myself included – were very unimpressed with the locations things that are basically exalted Shrines. By itself, the main quest was kind of unimpressive. 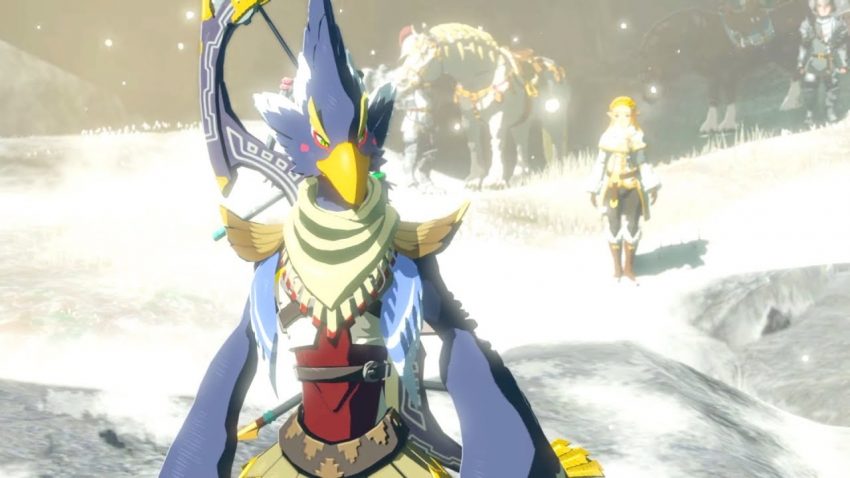 However, there are other parts of the story of the game that I consider other than just the main quest. The first is the story of the Champions. Originally, like some, I had thought them to be shallow characters with little involvement with them. However, I’ve found that this just isn’t necessarily true. At first glance, sure, they are rather shallow. However, through the memories Link uncovers of them, through the cutscenes of them in the Champions’ Ballad, and through the extra dialogue that they have after beating each of their Divine Beasts multiple times, their characters are shown better. Revali is a stuck-up jerk at times, to be sure, but he’s also determined to help protect Hyrule, and to flaunt his feathers as he does so. Despite being a powerful warrior, Daruk is normally fairly chill, though he is not without his own weaknesses and fears, however silly they may be. Urbosa is protective of her people and Princess Zelda, and she’s just all-around hardcore.  Honestly, Mipha is the most one-track character in the game; however, she has an enjoyable character as well. She’s kind and looks out for others, and while she is the princess of her people, she has her own shortcomings and embarrassments.

The second part of the story of Breath of the Wild that I consider is in regards to the sidequests. While many can barely be considered to have stories in the first place – such as simply gathering a few lizards for some random guy – some of them actually have rather interesting stories. One sidequest that I especially became invested in as I was playing the game recently was “A Wife Washed Away”. This one involves finding a missing Zora wife and mother who was washed downriver during Vah Ruta’s storm. I was legitimately interested to find her for her family. As I was progressing through it, I asked myself, “Nintendo wouldn’t do something as graphic as to place a dead Zora’s body somewhere, would they?” though I was sure that they wouldn’t. At the time, I had forgotten that that exists in Majora’s Mask. 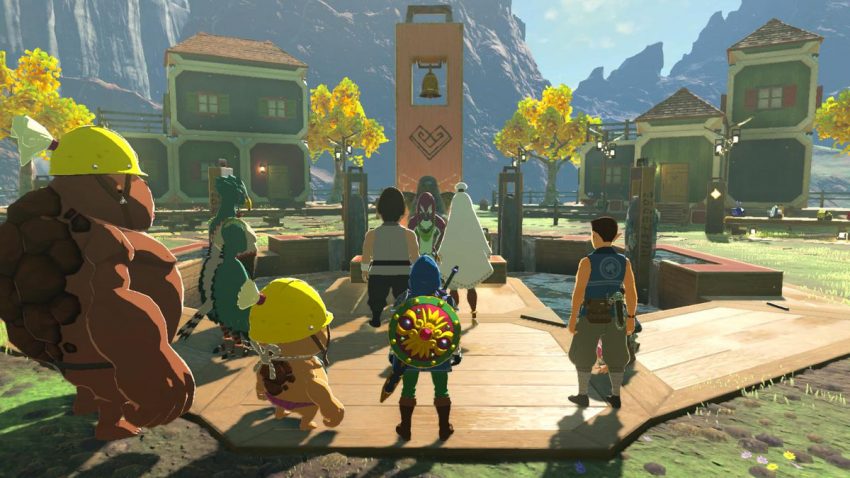 And I can’t neglect to mention “From the Ground Up”, in which you help Hudson the carpenter build Tarrey Town from the ground up. Along the way, you help people of every race in the game find that which they’ve been looking for and see them develop relationships with each other. In essence, this sidequest is a story of wandering Hyrule, finding unhappy characters, and directing them to somewhere that will be good for them.

Of course, there’s Kass and his chain of sidequests as well. I’ve been recently working to find and complete every Shrine in Breath of the Wild. Because of this, I’ve grown to appreciate him far more than I had. He’s on a quest of his own – to search out the locations listed in his late master’s songs and to search for their meanings. Many of the songs reference Link himself as “the Hero” or “the Chosen Knight” or something along those lines. As I completed each quest he gave me, I wondered if he’d manage to figure out who Link actually was. He certainly never gave a comment on it. That is, not until I completed all of his quests and found him once more in Rito Village. He told of who his master was and sang his most important song. After this, he turned to Link, and asked, “So…appointed knight. Will you accept this song from my departed teacher?” It was so satisfying to me to see someone who did not know Link one hundred years ago figure out who he truly was. And this is how each sidequest goes – big or small, each one is a story all its own.

A third major part of the story of Breath of the Wild is the story of you as the player and the choices you make. Where you go, when you go there, how you get there, and your reaction to it – each of these factors is part of the player’s story. Your story is also affected by which weapons you choose to use, what enemies you fight, how you fight them, and even the times you fail. This story is more personal and unique for every single person who plays it. 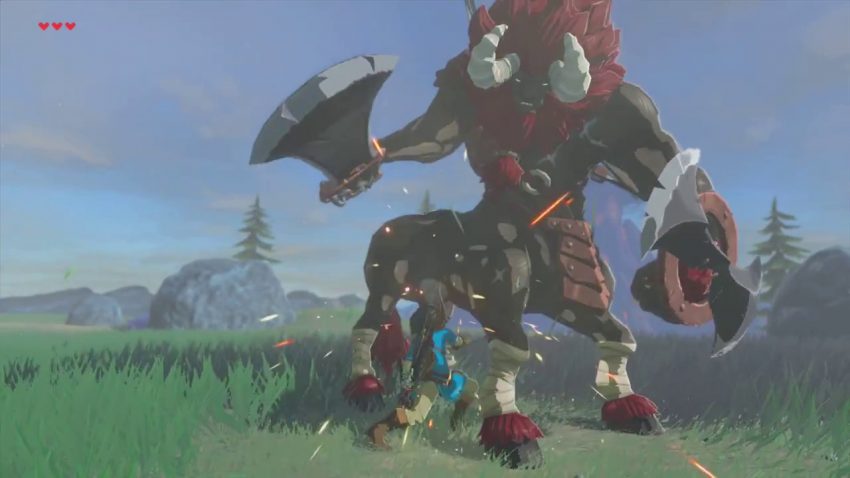 For example, part of my story involves defeating the Lynel above Zora’s Domain early on in the game. I had very few hearts and weapons that dealt no more than twenty damage each at the most. I was working toward getting into my first dungeon of the game, Vah Ruta, and I needed to get a bunch of Shock Arrows from a peak near Zora’s Domain where a Red Lynel lived. I kept trying to get the required number of arrows without being noticed. But time after time, I was seen and promptly killed. After about half an hour, I decided that I had had enough of messing around with that thing. I decided that if I couldn’t stealth my way around it, I could fight my way through it. Because of where I was in the game, I was at a massive disadvantage, and I died several dozen times. Each time though, I managed to get better at Perfect Dodges to deliver Fury Rushes. Every time I took even a little bit of damage, I’d rapidly open my inventory and eat to get my health back. Eventually, all of my melee weapons broke, and by now, the Lynel’s health was incredibly low. In a fit of desperation, I pulled out one of my bows and began firing arrows at it. After just a few hits, I finally managed to fell the great beast. Triumphantly, I collected the Shock Arrows that I needed, before sidetracking to get more weapons and food. That was one of my favorite moments from playing that incredible game.

Lastly is what I believe to be the most important part of the story of Breath of the Wild. This game, at its core, is Link’s story. As he journeys through Hyrule, he recovers the lost memories of his past, putting together who he used to be and rediscovering who he is. As he does so, and as he progresses through the main quest, he accepts the failures he made in his forgotten past, moves past them, and does his best to rectify them. While the Divine Beasts themselves were not incredibly interesting, I enjoyed the cutscene at the end of each one, where the Fallen Champion talks to Link. It always seems to me that these scenes provide Link, the Fallen Champion, and the Champion’s people the closure that they all needed. It has also been stated in the official Creating a Champion book that Link is able to act more freely after the Shrine of Resurrection, not having the same responsibilities he had as a knight. Overall, this is the story of one single Champion who still remains following the Calamity, of him growing, healing, and helping others.

You don’t have to like the story of Breath of the Wild, even if you do listen to my perspective. But I believe that it would be a tragedy to look at the story as only that of the main quest and to miss some of the most important factors of it. Because the only other major characters that are there aren’t even prevalent enough to steal his spotlight, this game, possibly even more than any other Zelda game, is Link’s story. Thus, the story of Breath of the Wild stands out to me as one of the better stories in the franchise.

Comments
Sorted Under: Breath of the Wild, Editorials, Editorials, Games, Slider
Tagged With: No tags were found for this entry.