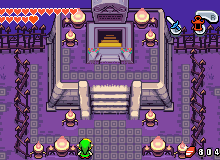 Gonna be a short review this time, since, well, we’re reviewing The Minish Cap’s sole mini-dungeon: The Royal Crypt. It’s not really a dungeon to be honest; it lacks all of the hallmarks of one, with no Dungeon Map, Compass, Big Key, or main item, and it has no map screen of its own. That said it functions enough like one with the puzzles and collection of keys to advance that some would count it, and I’m including it for completion’s sake as I’ve done with other games. So enough of this talking about qualifications, let’s get to it!

Visually the dungeon pretty much looks like how you’d expect. It’s a series of stone rooms built to contain royal remains. The fact that the area is a crypt is actually not terribly obvious, and only comes into play in the room where you speak to King Gustaf’s ghost and in the skulls you see along the walls from time to time. The rest of the dungeon is mostly stone walls and ragged carpets, though some classic crypt architecture is still visible in those walls. Part of me wishes they’d pulled some of the colors and ideas from Royal Valley into this mini-dungeon: Purples, candles, and metal fencing or grating. Or, at least, made it even more regal-looking. It could have been more distinct, but as it is it’s alright; it looks nice at any rate.

The coolest thing about the Royal Crypt is probably its nods to the original Legend of Zelda. The most obvious example of this is the dungeon’s music, which should be recognizable to most Zelda fans. It’s an epic spooky rendition of the dungeon theme from the first game. It’s altered to give the dungeon a haunted castle kind of flavor, but it’s not that different from how it sounded in the first game. I think that’s cool because essentially it’s drawing on an unused potential for this theme that the first game never capitalized on: It’s great music for spooky areas! Aside from that, familiar sound effects from the first Zelda game play when you reveal the keys, and the last fight against Gibdos has torches in the corners shooting at you during the fight, much like the flame-shooting torches in the first game. They’re all cool nods and they work in a neat way thematically with the burial tomb for old kings.

Gameplay-wise, the mini-dungeon is, of course, extremely brief. A couple of short battles against one of the game’s toughest foes — Gibdos — is a good challenge to have when the dungeon is so brief. The Door Mimics first appear here and are… well, they’re not challenging, but they’re a fun surprise at least! The main “meat” of the dungeon, if it really has any meat, is the room where the player needs to collect two keys, each a miniature obstacle course that has to be navigated while their Link clones are out, preventing those clones from hitting walls or enemies while navigating them to the end to flip the switches and collect the key. They’re fun, and might take a few tries, but they get easy after doing them enough; these moments are a bit challenging but not obstructive.

After getting the keys and a few more quick fights… that’s it. You collect the Gold Kinstone Piece and get out. Very short, like I said. 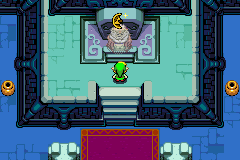 It’s a good mini-dungeon. It provides some nice little challenges and puzzles, but not too many and it’s over very quick. A fun distraction, but in my view it’s a little disappointing after Royal Valley, which in my opinion is one of the most visually distinct areas of the game. I’d have liked to have seen the Royal Crypt fleshed out into a full-length dungeon, including some of the cool art seen in Royal Valley. I feel like there was enough potential here for a full-length dungeon, and that having another one in the game wouldn’t have been a bad thing. Seeing a full-on spooky dungeon in The Minish Cap’s style would have been really cool. That may just be my personal love of spooky things talking, though! Regardless, the Royal Crypt does its job as a mini-dungeon and it’s an enjoyable, if brief, distraction. It doesn’t have any flaws, and even if it did it would be hard to complain about since it’s over so quickly!

So how about you? Did you like the Royal Valley, or did you have problems with it that I didn’t talk about? Do you think it should have been expanded into a full dungeon? Tell me in the comments, and look forward to next week when I review the dungeon where we finally collect the Wind Element, the Palace of Winds!