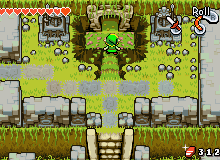 Encountered after journeying through the swampy Castor Wilds and dangerous Wind Ruins, the Fortress of Winds is a surprisingly simple dungeon. Just in case anyone gets the wrong impression of my overall opinion on the dungeon from the first things I’m going to talk about, I’ll clarify it here: I enjoy the Fortress of Winds and I think it’s a good dungeon. I’m going to start this review off with my criticism though.

The Fortress of Winds is very much like Deepwood Shrine when it comes to its thematic design. Both dungeons take a very straightforward and common concept — Deepwood Shrine was a forested temple, while Fortress of Winds feels like a trap-filled underground tomb or dungeon (actual dungeon, not dungeon-dungeon) — with little to no deviation or origination. The Fortress feels very much like a classic dungeon, the stereotypical image of an underground set of tunnels and chambers made of stone walls, filled with monsters and traps. It doesn’t do much more with this theme, so thematically it’s pretty bare.

But maybe that’s alright? It’s not a dungeon that excels in theme, and really few dungeons in The Minish Cap are, so its themes being at the bare minimum makes sense. The stereotypical dungeon is also not exactly used that often within the Zelda series. While the forested temple is actually a really overdone concept that’s been seen in many Zelda games — with not one, not two, but flippin’ three dungeons simply titled “Forest Temple” — dungeons that are just a set of trap-laden corridors made of stone are pretty rare. It’s the classic image of a dungeon, and one we don’t seem to get the chance to return to that often. Most importantly though, when you compare the Fortress of Winds to Deepwood Shrine, they’re almost on equal footing; neither does anything flashy with its theme, so Deepwood Shrine’s forest component doesn’t add much beyond the basic dungeon seen in Fortress of Winds. I’d say they’re at least equal on this front. And the Fortress of Winds does actually add one or two very minor things to the basic formula. It’s a fortress that’s set into a cliff, hence the Mole Mitts areas. Doesn’t really change the theme much, but it’s at least an addition. 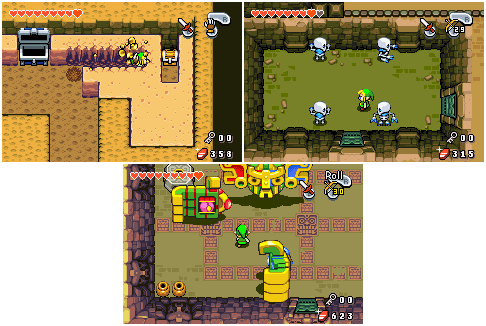 The Fortress of Winds’ music is pretty good, but not that impressive either. It’s got a good beat and sounds a little dangerous as befits the trap-filled dungeon. The deep noises make the dungeon feel intimidating, giving the dungeon the actual atmosphere of a fortress when its visuals don’t really communicate that too much. And its tempo makes it feel deserted and, again, a bit scary. Certainly, it was a surprisingly fitting theme to be playing during that one time I was replaying The Minish Cap on the toilet and a large spider came crawling across the floor. I feel it’s very underwhelming though. Deepwood Shrine’s was as well, but at least that theme didn’t come after some especially great themes. The music we hear associated with the Wind Tribe and this entire region of Hyrule just before the Fortress of Winds are the Castor Wilds and Wind Ruins themes, and next to them, the music that plays in this subsequent dungeon is neither impressive nor even fitting. Couldn’t it have been a theme in a similar style, but deep and foreboding to fit the Fortress itself? This is more a missed opportunity than anything else, but it’s still very unfortunate.

So, how about the dungeon’s gameplay?

Again the situation here is almost the same as with Deepwood Shrine. There aren’t really any very original concepts, and the ones that are kinda new don’t add that much other than what we’ve seen before — though, while the Mole Mitts digging sections fall under this, they’re enjoyable on a simple level and are frequent enough to be very entertaining — so it’s a pretty basic dungeon. However, I don’t consider it much of a drawback this time around. I guess the difference to me is this: While Deepwood Shrine is basic, it doesn’t offer anything else. It’s not challenge, nor thematically interesting. The Fortress of Winds isn’t thematically interesting either, but what it does offer is a lot of fun little challenges. It can be a bit difficult at a few points, especially if you don’t get used to fighting Spiny Chuchus, Sparks, and Stalfos. Navigating the dungeon does manage to feel very in-character, though, in that the level design itself supports the trap-filled dungeon aspect, and it really does feel like you’re exploring a set of booby-trapped corridors that used to belong to an ancient civilization, whereas the layout of the dungeon — horizontally wide, with multiple floors above, does bring to mind a fortress to me. It feels realistic in gameplay, and I always enjoy that in a dungeon. It plays like what it’s supposed to be. That’s at least a minor feat. 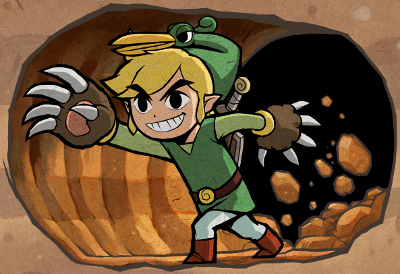 It’s also probably the most nostalgic dungeon of the game. Its basic theme coupled with many returning elements from older games — the Bow, eye switches, Stalfos, Wallmasters, Sparks, Armos, etc. — give it this status. If something isn’t going to be original, the least it can do is throw in as many familiar and beloved elements as possible, right?

The one major gameplay flaw I will say about it is actually a navigational one; for whatever reason (possibly simply how the Mole Mitts areas are programmed in the game), the Mole Mitts rooms do not appear on the dungeon’s map at all, and this makes navigating the dungeon unnecessarily confusing. It’s relatively easy to get past, but it’s definitely an annoyance that just shouldn’t have been an issue.

In terms of boss battles, the dungeon has another Darknut after the one in Castor Wilds (yet another familiar element), which is fine, and Mazaal. Mazaal is basically a copy of Bongo Bongo from Ocarina of Time and, more distinctly, Gohdan from The Wind Waker. It’s a disembodied head that attacks you with disembodied hands, which are among its weak points. Despite this very overdone boss concept, the concept of the fight itself is actually pretty cool. Making maximum use of recently acquired items to defeat the boss, the player must use the Bow to shoot Mazaal’s hands, the shrinking powers to enter the stunned Mazaal, and then attack its weak points after digging through dirt with the Mole Mitts. It’s a cool little concept with a number of steps, so I can write off the familiar boss design as a small issue, especially since Mazaal does still look somewhat original and especially cool-looking compared to Bongo Bongo and Gohdan. Those pretty colors! Unfortunately Mazaal is very easy, putting him in sharp contrast to the rest of the dungeon and making him just a bit disappointing overall. He’s just not a very big part of the game for me, you know?

So all in all, the Fortress of Winds has a lot in common with The Minish Cap’s first dungeon, but manages to overcome its problems a bit better. Some of them are still problems though. The dungeon could be more original in both gameplay and design, and its music is disappointing if not really downright bad, but at least it has the accomplishment of feeling realistic, of feeling like an actual and believable place in the game’s world just by exploring it, and at least it’s challenging even if its boss isn’t. Overall, a very basic, but pretty well-executed dungeon. I also enjoyed the end of the dungeon, where you don’t acquire the Wind Element at all at this time, but instead visit the top of the Fortress, read hints about the Wind Tribe’s whereabouts, and acquire the Ocarina of Winds. It was a cool surprise and a nice change of pace. 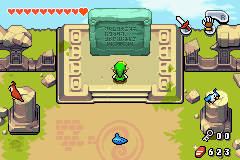 So how do you feel about the Fortress of Winds? Is its theme and concept too barren? Is the gameplay too familiar? Is its music too uninspired when put next to the previous areas’ themes? Is the boss too easy? Or do you think it executed all of these things well? Does the dungeon have other strengths? Tell me in the comments, and look forward to next week, when I review my favorite dungeon in The Minish Cap, the Temple of Droplets!