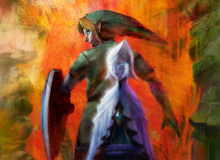 A little bit of irony occurred to me recently. In the Zelda fan community, the visual or art style of a Zelda game can be a really big topic. It wasn’t at all prior to The Wind Waker, of course; while Zelda games did still differ in style, I think most of those styles were fairly similar and any major changes were, by most, simply chalked up to technological advancements. Ocarina of Time pulled out a heavily anime-inspired look, but people didn’t notice it much because: “OMG 3D ZELDA!!!1!”

The Wind Waker of course was the game that drastically changed that, and it was hotly debated at the time. Then, after some more toon-style handheld games, we saw Twilight Princess with its still anime-like but much more realistic and gritty look. Then Skyward Sword came along, and while it was first teased in Twilight Princess’ style, it was another new look, again still like an anime but now with a much more equal blend of realism and absurdity with the impressionist look on top of it. And of course it’s all a big topic of discussion now. Was the cartoon style of The Wind Waker fine? Do we prefer Twilight Princess’ realism? Is Skyward Sword the perfect combination or an awful and awkward Frankenstein?

Well that’s where I’m going to get on with it as they say, because I think Skyward Sword’s case is the perfect example of the irony I’m talking about. People always say Skyward Sword is a combination of The Wind Waker’s and Twilight Princess’ visual styles, probably conceived to please both camps. But… that’s not the case at all, according to Nintendo. Of course one must admit that that’s basically what Skyward Sword’s art style ended up being, but that’s not why it was made that way. The art style of Skyward Sword was settled on because Nintendo wanted a style where exaggerations in the enemies’ bodies could indicate weak points, so there could be an interplay between the enemy designs and the Wii Motion Plus gameplay.

In fact it usually seems that, when it comes to the merits of an art style all on its own… Nintendo doesn’t really appear to care all that much. It’s not news that every Zelda game — barring Twilight Princess — was developed with its gameplay in mind first, so really, it logically follows that the style of the visuals was never one of Nintendo’s big priorities. The gameplay is the big priority, and Nintendo makes stylistic choices as they suit the gameplay. For the most part, anyway.

So it’s kinda funny that everyone debates about all these styles, and that it can be one of the biggest topics within the fan community, when ultimately it’s probably the farthest from Nintendo’s minds. Certainly they’ve favored certain styles, and I’m sure how the style works with the gameplay isn’t the only thing on their minds when deciding on a game’s visuals, but it’s still clear that gameplay is their number one priority. Of course the fact that it’s so debated only makes sense: By virtue of the fact that Nintendo doesn’t care, they keep changing the style. And it’s because they keep changing the style that there can even be such a big debate among fans about it; other series don’t have this debate because they have more consistent visual styles across the series.

So what is my point in saying all this?

There really isn’t one, to be honest. It’s just an observation, me pointing out a bit of irony. Irony is fun! I’m certainly not making fun of the situation or saying that discussing Zelda art styles is bad, because I’m just as involved in those discussions as other people are and I have my own ideas about what styles work best for Zelda. I just find it ironic that, in a series where art style is never a constant, where it’s ranked beneath other facets of the game by its developers… it’s one of the things that seems to matter the most to many fans.