The Evolution of the Stalfos 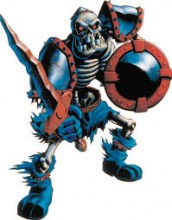 There are a variety of different enemies in the Zelda series that are constantly changing. But, some enemies have been in the series for almost all of the games and have changed dramatically between games. One of these enemies is the stalfos. I’m not going to lie, when I played my first Zelda game; this enemy killed me about ten times because it was so hard being a new Zelda player (Skyward Sword). But after doing more extensive research, I’ve realized that stalfos used to be a very common and easy enemy to beat. So what was this enemy like from the first to the most recent Zelda game? If you want to know, hit the jump.

Legend of Zelda
These are the easiest type of stalfos because although they have two swords they hold, they don’t really do anything and the only way to get harmed is to knock into them. They are also one of the most common enemies in this game, considering that they are in almost every dungeon. And, only a few sword slashes, usually one or two, will defeat this enemy. With only dealing ½ heart damage, this was a quick to defeat enemy that was very easy and common.

The Adventure of Link
This time, the stalfos has a shield, so you cannot attack it while standing still. They are a bit harder since they actually slash at you and you have to either jump and hit them or crouch and hit them. They are still a very common enemy found in dungeons and are still fairly easy to defeat. Plus, these can give you really valuable experience points (30). Now using 3-4 sword slashes and dealing ¾ heart damage, these are a bit tougher to defeat but still generally easy and very beneficial if you beat them.

This time, there are quite a few different forms of the stalfos. The colored stalfos do only ½ heart damage upon contact, are very common, and are generally easy. Blue stalfos are almost exactly like the original stalfos, except they jump away when you try to attack them. The grey stalfos will throw its head at you, but then fly away as if nothing happened. The red stalfos is the first to introduce bone throwing. They are exactly like blues except when they jump, they will then throw a bone at you. The yellow stalfos is exactly like the grey stalfos except a different color. The easiest way to defeat them is simply long range attacks or cornering them and slashing away. The other type of stalfos is the stalfos knight. This oversized stalfos will deal 2 hearts upon contact, but aren’t very common luckily. You better have bombs equipped for this boss battle. You can defeat in the following ways: hitting it a few times with your sword and them blowing it up with a bomb when its bones are crumbled, 16 sword slashes, 32 beam blade attacks, or 64 hits with the boomerang! Colored stalfos are generally easy and may even be easier than from The Adventure of Link, but the Stalfos knight can be extremely hard if you don’t have a bomb or you don’t know what you’re doing. This is where the stalfos starts to get hard.

Link’s Awakening
There are two different colors of stalfos this game contains, each dealing ½ heart upon contact an are both common. The green stalfos will attempt to jump on top of you and are vulnerable after a jump. They can be fairly simple as long as you back away when they jump and then immediately follow by a sword attack. The orange stalfos is completely different. This stalfos will instead jump away when you try to attack it and throw a bone at you. The key to this one is long range attacks. With two almost opposite stalfos, these are easy and are a quick to defeat enemy.

Ocarina of Time
This stalfos can get really annoying after a while. This enemy deals 1 heart damage with a regular sword slash and 2 heart damage with a jump attack, which can be hard to avoid. It really gets annoying when you have to face two at a time in the forest temple. But, with the deku nuts, these battles can be easy. This enemy is not common, only showing up in 3 dungeons (1 -3 in each), Ganon’s Castle, and the Gerudo training grounds. This enemy can be hard if you don’t know how to avoid its attacks

Oracle of Seasons/Oracle of Ages
These have the same exact characteristics as those from Link’s Awakening and are still fairly easy.

Wind Waker
These enemies are somewhat common and are extremely easy to defeat. They are also some of the largest stalfos to date, but don’t let it intimidate you. All you have to do is slash it a few times then hit it with a bomb. They deal little damage and are one of the easiest stalfos by far.

The Minish Cap
Similar to many others, there are a blue and white form of the stalfos, with them both jumping back and the red throws bones. With damaging very little, yet again, this enemy is fairly easy.

Twilight Princess
These enemies are very similar to that of Ocarina of Time in difficulty, but this time you have to use bombs to blow up their bones after they get hit by a few sword slashes. They do big damage, but can usually only be found in the Arbiter Grounds. Still, it isn’t necessarily hard, but it definitely stands out as one of the harder ones.

Phantom Hourglass/Spirit Tracks
This version of the stalfos will do the same as a lot of others: jump away and throw bones at you. There are also stalfos with hats and swords, but they are the same as always. These are easy Stalfos to defeat and only deal a little damage. 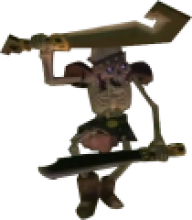 This Stalfos drives me crazy! It might be because I can never get my sword to swing at the right angle, but when I do, I can’t block its attack that it does right after. It is extremely hard when you have to face two at a time when you’re facing the hordes and when you have to face three when you’re collecting the sacred water from Skyview. I think that this boss is the hardest of the series technique wise. Plus, this stalfos does a lot of damage and can kill you multiple times if you go into the Skyview Temple unprepared for the first time.

Overall, the Stalfos is an enemy that is easy in some games and really difficult in others. Probably the easiest is from the original Legend of Zelda and the hardest is from Skyward Sword. So, from what game do you think the stalfos has been the easiest/hardest? What enemy should I analyze next (must be from almost all of the games with a max of 3-4 it’s not in)? Let me know in the comment section below.