Zelda Dungeon is back with a new entry in the “Definitive Ranking” series! Hosts Mases and Gooey take a deep dive into one of the most divisive games in the Zelda series: Tri Force Heroes! The 2015 multiplayer spinoff, developed by Nintendo and Grezzo, uses the same engine and art style as A Link Between Worlds. Tri Force Heroes also uses the same Energy Gauge that the 2013 game used. The spinoff is set in the Kingdom of Hytopia, which is obsessed with fashion and glamour. A player’s opinion on Tri Force Heroes will likely depend on a number of factors including their play habits. For example, did the player play the game alone (my sympathies if you did), did they play the game online, or did they play the game in person with two friends?

Mases and Gooey use an exhaustive list of categories to discuss each game including World, Art Style, Story, and much more. Because of how different Tri Force Heroes is from most other Zelda games, some of the elements are difficult to assess. For example, Tri Force Heroes is broken into stages and worlds, similar to a 2D Super Mario game, so the game does not have dungeons the same way a game like A Link To The Past does. Some of the highest ranked categories of Tri Force Heroes across the board were Art Style, Items, and Music/Sound, while the lowest ranked categories were World, Story, and Dungeons. There are some interesting music secrets in this game that are easy to miss. For example, if a player is using download play, they will hear 8-bit versions of the songs. Additionally, when players are in a totem, the music will have different instrumentation depending on what part of the totem they are in. 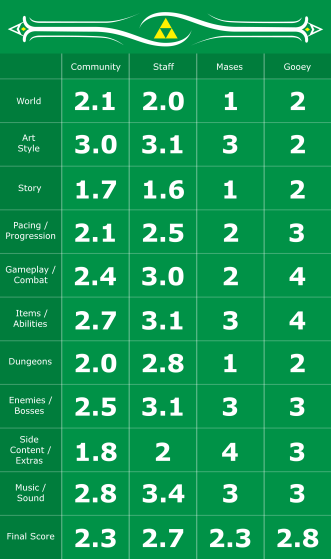 When looking at the final averaged rankings between the Community, Staff, Mases, and Gooey, everyone ended up being relatively close with their final scores; each final score averaged out to some type of 2. For the community, Tri Force Heroes is ranked just above Wand of Gamelon, which received a dreadful 2.2. For the staff and Mases, the game is ranked in the lower fourth of all total games. Overall, it is clear that it is difficult to compare games like Four Swords and Tri Force Heroes to other Zelda games because they are very different from most other games in the series.

If you want to want to watch past videos in the series, you can check out the full collection of “Definitive Ranking” on the Zelda Dungeon YouTube channel. 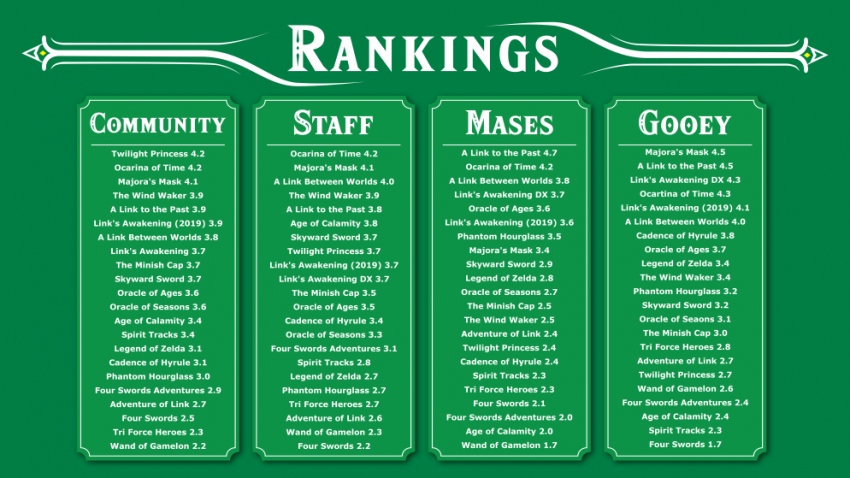 Do you agree with the placement of Tri Force Heroes in the rankings? What are your own thoughts on the multiplayer spinoff? Let us know your thoughts in the comments below!

Comments
Sorted Under: Games, Original Content, Ranking Zelda, Tri Force Heroes
Tagged With: No tags were found for this entry.