The Definitive Ranking of Phantom Hourglass

Following up on our Definitive Ranking of Skyward Sword, we are giving our thoughts on the swashbuckling adventure The Legend of Zelda: Phantom Hourglass. Hosts Mases and Gooey take us through their thoughts about the game, exploring everything from story, pacing and progression, right through to the game’s soundtrack and side content.

As tradition with previous episodes, we polled both the staff at Zelda Dungeon and the community at large for their opinions on the game, which you can view down below. 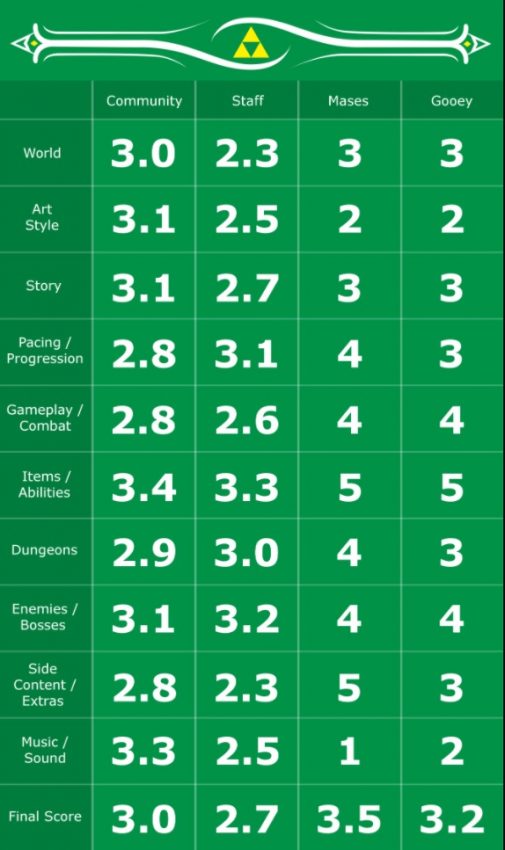 The community poll gave the lowest tied score to a Zelda game for gameplay / combat and side content / extras. This came as a shock to Mases and Gooey! Gooey appreciated how the full potential of the 3DS has been utilized, as making use of the map was a highlight and jotting down key locations and directions for weapons was useful. Mases felt Phantom Hourglass has the best use of the boomerang, bombchu, grappling hook, hammer, and fishing! And while Gooey felt the puzzles were not the most difficult, his navigation of the Temple of the Ocean King had some hairy moments!

Aside from a few categories, most of the staff poll was lower than the community poll. The most significant differences were scores for art style and music / sound. Mases and Gooey scored even lower! As a final score, Phantom Hourglass scored midrange in the 3’s, aside from the Zelda Dungeon staff which (as the pattern suggests) awarded a lower score. 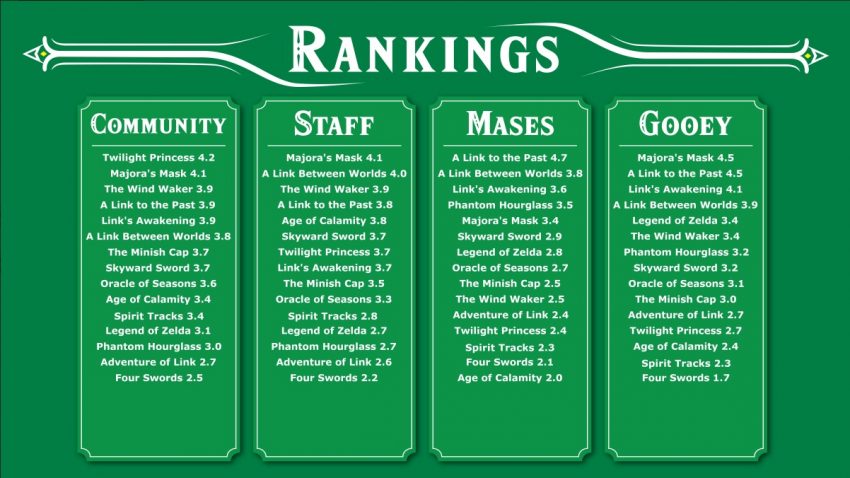 In the staff and community ranking, Phantom Hourglass finds itself near the bottom of the pile with the Adventure of Link and Four Swords. Mases is keen to defend Phantom Hourglass as it reaches number four in his list and Gooey calls a draw between Phantom Hourglass with Skyward Sword. Our hosts make comparisons between gamers’ love and hate for handheld Zelda titles and use of the stylus, so these attitudes could explain the overall public opinion.

What are your thoughts on The Legend of Zelda: Phantom Hourglasee Do you think this game deserves more love? Let us know in the comments below! And don’t forget to let us know what you loved or didn’t love by voting in April’s poll for our next games: Wand of Gamelon & Faces of Evil!

Comments
Sorted Under: Games, Original Content, Phantom Hourglass, Ranking Zelda, Slider
Tagged With: No tags were found for this entry.