Hello readers! Brian here with the tenth edition of “The Best and Worst of Zelda.” Last week we covered plenty of the series’ final bosses, but for completion’s sake, I thought it fitting to make this second post focusing on everything I left out! That’s right, every single final boss will be covered! Next week’s theme has already been determined, but feel free to write in your ideas for the future.

I’ve been known not to mention Four Swords in these editorials, but as the hope is to hit every boss in the series, I think it’s finally time to tackle these two games. Four Swords shows the inception of Vaati, a villain in only three games who I would personally love to see return in the future. He only appears in mage form, or rather, a giant ball of blackness with a humongous eye. His character is completely undeveloped, and the build-up is… I guess it’s the whole game. There isn’t really any other plot-line other than “Kill Vaati,” so that’s… decent I suppose. The music is the best track in the game, but its competition is extremely slim. The fight is generally very fun. It’s exciting, and it well utilizes the game’s multiple Links aspect. Killing Vaati in this game doesn’t feel at all satisfying, as the game fails in all means at introducing the villain’s character. The fight may be epic, but it feels almost meaningless.

Four Swords Adventures, on the other hand, pulls a bit of a bait and switch. It somewhat creates a character for Vaati, and delivers a phenomenal battle with the eye-crazy mage, but although this may be one of the best boss fights in the game, it isn’t the final one.No, that would be the fight with the gargantuan Ganon, as massive and frightening as ever. The boss simply looks exciting! But does the gameplay live up to the aesthetics? In a word, no. It’s boringly spammish, in that doing one attack over and over for about five minutes is an effective way to kill him. That isn’t how bosses should be! It’s too boring that way, and I guess it just failed to live up to my expectations.

Probably the most requested boss in last week’s comments section was the mysterious Majora. I really like the build-up to Majora more than anything. It’s extremely difficult to pull off a fantastic main villain that the character never actually sees until the final battle (although we see the mask), but Majora’s Mask figured it out. I see similar strategies used in later Zelda games, but I don’t believe they even compare to this startling, climactic ending. Majora is a very different kind of villain from Ocarina of Time‘s Ganondorf. That specific antagonist was really built to be absolutely despised through several encounters and explanations of his evil doings, he was a classically linear villain. Majora, alternatively, was shrouded in mystery, considering little about the strange being is ever made known. But what is made known is that it must die. The boss battle itself was very well constructed, being the first major multi-phase final boss fight in the series. Each phase was challenging, intriguing, and overall exciting. Given, it was a bit strange with the psychedelic colors and the high-pitched squeals of Majora’s Incarnation. The music isn’t something I’d listen to outside of the game, but there’s no denying that it fit the battle very well. Very little went wrong here. In fact, I would go as far as to say that Majora is the perfect example of a boss fight done correctly. 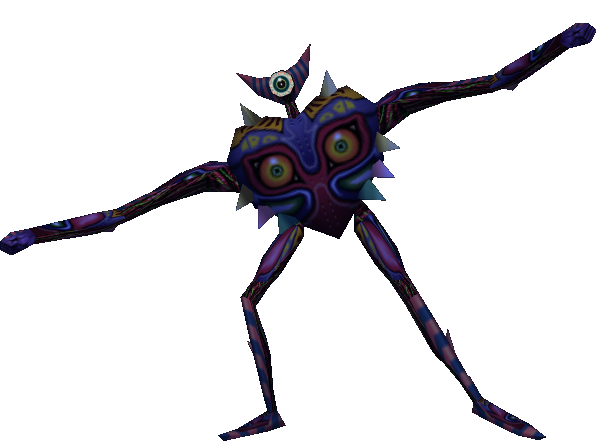 And I think the producers of Phantom Hourglass agreed. They seemed to attempt the emulation of a Majora-style build-up to the final boss Bellum. Did it work? Certainly not as well as it did in the past, but I guess it was interesting. The first piece of the battle when you merely had to fight the monster of Bellum did nothing for me, but the actual final battle against none other than your buddy Linebeck is the fight that I remember most. Allowing actual help from the generally useless fairy was a nice change of pace, and the dual-screen fighting is always a blast. The only issue I have with this fight is drawing the figure eights. How is one meant to do that? I really couldn’t figure it out! I kept doing spin attacks instead, and I felt like a massive idiot throughout the entire fight. Otherwise, it was decently done. Not amazing, but… good.

Likewise, I find the Spirit Tracks boss fights similarly uninspiring. Well, some of it at least. The first fight, the Demon Train, simply bored me. I didn’t find it at all difficult, and Puppet Zelda was even easier. I was relieved to find that at least Malladus was challenging, and extremely cool. Look at him, really, look at him! He’s awesome, really awesome! Quite like Bellum, this boss is never seen until the final fight, but through Chancellor Cole, hatred for this monster has really built up! It’s also fun to see the princess take some action in beating up this giant monster. The music is surprisingly up-beat for such a creepy battle, but I think it actually fits the game as a whole very well. It almost feels more like credits music than fight music. All in all, impressive battle with Malladus, but the preceding fights left much to be desired. 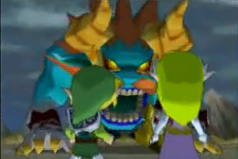 And lastly, but most certainly not least, is The Wind Waker. Playing through The Wind Waker HD this past weekend, I’ve come to the conclusion that Ganondorf in this game may just be my favorite video game villain of all time. He’s extremely dramatic, but never to a point where it becomes ridiculous, he’s absolutely odd in stature, and he’s nothing less than deplorable. But unlike in past games, Ganondorf has legitimate hopes, human dreams for his future, and you come along and turn him into a helpless pile of rock. He wasn’t the power-hungry, heartless monster he came off as in previous games; instead he was sincerely angry. Angry at the gods, angry at the Hero of Time, and most of all, angry at you. He’s very accessible, almost human in a sense, and this makes him far more powerful as a character. In terms of build-up, he simply can’t be beaten. You hate him straight from the moment you learn that he stole your little sister and sent your grandmother into a depressed, soup-making emotional breakdown. He goes on to attempt your murder at the Forsaken Fortress, and then of course there is that horrifying seen with Zelda in bed… All of this plus one of the more exciting dungeons in the series, requiring a total of 6 boss fights just to get to Ganondorf. And there begins the final battle. A gorgeous atmosphere; the destruction of Old Hyrule all around you as some amazing music blares in the background. A fitting ending, the sword duel to the death, with Zelda helping out the whole way, until that iconic final blow. How wonderful. It simply could not have been done any better than that. 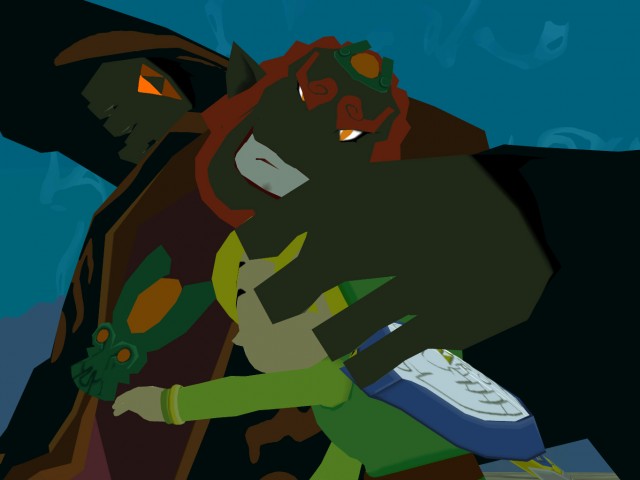 Well, that’s all for this week, but don’t forget to check back every Tuesday at 11:00 AM Central Time for more! Thanks for reading, as always!