The Atmosphere, Darkness, and Emotion of Majora’s Mask 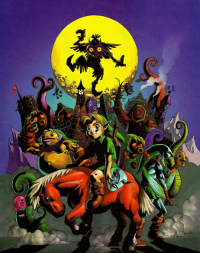 Majora’s Mask is a game often applauded for its atmosphere. People constantly talk about both that and how dark the game was. These two things tend to be prime topics when discussing MM’s uniqueness – those, and the emotion they spawn either intentionally or unintentionally. This article is about the atmosphere and darkness, but mostly about the emotion of the game.

The atmosphere of Majora’s Mask is definitely distinct in places. The sense of dread. The feel of the mysterious and bizarre. To liken Majora’s Mask to Alice in Wonderland wouldn’t be inappropriate, and indeed the similarity seems intentional since Link literally falls into the game’s own version of a rabbit hole to enter Termina. The game plays off a sense of a twisted mischief as the child-like Skull Kid preys upon the people of Termina, and there are more sinister undertones with the impending apocalypse, the truth about Majora’s Mask, and the many unexplained mysteries of the Ikana region. Mystery is a key theme of the game right down to its core, and that heavily affects its atmosphere, as well as the emotion. The atmosphere contributes to emotions like fear, wonder, and anticipation as we wait to see what’s going to happen next and uncover the mystery.

But is Majora’s Mask really handled that differently from other Zelda games when it comes down to the basics? Is its atmosphere really that unique? It definitely is in the story sequences, especially the introduction of the game and the times when you get to learn the backstory of Termina and its denizens. There’s nothing quite like it in the series. It has an fresh atmosphere that is as compelling as it is unsettling. However, with anything else in the game besides the story, I don’t think that this is true at all. The game begins with a distinct introduction and atmosphere, but once the introduction ends the game evens out as a fairly standard Zelda experience. Yes, there are quirks even in the base game-play that set it apart from the rest of the series – such as the 3 Day Cycle, the Transformation Masks, and the focus on sidequests – so it remains true that the game has a unique flavor. But to say Majora’s Mask has an amazing or unique atmosphere is a pretty large overstatement unless referring to the story elements. It was good, but it would have been interesting to see the atmosphere and originality displayed in the story events bleed out into the rest of the game more than it did. The atmosphere of Majora’s Mask still feels like that of a fairly standard Zelda game.

Now the bigger topic I want to tackle is the emotion of the game. This emerges from the atmosphere as well as the events within the story. Majora’s Mask is constantly lauded (or denounced) as a dark game, even as the darkest in the series. The game does have dark things happen in it. A consistent theme of the game, as mentioned above, is people being tortured by cruel “pranks” and fear of impending death. Dread and suffering could be said to be major themes in the atmosphere of Majora’s Mask. Again, though, these are presented effectively in the introduction and some key story moments, but other times they are given a standard Zelda execution, minimizing how dark they can truly feel. Like any Zelda game, Majora’s Mask constantly has an abundance of fun and comedy relief combined with adventuring, both of which diminish the game’s darkness-factor.

I’ve made it a big point in the past that Twilight Princess is a darker game than Majora’s Mask. While I do think that Twilight Princess neglected being lighthearted much more than Majora’s Mask did and is therefore darker, frankly, in a major way that depends on the person experiencing the game. Most people would look at the constant dread in Majora’s Mask and consider it the height of darkness. But that might not be the case depending on the person and how their emotions work. Take myself for example. To me bravery is not the opposite of fear, it’s confronting your fears; you can’t be brave if you’re not afraid. When I look at the dread of Majora’s Mask combined with the lightheartedness and adventure, I see bravery in the face of fear. I don’t think it matters how terrible the fear is in Majora’s Mask, because the acts of bravery, resilience and love by Link and the people of Termina overshadows – or should I say illuminates – the game’s darkness. Whereas a game like Twilight Princess, where I felt the themes were more about sadness and loss than fear and suffering, I find more dark because I consider sadness a legitimate opposite to happiness. But again, this is my emotional interpretation of both games and something that will differ greatly for someone else. 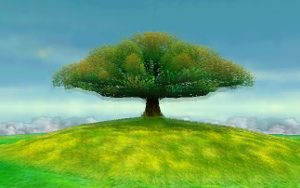 In Majora’s Mask, I feel the game was a lot more surreal than it was dark, although to be fair some may consider surreal things in themselves to be creepy. From the dream sequences that go along with the Song of Healing, to the odd characters like Tingle and places like Stone Tower Temple, and to the finale inside the moon, the game was very surreal. Since Link was in an alternate dimension where he saw strange versions of familiar faces, I’ve concluded that the entire game was supposed to feel like a dream, a place where your subconscious makes you see all kinds of things. The constantly used blurring effects strengthen this theory. Such a thing could be presented in a dark way or a light way, so perhaps it is a neutral aspect. Taking into account the deep meanings of some of the game’s surreal scenes, I do overall believe MM’s surreal qualities make it beautiful more than horrifying, especially since many of the scenes depict love and giving people peace.

When you examine everything on paper, Majora’s Mask seems to be a horribly dark experience, but when you take into account its execution it can even out more than you’d think. The same thing could be said about the uniqueness of its atmosphere. But the emotions received from both the game’s darkness and its atmosphere differ greatly from person to person, and I’m interested in knowing how this game made other people feel.