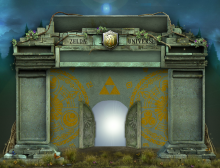 Our friends over at Zelda Universe have gone all out in creating a web-based treasure hunt full of riddles and puzzles all related to Zelda. Mum is the word on exactly what the prizes are, but they reveal that the prizes are worth over $500!

Beginning at “The Temple” (which bears a striking resemblance to their own website) players are expected to find their way inside and then choose one of our doors, each unlocked during a different week, which leads them to a new part of Hyrule full of dastardly puzzles to solve.

Rather than playing like a traditional Zelda game wherein you control a character and defeat monsters, this is a point-and-click web game expecting you to solve extremely tricky puzzles, unravel riddles, and even put on your Hylian Scholar cap and translate ancient Hylian languages.

If you think you have what it takes, head over to the first page of the game and prepare yourself for a month-long adventure!