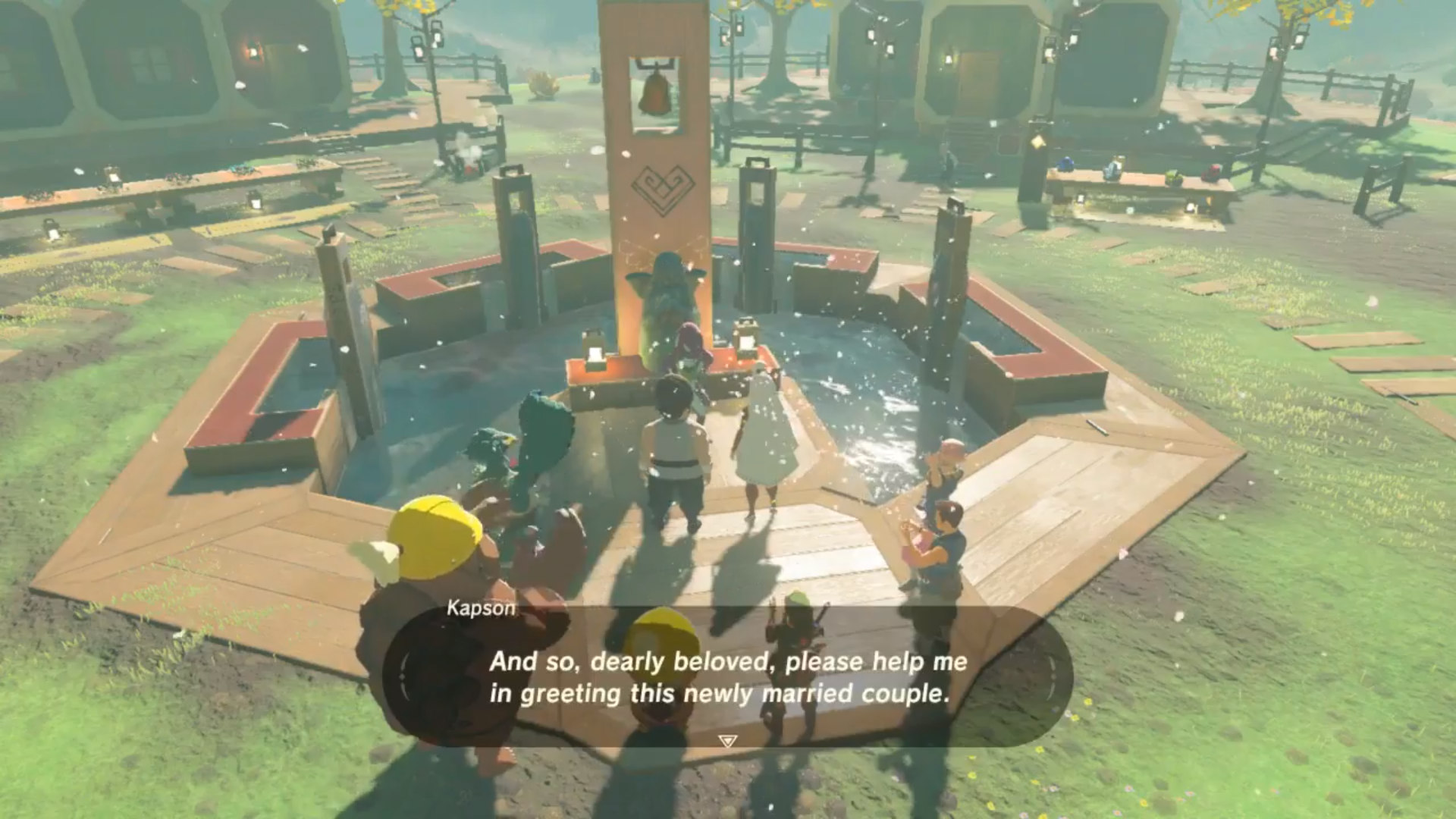 If 2020 has taught me anything, it is that video games are rarely, if ever, an accurate reflection of reality. In movies and video games, a single hero can save the world by themselves. In real life, positive change is often much more gradual. Bringing widespread positive change to the world can be a grueling process, even a heartbreaking process, that requires years of tireless work by hundreds of thousands of people who are invested in a cause. One of the great challenges of the world today is the need to acknowledge and learn from the past while also being willing to reach for something beyond the familiar to help form a better, fairer, and more diverse world.

When discussing the idea of diversity and empathy in the Zelda series, one of the locations/quests that came to mind is Tarrey Town. The quest to build Tarrey Town requires Link to seek out a wide group of individual from across the different races featured in Breath of the Wild. By showing the town grow with the addition of a diverse set of individuals and by depicting an interracial marriage at the quest’s conclusion, the Tarrey Town quest is one hint of the potential that the Zelda series has in depicting diversity and showing diversity’s precious value in both fiction and reality. In short, Tarrey Town is one small step in a journey towards building a more diverse and representative Hyrule.

Seeking Out Characters Who Look Different Than Link 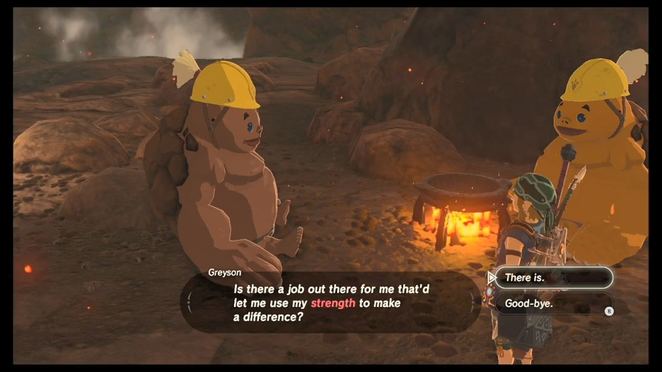 Link’s goal in the quest is to find individuals who can be a part of the burgeoning Tarrey Town, located by Lake Akkala. The method of finding these new inhabitants fits with some hilariously bad video game logic. Each character who is needed for the quest has the word “son” in their name. It is an inelegant concept, but this also makes it fairly easy to find the different characters required for the quest. If I could make a change to the quest, I would have liked there to be a more meaningful way to sort through or find the required characters. Perhaps the player would have to engage the characters in several layers of conversation before being able to convince them to be a part of the town (as seen in a game like Hades), rather than just being able to check character names to see if there are any “sons” around.

Significantly, each of the individuals Link recruits to Tarrey Town look different from Link and the Bolson Construction crew. In his quest, Link will recruit a Goron, Gerudo, Rito, and Zora to be a part of the town. Link must gather individuals from all over Hyrule to be a part of the growing town. While the developers could have chosen to have Link recruit villagers from other Hylian towns like Hateno and Kakariko village, the developers instead chose to have Link go further out into the wider world to the different races that are part of the game.

In short, the quest requires Link to bring a diverse group of people together. Each time a new member of the town arrives, they bring their talents and skills to the town. The games hints at the value of the diverse characters by adding an instrument to the musical theme each time someone joins the town. This is a very clever and subtle musical choice that works perfectly for the quest. Like the music, the town itself grows as its population does. Tarrey Town starts out as a barren patch of land and quickly develops into a diverse community with bustling markets and housing. Each character serves a role as a shopkeeper for Link and each shop includes different goods from across the kingdom, which is an obvious way to reward Link for each step of the quest. But in more subtle way, the quest builds a community in which all of the different Zelda races are together, rather than being segmented into their racial groups or local communities.

One Step Towards Reflecting Diversity In More Meaningful Ways 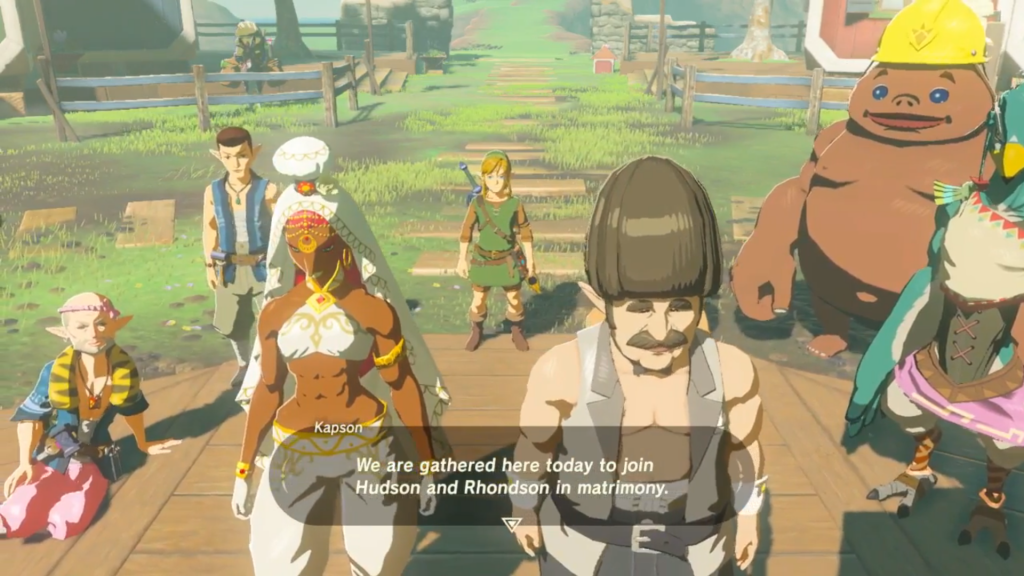 Like many stories in the Zelda series, Tarrey Town has a happy conclusion. The quest ends with a joyous wedding celebration between Rhondson and Hudson. Significantly, Nintendo depicts an interracial wedding, with a Gerudo and Hylian exchanging vows. This an event that I have not seen depicted in a video game before and wedding ceremonies are generally not something that are regularly depicted in video games. Overall, a wedding felt like a perfect way to conclude the Tarrey Town quest as weddings are often seen as events that mark the union of different groups and families. But going a step further, depicting interracial marriage helps show that diversity is an important part of the quest.

While Tarrey Town is a step toward reflecting diversity in a more meaningful way, the series still has a long way to go. Much of the diversity in Tarry Town is reflected in non-human characters. The Zelda series can do more to feature people of diverse backgrounds and more accurately reflect the global world that we live in. Fantasy and science fiction are limited only by our imagination and our own acceptance, so these two genres can be flagbearers in depicting more fully realized human diversity in terms of gender, race, class, and sexual identity. In the future, I would like to see the Zelda series feature a Hylian village/town that features prominent NPCs who have different skin tones and backgrounds. When looking at some of the communities I have had the good fortune to work in and be a part of, the Zelda series falls significantly short of reflecting the diverse backgrounds of individuals.

Overall,  the media landscape has been grappling with how to reflect authentic diversity in films, television, and games. Nintendo can have a role in a having a positive impact on its community and reflecting diversity in its games. Millions of people across the world will play the next Zelda game so Nintendo has a great opportunity to include a diverse set of characters in meaningful roles and reflect the diversity that is present in the world. My hope for the series is that the Nintendo can build off of the seeds planted in “Tarrey Town” and go even further in the next Zelda game.

A Quest About Building Rather Than Destroying 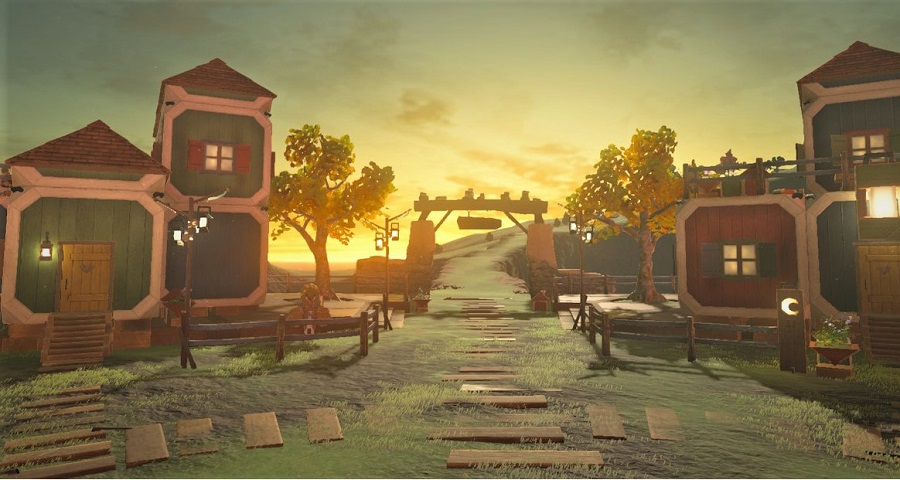 One of the aspects that drew me to Tarrey Town (the specific quest is called “From The Ground Up”), is that the quest is about building rather than destroying. Besides the various bundles of wood required for the quest (sorry trees), Link does not have to fight anyone during the quest. There is no Malice to remove, no Moblins to defeat, and no Guardian to trash. In a game that has a large focus on using powers and combat, it is significant that Link’s quest does not require any violence. While I love the combat of the game, giving the player a quest without combat was refreshing for me.

While Tarrey Town is a side quest, it feels like an important distillation of Breath of the Wild‘s most important ideas. In Breath of the Wild, Link and Hyrule are haunted by the horrific past that they have endured. There are physical scars like the ruins that dot the landscape, but also unseen emotional devastation that has lingered in the hearts and minds of the community who experienced and were born after the Calamity. The lingering effects of both world-shaping and individual tragedies are rarely spoken about in Breath of the Wild, but they are clearly present. This is also true in the real world, where the current and future generations will be shaped by the images and messages of the Black Lives Matter movement, the violence at the U.S. Capitol that was sadly seen across the world, and the joys and traumas of life amidst the COVID-19 pandemic.

Perhaps that is why Tarrey Town feels so special in Breath of the Wild. It is the only quest that allows the player to go beyond the ghosts of the past and build something new. In a world where the past has a stranglehold on everyone and everything, Tarrey Town is the birthplace of something new. By engaging in this quest, Link does not just fight the enemy who helped destroy the past kingdom; he help those who seek a new life. It is the one moment in the game that is truly poised towards the future rather than being trapped in the past. We need to work to make sure our world can do the same.

Sean Gadus is an Associate Editor at Zelda Dungeon. He loves playing video games, reading books, and geeking out about all things Star Wars and Batman. His first Zelda game was Ocarina of Time. He is currently smashing through the Underworld in Hades and re-watching Sherlock.

“Diversity in Zelda” is an ongoing series in which we highlight the series’ approach to inclusivity, spotlight relevant characters, and speak with Zelda fans from marginalized communities. It is our desire for the installments of this series to be received with open minds, and civil discussions between readers are encouraged.

Comments
Sorted Under: Breath of the Wild, Diversity in Zelda, Editorials, Editorials, Games, Original Content, Slider, The Legend of Zelda
Tagged With: No tags were found for this entry.