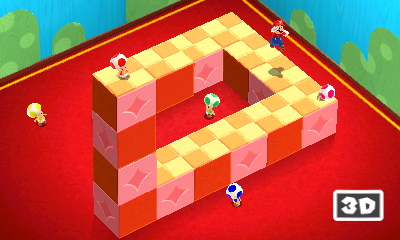 Super Mario 3D Land garners its integrity, as a handheld game, from its underlying structure. If you’ve played New Super Mario Bros., Super Mario Galaxy, or any of the later Super Mario titles for that matter, you’ll recognise that Super Mario 3D Land utilises a game design that you’ll instantly connect with, and yet, it’s a fresh approach for the series, and it’s something we haven’t entirely seen before. The structure works on a series of eight chunky worlds, which each have five or six bite-sized levels, plus a few smaller, nibble stages for some bonus 1-ups and power-ups.

Each of the “core” stages you’ll play through in each world look and feel something like you would’ve enjoyed in Super Mario Galaxy (except, not quite so spacey) – that is, you’ll have a good ol’ fashioned, free-roaming, platforming experience. The difference with Super Mario 3D Land is that these levels don’t have “missions” where you hunt for stars, but rather, you’re only expected to jump, roll, float, crouch, pound, flip, swing, swim, propeller, and cannon-ball your way to the end of the level, and the glorious flagpole – perhaps collecting the three optional, hidden star medals on your way there. Levels are “bite-sized” – and I don’t mean they’re stingy on content or land mass, no, not at all (some worlds are actually gargantuan in size). But they are meant to be completed in, roughly, say, a five-to-ten-minute run, or even less than that. As such, the main quest (as you journey to World 8) can be completed in approximately five to eight hours. 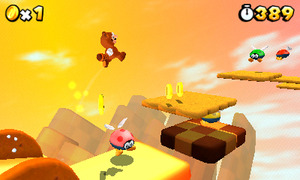 While this may sound unappetising, it’s a game design choice which works well for the Nintendo 3DS. These “bite-sized” levels encapsulate everything you could possibly want in a portable game while you’re waiting for your next lecture to start – each stage is packed to the brim with top-quality platforming, adventure, fresh, new gameplay ideas and collectibles – and it’s a dosage that you’ll be taking in a quick fix. Think of it like this: Super Mario 3D Land is a great game to play on your way to work, or school, and Skyward Sword is a brilliant game to play when you get home at the end of the day. It’s a game that achieves it’s design intentions and functionalities for its particular platform, and does so with considerable excellence.

And that’s why I love Super Mario 3D Land. It reminds me of how a handheld game can achieve certain goals that a console game simply cannot. Think of Super Mario Land, Angry Birds, Tetris, or Peggle – the sort of game that you can take time off to play, have a blast for a few minutes, and then go back to whatever it is you were doing. If you’re so inclined, you can also choose to stay put and tackle a few worlds for a couple hours, if you’re keen enough to keep playing. Both styles of play offer similar levels of enjoyment. What distinguishes Super Mario 3D Land from downloadable apps on your iPhone however, is that it is a wonderfully stylised and beautiful 3D Mario package, looking maybe not quite as good as Galaxy, but definitely as gorgeous as Super Mario Sunshine, with colourful texture work, spectacular lighting (the 3DS seems to pull off shininess really quite well), and fluid animation. In addition, it’s packed with hours of content once you’ve pushed through the main quest – did I mention there were an extra eight worlds of exceeding difficulty? Trust me, you might fly through the first eight worlds, but once you’ve passed the credits – well, let’s just say the game is only really beginning at that point. Oh, and you get to play as Luigi too. That’s always an added bonus. 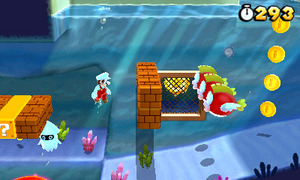 Super Mario 3D Land has also got plenty of charm – though some of you who played through Super Mario Bros. 3 on the NES might view it as “recycled” charm. I’m speaking of course of the notorious Tanooki leaf – the renowned power-up known for turning everyone’s favourite red-and-blue plumber into an air-gliding, tail-whippin’ raccoon (or some animal variant). Pretty much everything in the game gets a tail at some point – from Boos to Goombas, Bowser and even Bullet Bills, and it’s very flavoursome and undeniably cute. Don’t forget about Boomerang Mario and the Propeller Box either, both of which consistently offer new and fresh gameplay experiences as the game progresses.

What can be considered perhaps revolutionary for the Nintendo 3DS and in video games in general is the presence of 3D as a gameplay mechanic, rather than just a cosmetic flair. In case you haven’t been watching demo videos: you can actually use the 3D effect to judge the distance of platforms which may appear closer or further away, due to the given camera angle – for you art buffs out there, the game almost refers directly to the perspective-based artworks of M.C. Escher. It was only a matter of time before platform games delved into perspective-based platform navigation, and it works wonders in Super Mario 3D Land… trust Mario and Nintendo to pioneer such an innovative movement. It’s just a bit of a shame that the game hadn’t had more of these types of sections – they’re mostly restricted to bonus stages.

In fact, I was so pleased with my playthrough of Super Mario 3D Land, that I’m certain I’ll be playing through it again in the not-too-distant future. I’m not even so sure the game had any flaws. Definitely, the repetition of bosses was displeasing, and the reused Super Mario Bros. 3 charm had killed some of the uniqueness that the game could have garnered for itself if it had attempted to be its own thing. But this is platforming at its absolute pinnacle – Nintendo’s definitely got a handle on how to move Mario in a 3D space. Super Mario 3D Land represents perfectly Nintendo’s thorough knowledge of level design, the genre, and the handheld medium… the 3DS is not dead, or dying. Not only is Super Mario 3D Land the best the Nintendo 3DS has to offer, but it’s also an essential Mario game which no self-respecting Nintendo goer should dare to miss.

Did I mention World 5-2 is a Zelda-themed level, complete with a very familiar jingle? And the Tanooki suit is still the coolest Mario power-up of all time? Are you still not convinced you should buy this?