Posted on September 13 2009 by Nathanial Rumphol-Janc 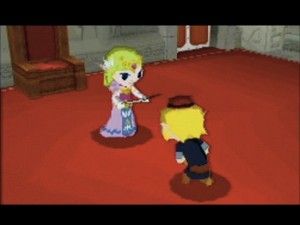 Sup ZI bros and girls. I just wanted to drop some possible new information regarding Spirit Tracks before I went out for the night. Earlier in the week, ZeldaPower reported that the upcoming Zelda title could possibly be seeing a release date of December 4th in the United Kingdom, meaning a likely release date sometime in November for the folks in the states. HMV—according to yami in #vgrc, a massive retail chain in the UK—has listed this as well. Now, ZeldaPower has also found what very well could be the finalized version of the game’s box art: the front, and the back.

Like just about every other thing we’ve heard about the game, this isn’t exactly all that exciting. We’ll keep you updated with any further information anyway, because that’s just how we kick it.