Skyward Sword Could get an E10+ Rating in North America 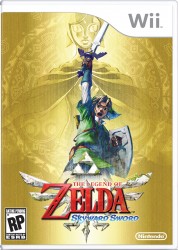 Our friends over at iZelda have done some research and believe that Skyward Sword could get an E10+ rating in North America. This would be the same exact rating that Ocarina of Time 3D got when it released here in the states last June. When the box artwork for the American version was revealed yesterday, it had the rating listed as RP, or Rating Pending.

However, this morning when we saw the European version announced, it also stated that the rating was pending, but had a tentative rating of ’12’. Europe uses the Pan European Game Information (PEGI) as its form of rating games while the US uses the ESRB. The ESRB doesn’t have a 12 rating, instead it has a 6-tier rating system. A game like Phantom Hourglass got a rating of ‘E’ for everyone. Ocarina of Time 3D got a rating of ‘E10+’ for everyone 10 and older. Twilight Princess on the other hand got a rating of of ‘T’ for teens aged 13 and older.

The PEGI rating system doesn’t have E, E10+, and T like the ESRB rating has. Instead, they have clear age ratings of 7+, 12+, and 16+. Ocarina of Time 3D got a PEGI rating of 12+ and an ESRB rating of E10+. However, Twilight Princess got a PEGI rating of 12+ as well but got an ESRB rating of T. Thus, we can pretty much conclude that Skyward Sword will have either a rating of E10+ or T. From what we’ve seen, my instinct is telling me that the game will likely have an E10+ rating as while it is focused around sword gameplay, I don’t see it as dark and violent as Twilight Princess. Not to say that Twilight Princess was a very violent game, but the graphical style made it seem like such. Skyward Sword’s water-color feel makes it appear a bit more cartoon looking and thus very kid-friendly. I think it will go down the road of Ocarina of Time 3D and have a E10+ rating.

Skyward Sword is set for release on November 18th in Europe and November 20th here in the United States.