Posted on December 11 2011 by Nathanial Rumphol-Janc 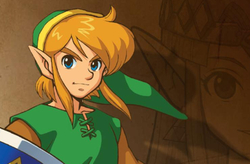 I could make so many puns about this interview related to The Legend of Zelda: A Link to the Past, but I shall refrain.

An old interview between Zelda creator Shigeru Miyamoto and Dragon Quest creator Yuji Horii from 1989 has recently surfaced online. In their talk, the two legends discuss A Link to the Past and Dragon Quest IV, both of which were still in development at the time.

I love these reading these old interviews. They really are windows to the past, a time when everything was new and nobody had any idea of what Zelda would live on to become.

The discussion starts out with Miyamoto asking Horii about Dragon Quest IV, which was nearing the end of development. For the most part, this part of the discussion just covers aspects of the game that anybody who’s played the game is aware of. It gets a little more interesting when Miyamoto starts asking if a certain gameplay/story mechanic would be included in the game, mainly because it makes me wonder if Miyamoto himself would ever try such a thing in one of his games:

M: And how do they behave during battles? Is there a character who will just run away whenever he feels like it, for example?

H: They won’t run away on you. There might be someone like that in the game, but your main battling force won’t make a run for it. If they did, it wouldn’t make for much of a story.

M: Does that mean the two supporting characters might run away? And if they do, they’ll be gone forever?

H: Nah, I don’t really want there to be anything in the game that can’t be undone. For example, if there was a character that ran away and never came back, I have a feeling you’d be left regretting whatever you did to make that happen. “Oh, man! I made a huge mistake and then I accidentally saved my game!” That’s not what I want. I think that, no matter what happens, you have to be allowed to undo it.

After that, the conversation shifts over to Horii asking Miyamoto about ‘Zelda 3,’ which, at the time, was still in early development.

M: Basically, I intend to make a return to Zelda 1′s style. This is something I’ve had in mind since even before we began making Zelda II: The Adventure of Link.

M: Ever since I started making the first game in the series, I’ve been saying that the third Zelda will feature a party, one that consists of the protagonist, who’s a mix between an elf and a fighter, a magic user, and a girl. The fairy that appeared in Adventure of Link was actually a party member designed for Zelda 3.

A girl who looked a little like a fairy and whose role consisted of reconnaissance. Like the characters in action games that don’t engage enemies in combat but rather go and scout out the surroundings and return to you safely. It’s also fun when action adventure games lets you choose who to send out. That’s the sort of thing I’m thinking I’d like to put in Zelda 3.

I’ve never been too particular about the story in the games I’ve made in conjunction with (Earthbound creator) Shigesato Itoi. The stories of Mario and Zelda titles have always been supplemental to the actual gameplay. Action games only have stories attached to make the experience more interesting. Itoi is the one that writes the story, and I just help out a bit.

Well, Link did get to walk around with Zelda at some points, but I wouldn’t call that a party. Then again, it does I guess back then it would seem like one. There are definitely see shadows of the concept in Link to the Past.

Overall, it’s really interesting how they were originally aiming more towards the type of RPG style that most are familiar with today, especially since, at the time, Miyamoto said that they were “more or less finished” with the game, and were just waiting for Dragon Quest to come out so they could have enough space afterwards so ‘Zelda 3’ wouldn’t get overshadowed. Of course, I could just be misinterpreting the translation.

H: How has it been, making your first RPG?

M: We started out developing it as an action game, primarily. We’ve been careful to maintain a high degree of originality, noting where we’ve copied something from another game, though not substantially, and where we’ve done something completely new. We’re proud of ourselves for developing the game structure.

The game structure of RPG titles is already more or less settled upon, and an RPG overworld is something anyone can make. But that’s all the more reason to ask yourself whether it’s good enough to use the same template as everyone else and simply expand the story on top of that. That’s where the challenge comes in. These days, there’s a gap between players who prefer a solid story to having new features and players who prefer having new features to a solid story.

H: That’s right, it’s difficult to balance the two. Do you think you’d like to continue making RPGs in the future?

M: I hope to make a new game structure for people who can write scenarios like Shigesato Itoi can. Current game structures are being improved through the combination of elements from different game genres.

I want to break away from that a bit. I think it would be ideal if I were able to create a game structure that represented a turning point, much like the Famicom RPGs of old, for example. But more importantly, Mr. Horii… won’t you consider developing for the Super Nintendo?

M: You really ought to give it a shot!

H: Hmm, maybe. I don’t really have too many ideas right now…

M: With the way things are now, you can’t really express yourself, right? The Super Nintendo makes it easy. These days, it’s far more straightforward to realize all the things you’ve wanted to do but haven’t been able to. Game development has gotten much easier, in more ways than one.

I wish Miyamoto had elaborated more on what he meant by “turning point.” Based on earlier bits of the interview, I don’t think he was talking about plot twists, even though those did become a series stable starting with A Link to the Past. No, I think Miyamoto was already shifting gears and thinking up ideas for what would eventually become Ocarina of Time.