Secrets of Skyward Sword: The Tribes of the Sky

Posted on April 22 2013 by Dathen Boccabella

What I love most about Skyward Sword is how it provides connections and answers for the whole Legend of Zelda series, but rarely in a direct way. Alone, Skyward Sword tells a complete story that needs nothing more. Connected to Ocarina of Time it provides a prelude that sets up the Royal Family and the Master Sword. Joined to the whole series, Skyward Sword has so much more to tell, or at least, to hint at.

Prior to Skyward Sword, the Zelda series had a history of placing civilizations up in the clouds. From the Oocca of Twilight Princess to the Wind Tribe of The Minish Cap, the sky has never been a barren place. With the incorporation of Skyloft in Skyward Sword, there are now more questions to ask about the tribes of the sky. Are they connected? Where did they come from? Thankfully, as well as raising the questions, Skyward Sword hints at the answers.

As a preliminary note, there is need to address the Picori (Minish) Tribe from The Minish Cap. While it is stated that they “appeared from the sky” in the game’s backstory, we know this description isn’t factual. The original Japanese asserts that “from the sky” should be read “as if from nowhere” – referring to their surprise appearance from the Minish World, accessed through the portal. With it established that the Picori are not a tribe of the sky, it is The Wind Tribe and the Oocaa which beg further examination.

The Wind Tribe appears in The Minish Cap, and is stated to have once lived in the Wind Ruins. However, at some point before the game they use their own magic and mastery of the wind to move their palace and civilization back into the sky. Skyward Sword informs us that at one point all humans lived in and around Skyloft. Therefore there is little issue in viewing the Wind Tribe as a group of people who originally came to the surface and went their own way.

Similarly to how some believe Groose to be the ancestors of the Gerudo, the Wind Tribe was just another settling of people from the sky. Although we are certain that The Wind Tribe was always loyal to the Royal Family, with King Gustaf being rather fond of the people. This leaves the question of why the Wind Tribe left for the skies.

If we consider the official chronology, where the Minish Cap follows Skyward Sword and the era of time between is referred to as the “sky era” we can develop an answer. The Wind Tribe, by whatever means, desired to return to the skies where their forefathers had lived. Unlike Princess Zelda and Link in Skyward Sword, The Wind Tribe chose the sky over the land below, and returned to where they considered home – to be one with the wind. However instead of necessarily returning to Skyloft, they made their home literally amongst the clouds, with their magic maintaining their Palace above.

It is always possible that some humans remained above the clouds when the original settlers came down to Hyrule in Skyward Sword, meaning that the Wind Tribe simply joined them, merged their palace with them, or even started a new settlement. Either way, this idea implies that during the era deemed the “sky era” transport between the surface and the clouds was not unusual.

There is actually one other mention in the Zelda series of a character that travelled between the surface and the skies. Twilight Princess’s Messenger to the Heavens does exactly that. It is known that he used the cannons to take messages between the Royal Family and the Oocca. The question, however, has always been why? Skyward Sword answers that, as we can presume contact was regularly made between the heavens and the surface as the citizens of Skyloft migrated into Hyrule.

But why couldn’t they just ride their Loftwings, who are seen in the land below at the conclusion of Skyward Sword? And where do the Oocca fit in? It is entirely possible that the Loftwings later become what are known as the Oocca, and the messenger to the heavens kept in contact. The connections between the Loftwings and Oocca actually go deeper than them both being birds residing above the clouds. 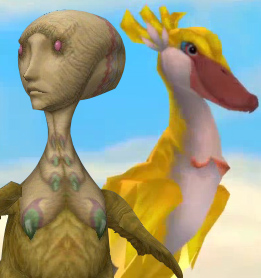 The Oocca are said to be a “race even closer to the gods” than the Hylians, and that fits the Loftwings as they are said to watch over Skyloft as Guardians of sorts. That would make them servants of the Gods to a certain degree. Twilight Princess’s themes, such as the destruction of their City in the Sky, suggest that the Oocca have declined in stature over time, so it fits.

Referring to the Oocca, Shad states that “some say these creatures made the Hylians”, however a closer examination of the original Japanese text reveals Nintendo of America’s mistranslation. The original script is actually discussing the land of Hyrule, not the people, when it refers to the Oocca being involved in the creation. That can be interpreted several ways. One possible conclusion is that the Oocca, or Loftwings as they were at that time, aided the Hylians in establishing the land below. They are even said to have aided in the building of the Temple of Time.

It’s hard to know the nature of these creatures, given that while the Oocca are little more than squawking little birds, some of them have mastered Hylian speech. Loftwings don’t demonstrate knowledge of speech, but we can’t assume some don’t have it. Nevertheless, I think of their involvement as more of merely aiding the people instead of getting terribly involved themselves. However, they do maintain a civilization of their own accord – be it a declining one – so are clearly intelligent beings.

While giving no solid evidence or connections, and definitely not explaining the mysterious Oocca, Skyward Sword gives us plenty to go by. The Wind Tribe likely returned to the clouds to live as their ancestors did, away from the troubles of the world. As for the Oocca, they are likely to be the degeneration of the Loftwings, given that their purpose as guardians is long since fulfilled.

Most clearly of all, Skyward Sword at least explains the need for the Messenger to the Heavens, as he communicated between those above – whether human or Oocca – and those below as the Kingdom of Hyrule was established during the time of the “sky era”. Of course there are inconsistencies and gaps in trying to connect all of the tribes of the skies to those in Skyloft. Yet that disjointedness is what makes the Legend of the Zelda what it is – where there are always hints at connections without the decisive evidence to prove them.