Secrets of Skyward Sword: The Legend of Zelda Redefined

Posted on April 26 2013 by Dathen Boccabella

(This article is part of classics month, which comes to a close on April 30th 2013. That being said, enjoy the read!)

Ironically, it was Zelda II: The Adventure of Link – the only game in the series lacking the title “The Legend of Zelda – which defined the very Legend. The myth which connected all of the Zelda titles together; not in the sense of an official chronology, but in the spirit of the series.

My previous article subscribed to the belief that “the legend of Zelda handed down in Hyrule” – as Impa puts it in Zelda II – was the tale told in The Adventure of Link’s backstory. The story told of a Prince whose heart was not in balance, preventing him from inheriting the whole Triforce from his father, The King. Inheriting it only in part, the Prince harassed his sister Zelda to tell him how to obtain the other parts.

The deceased King’s assistant, the magician, who now served the Prince, took things further than the Prince approved of, casting Zelda into an eternal sleep. Regretting the turn of events the Prince “ordered that every female child born into the royal household shall be given the name Zelda … so that this tragedy would not be forgotten.”

The main flaw for this being the legend that defined the series was how as more games were released, it become more and more unlikely that these events could have occurred at the beginning of the timeline. Nevertheless, with little else to answer the fan’s question, this was long assumed to be “The Legend of Zelda”, by both me in my article and the wider community.

However in 2011, with the release of Skyward Sword, all of this would change. When we all first heard of the appearance of a ‘sleeping Zelda’ in Skyward Sword, due to a text dump leak, many of us thought that the sleeping Zelda story as the ‘true legend’ would be vindicated. The downside of reading spoilers is the fact that you only get snippets; not the whole picture.

Once we’d played Skyward Sword it was revealed that the game didn’t end with Zelda asleep. The sleeping storyline served as a mere tribute to the classic Zelda II. Although Skyward Sword confirmed once and for all that the sleeping Zelda didn’t come first in the timeline, which was again confirmed by the official timeline, it did establish a new legend. The real ‘legend of Zelda’. 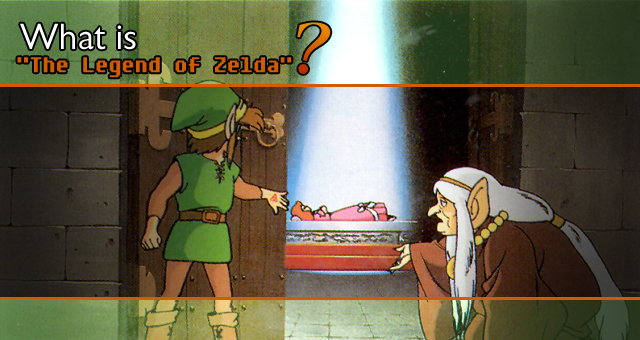 The story of Skyward Sword is “the Legend of Zelda”. It tells of Her Grace, the Goddess Hylia, and her sacrifice to save the world. How Hylia gave up her divinity to become a human (Zelda), allowing the Triforce to be used by humans, thus ensuring the eradication of Demise.

The true “Legend of Zelda” is the tale of Hylia’s descendants. The tale of those with the “blood of the Goddess” – forever bound to those with The Spirit of the Hero (Link), and those resultant from the hate of Demise’s curse (Ganon and Malladus). The “Legend of Zelda” is the tale of their struggles in the land of Hylia – Hyrule – and beyond. Whether each incarnation of Zelda is a mere descendant of Hylia’s bloodline, or a full reincarnation of Hylia as some theorize – Skyward Sword finally clarifies the true nature of the “legend”.

As Aonuma said in a semi-recent Nintendo Power interview (okay not that recent, roughly a year or so ago): “The deeds of the Goddess in the past marked the beginning of the Legend of Zelda, and the starting point of the destiny that was thereafter guided by the power of the three Great Goddesses”. Enough said.

With this redefining of the “legend”, so too must its applications be reassessed. For instance, The Wind Waker’s reference to Tetra being Zelda because of “the laws of the past” was assumed to be a reference, or a tribute, to Zelda II – despite the chronological issues. We now know better.

The reason that Tetra is immediately renamed as Zelda is because that identifies her not merely as the descendant of an ancient Royal Family, but as the final descendent of Hylia. Not to mention the rightful ruler of Hyrule as Hylia’s descendant. As Daphnes says: “You are the true heir of the royal family of Hyrule…the last link in the bloodline. You are Princess Zelda.” To put it in Aonuma’s words: “The Goddess and Zelda – who had always been fated to be the bearer of divine power – are one and the same. People have simply called them by different names.”

Skyward Sword has significantly changed the landscape of the Zelda series. What once was, is no longer. What once defined “the Legend of Zelda” has been replaced. No longer is the backstory that the whole series draws from a story of tragedy that occurred near the end of one branch of the timeline. Now the Legend is a story of sacrifice and redemption, a story of hope for the future that takes place first in the timeline. It only took 25 years, but now we know exactly what “The Legend of Zelda” truly is.

All added emphasis is mine.