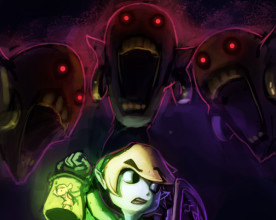 Many fans of the Zelda series will remember ReDeads as creepy reanimated corpses strewn across the damp and dark crypts of Hyrule. And while they may have caused many a nightmare among players young and old, there is controversy over whether or not ReDeads were ever actually human. YouTube channel SwankyBox decided to get to the bottom of the ReDead mystery by examining the ones that appear in Ocarina of Time and Majora’s Mask. Super Smash Bros. trophy descriptions and the fact that they lack humanlike faces point to clay altered by dark magic.
But information from the Garos and the Lake Scientist point to something much darker…

I hadn’t noticed that the Spooky Mask was made from the wood of a coffin, but that in connection with the veins visible in official art and the way ReDeads appear in Twilight Princess has got me absolutely sold on the corpse side of things. If you’d like to know more about SwankyBox, the channel posts Let’s Plays, Top 10’s, random skits, reviews, and other fun gaming videos. The Legend of Zelda has been mentioned before in its Six Nintendo 64 Mysteries and Top 10 Video Game Forest Songs videos.

What do you think– human corpse or clay doll? What did you think of this in-depth investigation of ReDeads? Are there any other anomalies in Zelda you’d like SwankyBox to explore? Let us know in the comments!