Pride in Zelda: The Non-Binary Nature of Link and An Argument Against Linkle 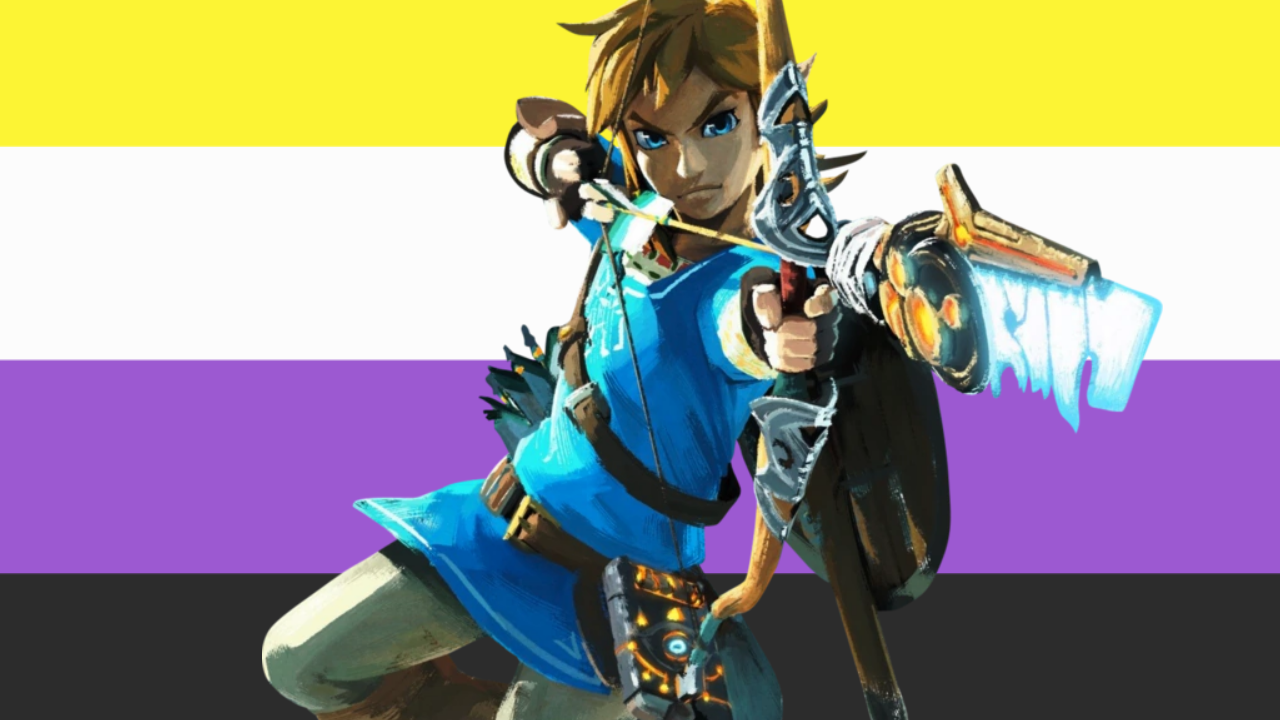 Video games and even computers have always had a fascinating relationship with the gender binary. In the very early days of the gaming, when names like Atari and Coleco Vision dominated the market, video games were largely viewed as a gender neutral past time. Over in computer development, some of the earliest prolific programmers were often women and some were even as bold as to assert computer development was a woman’s field at the time. The change to this idea came when a rather familiar game developer was forced to make a decision in the wake of the Video Game Crash of 1983.

A Brief History Lesson in Culture

In developing it’s Famicom video game system, Nintendo made the bold decision to rebrand video games as toys instead of computers. However, this rebranding meant a decision needed to be made. Toy aisles at the time were split between boys and girls and one could only put a product in one or the other. Nintendo went with the decision to put the original Nintendo Entertainment System into the boy’s aisle, and with that, a precedence was set that would last for years. The idea that video games were for boys is a concept that is still strong even today, despite most surveys stating that females make up nearly 45% of “frequent play” gamers and 30% of the audience for video game channels on YouTube.

So why the history lesson? Well, for one I just feel like people should know about that fact stated above, but most of all, I would like to talk about an interesting concept called representation. At this point, a large number of people generally view video games with the same degree of cultural value as books, movies, stage plays, and art. As art, video games inherently are a form of culture and like many other kinds of culture, reflect where we as humans are at a given time in history. Our ideals, our beliefs, our interests, and our priorities as a species all are reflected in what we choose to develop video games about. It doesn’t take a genius to tell that open world games are all the rage right now with titles like The Elder Scrolls: Skyrim, Horizon Zero Dawn, and of course, The Legend of Zelda: Breath of the Wild dominating the public consciousness.

But what about people? What about struggles and more political machinations gripping the world? While many would like to see video games as an inherently neutral zone in a highly polarized era of culture, the reality is simply that they’re not. Our games reflect the world whether we like it or not. Some are more subtle about it certainly, and some may take a couple years before those biases become evident, but we as humans cannot help but subconsciously inject our beliefs into what we create. If you were writing a book, you wouldn’t make your protagonist do something you find reprehensible and then continue to let people view them as a paragon, would you?

This bring us all the way back to the ‘games are for boys’ story from earlier and finally to how this all ties in to Zelda. I know, it’s been a lot of not-Zelda talk for an article on a website called Zelda Dungeon. You see, as early as the N64 era, developers were starting to pick up on the fact that games weren’t just popular among radical boys with reversed baseball caps and sleeveless denim jackets. Some tried to cater to this shift with releasing more feminine games like the millions of shovelware games based on Barbie, but Eiji Aonuma had a little bit different of an idea to handle this change.

Not many people are aware of it, but way back in 2016. Aonuma was interviewed by TIME Magazine in anticipation of the release of Breath of the Wild. One of the questions he was asked was whether the game would offer an option to play as a female character; something like the original character Linkle that was designed by Koei Tecmo for Hyrule Warriors. He pointedly said no to this idea and offered a perhaps “accidentally” progressive response to the idea.

“Back during the Ocarina of Time days, I wanted Link to be gender neutral. I wanted the player to think ‘Maybe Link is a boy or a girl.’ If you saw Link as a guy, he’d have more of a feminine touch. Or vice versa, if you related to Link as a girl, it was with more of a masculine aspect. I really wanted the designer to encompass more of a gender-neutral figure. So I’ve always thought that for either female or male players, I wanted them to be able to relate to Link.”

He mentions within the same interview that the team went back to a more masculine approach when it came to The Legend of Zelda: Twilight Princess, but that the same gender-neutral idea returned when the team went into developing Breath of the Wild. That’s not hard to see either, as it reflects within the game quite possibly more than any other Zelda title with how Link manages to successfully pass himself off as a Gerudo with just a costume change.

This isn’t the only time Aonuma has talked about Link’s gender either. In a more pointed question about whether Linkle would appear within a mainline Zelda title, Aonuma offered a very similar answer, pointing out that including Linkle would inherently cement Link as a male character. With such a pointed argument and denial, it’s incredibly hard to actually view Link as a male in a lot of regards looking at all this. By all accounts, Link very much seems to fall into the idea of a non-binary gender, and it seems Aonuma was pressing this idea long before the idea of non-binary representation was ever on the public consciousness.

This actually makes for a very odd counter to the idea that Linkle should be included in the series in order to provide more female representation. Given Aonuma’s argument, one might even actually hazard to say that not incorporating Linkle is actually the far more progressive idea. Establishing Linkle as an alternative would inherently take away Link’s non-binary nature and enforce Link as “the male option”, an idea that many more politically charged games like Cyberpunk 2077 are trying to move away from.

The Bottom Line: Nintendo is Not Apolitical

Really though, it’s not entirely that surprising given everything. Just recently, both Animal Crossing: New Horizons and Splatoon 3 made the “bold” choice to eschew gender-based character creator options and opt for a more non-binary approach to gender. Even all the way back in 1987, Nintendo made strides in revealing Samus Aran as a female underneath her bulky Varia armor. Shigesato Itoi, developer of the Mother series, is a notorious anti-war advocate and opponent to the idea of capitalism and loaded Mother 3 with his rather progressive ideologies. Nintendo is no stranger to progressive approaches to games, and the idea that they’re apolitical is absolute bologna to anyone who actually decides to pay attention.

If anything, that’s why I continue to respect Nintendo in a lot of ways. It’s easy to make a controversial game rated M that overtly states the moral idea you’re trying to illustrate, but it takes far more effort to work those in as just natural elements no one really questions. Many people mistakenly believe Nintendo to be apolitical because their ideas are just so subtle and natural and they generally avoid the more bold concepts, but the reality though is like I said, we can’t help but leave our ideals on everything we touch. We’re vocal creatures us humans and that’s kind of what I love about us.

Why don’t you get vocal and tell us your thoughts? Do you see Link as a non-binary character like Aonuma does? Do you still want Linkle anyway? What kind of representation do you want to see in the future of Zelda? Let us know in the comments below!

“Diversity in Zelda” is an ongoing series in which we highlight the Legend of Zelda’s approaches to inclusivity, spotlight relevant characters, and speak with fans from marginalized communities. It is our desire that the series’ installments be received with open minds and expose readers to new perspectives.

Emi Curtis is an associate editor with Zelda Dungeon. She is a freelance artist, programmer, and streamer with maybe a bit of an addiction to video games. She can frequently be found playing RPGs and Adventure games, her favorite of which being The Wind Waker. Currently, She is in the midst of writing a Breath of the Wild tabletop rulebook and playing Code Vein, Paper Mario, and A Hat in Time on stream. She can be found on Twitter and Twitch as their VTuber alter-ego Bianca Duba, playing classic games good, bad, and weird alike.

Comments
Sorted Under: Breath of the Wild, Diversity in Zelda, Editorials, Editorials, Games, Hyrule Warriors, Ocarina of Time, Original Content, Slider, The Legend of Zelda
Tagged With: No tags were found for this entry.