Pride in Zelda: The Importance of Chosen Families 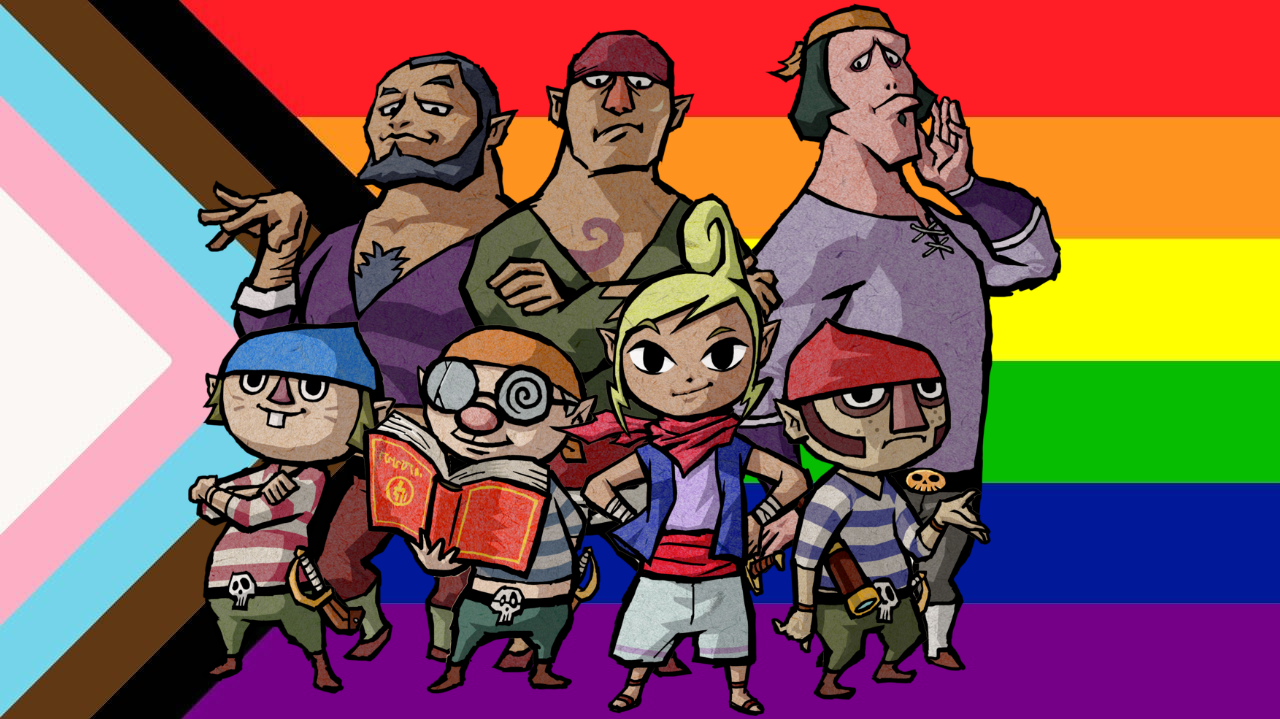 Chosen families are crucial to anyone who feels ostracized or in need of support that blood relatives can’t or won’t supply. But they are particularly important to members of the LGBTQ+ community who continue to face both social isolation and even expulsion from their homes. While the Zelda series does not contain much in the way of positive queer representation, it does feature quite a few examples of the value of chosen families. Not only do these portrayals serve to normalize the concept of a chosen family and provide an avenue for queer people to identify more closely with characters who are not explicitly LGBT, but the series itself created a chosen family of sorts that is no doubt near and dear to many of us: the Zelda community.

One of the first chosen families in Zelda that came to mind for me was the Bomber Secret Society of Justice. We don’t know too much about their home lives, but it’s clear they are a tight group of friends who work well together. I view the Society like an after-school club, and extracurriculars certainly provide community, a save haven, and an avenue for self-expression for LGBTQ+ youth. But not all chosen families are created equal.

Related to the Bombers, Skull Kid, Tatl, and Tael are their own ragtag chosen family. Skull Kid was originally friends with the Four Giants until they all left to protect their respective corners of Termina by lying dormant. No doubt Skull Kid considered the Giants his family and it’s clear the parting took a major toll on his mental health as it was only then that he started acting out. He tried to join the Bomber Secret Society but they kicked him out, and then he met Tatl and Tael. They had a day of mischief and fun before Skull Kid took things too far.

It’s hard to watch Skull Kid essentially sabotage his chances at a new family, but it’s clear he never recovered from the Giants abandoning him. Skull Kid reflects the sometimes long road to “belonging” for LGBTQ+ people who face rejection from not just their families but perhaps their local or national communities. Skull Kid needed patient, wise peers he could be open with so that he would be met with understanding instead of ire. If he had, there’s a chance he might’ve learned some healthier coping mechanisms and prevented Termina’s near-destruction.

My favorite instances of chosen families in Zelda are Batreax with Kukiel and Tetra with her pirate crew.

Everyone in Skyloft is fearful of Batreaux except for a sweet kid who doesn’t know prejudice. Kukiel’s affection for “Uncle Bats” sends a nice message about being open minded and not judging others by their appearance, but it doesn’t quite stick the landing. Batreaux is not accepted by the others on Skyloft for who he is, instead he changes to fit their standards. Re-inventing oneself isn’t always a bad thing, though. And if Batreaux always felt he was more human than demon, then I’m happy he was able to make that switch.

Finally, Tetra! Tetra is an orphan who lost her mother at a young age, so her pirate crew is seemingly her only family now. They appear to a be a jolly, swashbuckling bunch who may give each other a hard time every so often, but there’s always love there. For Tetra in particular this chosen family must be incredibly fulfilling because living the pirate life means she’s following in her mother’s footsteps, and she is so completely accepted that she’s the respected leader of the crew. They are everything chosen family should be: a group of supportive people who identify with one another and are always there for each other no matter what their adventures may throw at them.

Link is also often an outcast, but even he finds family whether it be with Saria, Colin’s family, Zelda herself, or his companions. Link is meant to be easy to project onto, so it’s likely fair to say that most players are familiar with at least the occasional feeling of isolation. Thankfully, we’ll always have the Zelda community to lean on. We have a huge network of folks from across the globe who share in our love of these games, so we never have to feel alone. It is my hope that this community continue to grow and remain open, inclusive, and kind to all those who attempt with good intentions to join it. So this Pride Month, we at Zelda Dungeon want to let all the LGBTQIA+ readers out there know that you are welcome here.

“Diversity in Zelda” is an ongoing series in which we highlight the Legend of Zelda’s approaches to inclusivity, spotlight relevant characters, and speak with fans from marginalized communities. It is our desire that the series’ installments be received with open minds and expose readers to new perspectives.

Alexis S. Anderson is a Senior Editor at Zelda Dungeon. She is a Distinguished Scholar at the UCLA School of Law pursuing a career in corporate law. She spends her free time playing Switch, watching movies, and trying (but failing) to teach herself how to play the guitar.

Comments
Sorted Under: Diversity in Zelda, Majora's Mask, Original Content, Skyward Sword, The Wind Waker
Tagged With: No tags were found for this entry.