Piece of Heart: Marked for Greatness

Posted on February 06 2015 by Alexis Anderson 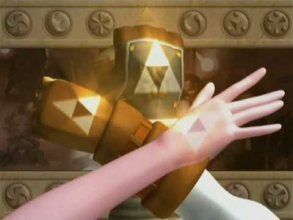 Welcome to the fifth installment of Piece of Heart, where we look at The Legend of Zelda series through the eyes of a literary professor and examine how its literary elements enhance the gaming experience. This weeks lesson is titled “Marked for Greatness” and we’ll be analyzing how distinctive markings, scars, deformities, and other oddities stand as indicators of a character’s importance.

One of the most obvious indicators would be the appearance of the triforce on a character’s hand, but any other quality that sets a character apart qualifies; If you’re a rare crimson Loftwing, the only male Gerudo, or a Kokiri missing a fairy then you’re marked for greatness, and I’ll tell you why that’s significant.

It’s easier to introduce characters without physical imperfections, so deliberate deformities must have important thematic, metaphoric, or spiritual meanings. In Majora’s Mask for instance, Kafei’s being turned into a child by Skull Kid reflects both the childish nature of Skull Kid and the fact that Kafei and Anju became engaged when they were young. It’s important because the type of curse correlated to Skull Kid’s being betrayed by the Four Giants whom he’d loved, and Anju was feeling this same betrayal. It also foreshadowed the appearance of the Moon Children who all ask Link questions concerning friendship, happiness, or one’s true nature. Heroes will always be marked in some visible way, whether the marking is there at the character’s introduction or it appears later on. The specific type of marking is always important– scars usually tell a character’s personal history, and twisted fingers indicate a twisted personality.

Let’s get the obvious out of the way first; when the triforce symbol appears on a character’s hand, it’s clear that they’ve got a major role to play in both that game and the prophecy of the hero across timelines. The appearance on Link only serves as proof that he is the reincarnation of the hero of legend and possesses the triforce of courage. But, in addition to assigning Link the task of protecting the triforce, this symbol also awakens in him the bravery and qualities of the hero of time. This mark can be a negative thing as well, as it exposed Zelda when she was both Sheik and Tetra; and it appearing on the one male Gerudo means marks him for evil because the triforce of power ends up consuming him. 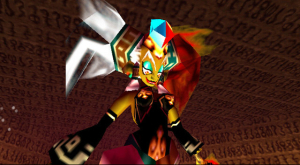 Speaking of the one male Gerudo, Ganondorf just so happens to take that role and is therefore destined to be the King of his people; Ganondorf’s focus on power left him discontent to rule only the Gerudo, but the triforce can’t take all of the blame. In Ocarina of Time Ganondorf’s surrogate mothers Kotake and Koume could have raise him on better ideals, but instead pampered him bolstering the idea that he was all-powerful. Kotake and Koume were marked, because they could transform into Twinrova, a single monstrosity of flame and ice. This is important because fire and ice cannot coexist as one entity; Kotake and Koume are the reason Ganondorf grew up to be two-faced and volatile, as he could never could be at peace with himself nor anyone else.

Link is chock-full of markings, so let’s rattle them off: he has a crimson loftwing, abnormal sleeping patterns, is a Kokiri without a fairy, a Kokiri who ages, and is blue eyed. In Skyward Sword a crimson colored loftwing is extremely rare, thus Link bonding with one gave him a divine air– and connected him with Hylia’s original hero. Link’s sleeping habits are a marking employed ironically, because he is characterized as a lazy boy, yet he puts all of his efforts into saving Hyrule. It can also be meant to show Link awakening as the hero when he throws off this sleepy personality. 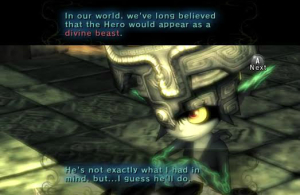 Ocarina of Time Link being different from the other Kokiri was mainly for character differentiation, it was a straightforward move to show that Link was special and set him apart as the Great Deku Tree’s chosen hero. The blue eyes are important in Twilight Princess, as the blue-eyed beast was prophesied by the Twili. Not only was Link the legendary hero of Hyrule, but also of the Twilight. Midna was tipped off by the beast form and those eyes. Being the jerk Midna was at the start of Twilight Princess she probably wouldn’t have helped Link out of that jail cell had he not clearly been destined to save her people.

While on the subject of Midna, some of our heroines are also marked. Midna was made an imp by Zant –an example of a marking occurring later in life– and the powers granted to the ruler of the Twili were taken from her. Scarred in such a way, Midna’s true form became a secret which added to the mystery of her character which was shrouded in twilight for much of the game.

Finally, Tetra was marked similarly to the blue eyed beast. She was young and had pointy ears, so Ganondorf was able to identify her. I know it was her resonating triforce that really gave her away, but if Ganondorf hadn’t been stealing pointy eared girls in Wind Waker then Aryll would have been fine and Tetra wouldn’t have had to aid Link at the Forsaken Fortress to begin with. Tetra’s deviation was a character history indicator, because she shared characteristics with the Princess; it also stood as foreshadowing. Like with Link’s sleep habits, this marking can additionally show the shift in attitude from the devil-may-care Tetra to the noble Princess Zelda.

Markings are a fairly easy, and I dare say fun, literary element to search for in basically everything. Harry Potter had a lightning bolt scar, Ellie from The Last of Us had her bite marks, in the Pokémon anime Ash Ketchum was the only kid to receive a Pikachu as a starter, even half of Harvey Dent was marked for evil later in his life. The markings are always indicators that a character will have an important role in the future, and it is after that role is discovered that the significance of the type of mark can be examined. Keep your eyes peeled for special scars in video games, literature, and other forms of media.

What did you think of this week’s lesson? Will you be on the look out for other distinctive markings on your favorite heroes and villains? Are there any other Zelda characters whom you believe were marked for greatness? Let your thoughts loose, and as always feel free to provide your own analyses, in the comments below!