Piece of Heart: It’s Greek to Me

Posted on January 23 2015 by Alexis Anderson

Welcome to the fourth installment of Piece of Heart, where we look at The Legend of Zelda series through the eyes of a literary professor and examine how its literary elements enhance the gaming experience. This week’s lesson is titled “It’s Greek to Me” so we’ll be analyzing how the influence of Greek myths add depth and resonance to Zelda’s legend.

It’s shocking the amount of Greek influence in the Zelda series; from temples, to goddesses, to greedy men turned to gold! And Link is a regular Heracles to be sure.

The purpose of a myth is to help explain humanity in a way that regular education cannot; and because they are so deeply set in the minds of most people, myths tend to shape peoples’ perceptions of the world. We’ll be talking about Greek myths specifically, though there are many different types of myths appearing in different cultures– I suppose the prophecy of the hero would be a Hylian myth. Greek myths are so often found in literature because they are the most recognizable. Their purpose can be to incite pathos, add resonance to a situation through mythical connections, turn simple actions into meaningful parallels, or more clearly show the nature of a character’s struggle.

For instance, Jovani in Twilight Princess is an obvious reference to King Midas who wished for the ability to turn anything he touched into gold. It’s easy to see that Jovani’s struggle was with greed, but the reference makes the exchange with Jovani all the more meaningful for those who know the pains Midas suffered under his gold touch, and thus associate them with Jovani. Midas could not eat, for his food turned to gold, and he had even turned his own daughter to gold. Jovani could not move, and his cat was turned to gold. The familial and physical woes of the two resonate to make Jovani’s story more compelling and personal.

As mentioned, the whole religious situation in Zelda– the worship of goddesses –is reminiscent of Greek mythology. Particularly, the fact that the three goddesses live in a realm apart from the mortals they created. The sacred realm is to the golden goddesses what Mount Olympus is to the greek gods: a divine place of dwelling. This parallel gives a greater sense of the power that the goddesses actually possess despite their never directly influencing gameplay, as it seemed Greek gods’ powers were almost limitless. 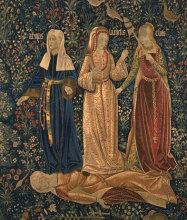 Interestingly enough, Greek mythology actually has a trio of Goddesses referred to as the Fates. In some depictions they influenced peoples’ lives by being present at the birth of every child and assigning its destiny right then. The epic poet Homer would sometimes refer to them as a single force, just as the Triforce could be considered a single representation of the Goddesses or they be grouped together under the Goddess Hylia. This reference again serves to show the Goddesses’ power, as the Fates governed how long one should live, this would especially make taking control of that power through the use of the Triforce very dangerous in the wrong hands.

Heracles is the Greek name for Hercules, and most people think of Hercules as this strong heroic figure, but he was also ill-tempered and kind of an idiot. Nevertheless, Link is a nice fit for Heracles. Link isn’t dumb, but the connection still makes sense because the general population’s idea of the myth would be the one most implicated. One thing I will say, Heracles lacked wisdom and Link wasn’t the one carrying the Triforce of wisdom, so there’s a reference. Heracles was the strongest mortal who even surpassed some Gods and Link was the chosen hero strong enough to vanquish even the most powerful evils. In addition, Heracles was a loyal friend with a strong sense of justice who often showed patience, fortitude, and endurance during his labors; that screams Link. The connection helps a player see Link as something divine and gives some insight into his character, rather than him being a one-dimensional hero cliche.

Honestly, Link could likely pass for any Greek hero if one tried hard enough to make the connection, so I tried to think outside the box. I found that Groose from Skyward Sword reminds me of the hero Meleager from the Argonauts’ battle in Hades. Meleager is the only Argonaut to stay and fight with Heracles against Cerberus. I was reminded of the battles with the Imprisoned when Groose was fighting the epitome of evil fearlessly alongside Link using the Groosenator. If Groose’s actions weren’t enough to convey the change in his heart, then this Greek allusion would elevte him to hero status instead.

These references are probably just references and not a deliberate attempt to add resonance to the game, but knowing that there’s a potential for resonance will help players develop an even greater love for this spellbinding series even if their newfound connections are far-fetched. Greek references or so naturally made that they don’t alwayshave to be purposeful, but there will always be plenty to look for. And the more myths you know of, the more connections can be made so take a crack at reading some famous Greek works! I’d suggest an abridged version of Homer’s The Odyssey.

That’s all for this installment, but keep your eyes peeled for Greek references in literature and video games. What do you think of the Greek myth allusions found in Zelda? Do you think finding all of these connections is interesting or enriching? Does it not really make a difference for you? Either way, express your thoughts in the comments, and share some of your own analyses there too!