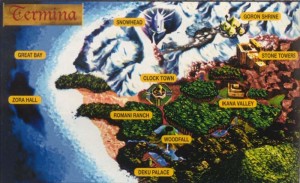 Welcome to the tenth installment of Piece of Heart, where we look at The Legend of Zelda series through the eyes of a literary professor and examine how its literary elements enhance the gaming experience. This week’s lesson is titled “Geography Matters…” The gist of it is that certain environments breed certain types of people– culturally, psychologically, financially, historically, and otherwise. Aside from general settings, specific geographical monuments also have significance.

The effect of geography is easy to see in the Zelda series, one simply has to look at the different races that have developed throughout Hyrule. And hey, if it hadn’t been for the odd customs of the Gerudo Tribe, the Prince of Darkness may not have turned out so dark.

As alluded to, geography is not only a setting– it’s also a history of interactions and cultural trends. When the geography is set in a certain text, the characters there act in a way that is only applicable to that area; this is how setting develops character. Additionally, a character’s migration from a barren desert to a lush garden can show a transformation in that character to, say, a healthier more meaningful existence. As a rule, areas considered “in the south” are typically places for characters to romp or cause trouble. And climate of course has an affect on the psychologies of an area’s inhabitants. 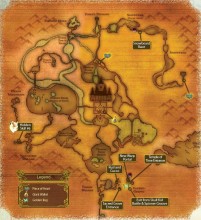 One quick thing I’d like to mention, in both Twilight Princess and Wind Waker, Link’s hometown is located in the southernmost part of the map. This makes sense with the idea that people in the south are free to go wild, as Link spends his carefree youth in these places. Though we don’t get much insight into what Link does as a child, it’s a pretty clear shift from freedom to crushing responsibility once he leaves home. Additionally, Ordon Province is an area ripe with chaos. It’s definitely a jungle; Link romps as a child, he chases down monkeys in the Forest Temple, and then plays a game with the Skull Kid in the Sacred Grove– definitely sounds like the literary south.

I gushed over Marin and Prince Ralis enough in the last installment, so I’m going to forgo talking about the geography of Koholint and Dragon Roost. I would like to look at, however, the differences in upbringing between Ganondorf with the Gerudo Tribe in Ocarina of Time and Vaati with the Picori Tribe in Minish Cap. Although the two eventually lead similar lives– using powerful dark magic to acquire unholy amounts of power and ultimately be defeated by their own arrogance– they grew up in drastically different environments.

In Gerudo, only one male child is born every hundred years, and that child is destined to be King. Therefore Ganondorf was coddled and pampered and catered to throughout his life. However, the Gerudo dwelled in a dry and barren desert; because of this all of the tribe members are coarse and easily agitated. You can chalk this up to 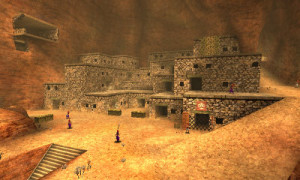 years of isolation from typical Hylian-life, and it’s this isolation and lack of human understanding granted by years of living in the desert that are partly responsible for Ganondorf’s lack of morals.

Vaati on the other hand lived in a bustling and friendly society of Picori (Minish) in a lush forest. He was trained in the art of magic by Ezlo who as far as we know wasn’t a ruthful master; a little snippy at times, but he had a good heart. By contrast Ganondorf was trained by Kotake and Koume who were rather rude and corrupt women from the beginning. Despite Vaati’s home being a lively forest, isolation remains a recurring theme. The Picori are about the size of a child’s thumb, so they can’t interact with the human world and each Minish community is generally isolated from the others (hence the categories of Minish: Town, Forest, Mountain). Vaati probably felt a sense of competition with his master, being the only other magic user in the village. He also likely felt unfulfilled in his small-town life, it’s not atypical at his age to want to rebel in such a way.

Now let’s examine the geography of Zora’s Domain, but rather than look at psychological effects, this time we’ll look at the symbolism of a change in climate. Zora’s Domain is characterized by its abundance of free-flowing 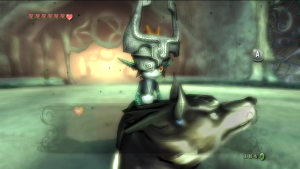 water, but in Twilight Princess the lake has been completely frozen. In literature, water usually represents purification or renewal while snow and ice are viewed as beautiful, but deadly. So normally this terrain is a pure place that provides life-sustaining water to the rest of the kingdom. But once it froze over, that water began to run dry (endangering Hylian lives) and Queen Rutela had been killed in a confrontation shortly before the climate shift. The Domain became a place of grief– but it was beautiful at the same time. The Zora were all frozen in a single instant; the soft glow of the sun outside of the domain made the ice shine, and its inhabitants were unable to feel the force of the devastation that had ensued. It wasn’t until the water flowed again that Prince Ralis took over, the very picture of hope and life because of his youth.

Finally, Kokiri Forest represents geography in culture at its finest, as the Kokiri maintain a certain set of customs due to their surrounding environment. The Great Deku Tree serves as their patron deity and much of Kokiri life revolves around the Great Deku Tree– he passes on the history of their race and protects them from the monsters in the surrounding forest. Additionally, the forest environment provides good reason for fairies to be commonplace, as woodland sprites are typical in old fairy tales. This part of the Kokiri culture is also very important to them, as Link is bullied for not having a fairy and then greatly congratulated once Navi joins him. Lastly, the geography of the dense forest surrounding the Kokiri settlement prohibits their leaving, as they’re warned that they’ll die if they try to; this being stuck in one place is expressed in the Kokiri’s growth being suspended in a childlike state. 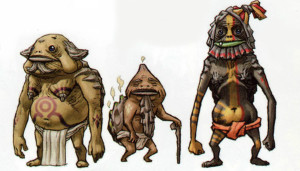 To avoid droning on, I won’t delve deeply into the other races and territories in Zelda. I will say that the Gorons, especially in Twilight Princess, fit the category of cultural geography with their patriarchs, elders, tribal tattoos, civilization inside of Death Mountain, and their dependence on Hot Spring water. The Twili fall under psychological effects of geography for the most part, and Zant experienced feelings of isolation and dissatisfaction much like Vaati had. Of course there are many groups of people I’m missing, but if I haven’t touched upon your favorite race then this is a great opportunity for you to examine its geography on your own!

Now you see why the setting of a story is so important; geography affects nearly every aspect of life in a given civilization. What did you think of this week’s lesson? Can you see real-world examples of the effect of geography on certain groups of people? Do you agree with the ideas presented here? Let your mind romp in the comments just south of here, and share your own analyses of geography in Zelda!