Piece of Heart: Flights of Fancy 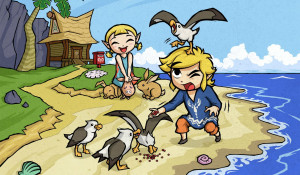 Welcome to the ninth installment of Piece of Heart, where we look at The Legend of Zelda series through the eyes of a literary professor and examine how its literary elements enhance the gaming experience. This week’s lesson is titled “Flights of Fancy”. This chapter could be wholly devoted to Skyward Sword since the name itself implies a departure from land, but instead we’ll examine literal, figurative, and ironic instances of flight that occur throughout the Zelda series.

The Legend of Zelda has a great variety of aerial crafts; from loftwings, to warp tunes, to cuccos, to canons, to carpets, to feathers, to broomsticks, and everything in between! And while the mode of flight is important, whether or not it’s a bumpy ride makes all the difference.

For the most part, flying represents freedom and escape. It can be freedom from a particular situation, or from general burdens that weigh people down. Aside from physically soaring through the air, people can “fly” metaphorically in which they are freed spiritually (their souls take wing) but do not actually leave the ground. The third literary use of flight is ironic use; the general idea of flight as liberating is exploited by being made to represent the exact opposite. Sometimes flying can isolate a person and sometimes the winged character is in a cage, the irony is this counter-freedom. Flights that are interrupted are generally ominous as that would inevitably lead to falling; surviving leads to rebirth and that person’s view of the world drastically changing, since falling from a great height normally kills the freefaller.

It would be a grave injustice not to mention the Rito tribe from Wind Waker in an article completely focused around flight, fortunately for the example of literal flight Prince Komali fits the bill. The young Prince has always been insecure and rather shy. His grandmother was the only one who could make him feel calm, but a short time before Link’s arrival at Dragon Roost Island Prince Komali’s grandmother passed away, leaving him worse off in his reclusivity. The boy was weighed down by insecurity and now by grief, as well as physically weighed down by Din’s Pearl of which he refused to let go. He didn’t even have the courage to ask Lord Valoo to grant him his wings. 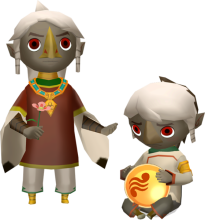 Link becomes an inspiration for Komali, as after learning that Link bravely defeated Ghoma and appeased Lord Valoo he is finally able to leave his room and ask Lord Valoo for the scale needed to obtain his wings. Komali does receive his wings and dons an entirely new set of clothes thereafter, indicating that he is a changed person. He stands with strong posture and even gains enough confidence to pursue Medli. As for why Link was Prince Komali’s liberator, Komali’s grandmother had been Valoo’s attendant, so it makes sense for Komali to trust the boy who was able to emulate his dear grandmother by calming the dragon. This is further supported by Komali giving Din’s Pearl to Link; Prince Komali was freed from his grief at that moment, even saying, “I want you to take this, Link! Giving you the thing I value most will give me the courage I need to stand up to bad things!”

In searching for a metaphorical style of flight, I came upon Marin from Link’s Awakening and absolutely fell in love with her character all over again. She epitomizes the spiritual freedom of metaphorical flight, and this realization adds yet another layer to her already multi-dimensional character. Marin longs to travel from Koholint Island, she is knowingly restricted by the island as well as unknowingly trapped inside the Wind Fish’s dream. The extent of her dissatisfaction with life on the lonely island is clear when she tells Link, “If I was a sea gull, I would fly as far as I could! I would fly to far away places and sing for many people! …If I wish to the Wind Fish, I wonder if my dream will come true…”

The most jarring part of Marin’s conviction to one day leave the island is that it isn’t physically possible as she and the island don’t even exist. She seems to come to this realization herself later in the game, and places her unsung hopes for freedom onto Link by wishing to the Wind Fish for his sake and asking him never to forget her, “Link , some day you will leave this island… I just know it in my heart… …Don’t ever forget me… If you do, I’ll never forgive you!” Link successfully escapes from the island, but destroys it and its inhabitants in the process. However, once again through Link, freedom is granted. Marin escapes from the island in spirit, kept alive in Link’s memories; you may even interpret this as her traveling along with him. The dream she was held prisoner in dissipates, and because Link now knows the Ballad of the Windfish, Marin is able to posthumously “sing for many people”. If the player completes Link’s Awakening without dying, Marin’s liberation is confirmed in the ending sequence; in the original game Marin is pictured with wings flying across the screen, and in the GB Color version her image comes on screen then disappears to reveal a seagull –the very animal she’d hoped to become, the one she’d chosen to represent her dreams of freedom.

Majora’s Mask was a good place to search for spiritual freedom because Link saved so many spirits with the Song of Healing, but instead Skull Kid stood out as an exemplary representation of ironic flight. The Skull Kid had 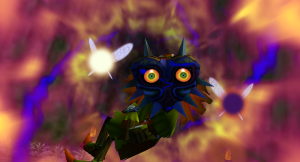 been deserted and exiled by his closest friends, his abandonment issues only lead him to commit further “pranks” on innocents like the Happy Mask Salesman and Link. Previously shackled by isolation, Skull Kid had finally found some friends when he’d met Tatl and Tael, but right around that time he met Majora’s mask as well. If you recall, Skull Kid was given the ability to float once he donned the mask, but doing so only pushed him deeper into his isolation and solidified everyone’s hatred of him. Ironically, being able to call out to the sky produced the opposite of the expected effect as Skull Kid lost the few friends he had recently gained, and lost control of his own actions entirely.

As mentioned before, this whole lesson could’ve been centered on Skyward Sword as every style of literary flight is presented in that game. Originally, I was going to talk about Zelda, but her change is obvious and I’ve talked about it before (she falls, but lives, and is reborn as the Goddess Hylia). So rather than be redundant, we’ll be examining our favorite anti-hero turned full-blown-hero, Groose! While he was always able to physically soar on the back of his Loftwing, Groose was still trapped in Skyloft. He was stuck having to maintain his bully attitude in order to keep the few friends he had, and was constantly locked in competition with Link. Clearly uncertain of his ability to be a successful knight, Groose acted like a pompous jerk as a defense mechanism. But as anyone who plays Skyward Sword finds out, Groose had untapped potential when he was trapped on that slab of floating land.

Groose didn’t really get his wings until he leapt after Link and crashed down in Faron Woods. First off, it was 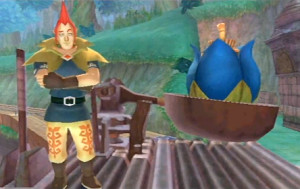 because of Link’s sailcloth that Groose didn’t die after his fall so once again Link is instrumental in freeing a character (gosh, he’s like a flight instructor). Anyway, after falling Groose is presented with this new and expansive world. No longer is he confined to the life of a Skyloft knight, no, he’s free to carve out his own destiny. Almost instantly we see this shift in him, he’s still cocky but he has let his guard down and opened himself up to new ideas and roles for himself. Without the restrictions and competition of living in Skyloft, Groose is able to rise to the occasion and actually aid Link against the Imprisoned by dipping into his inventive prowess to create the Groosenator.

I feel like I need to address Link’s being an important tool in most everyone’s eventual emancipation, though it’s an occurrence I hadn’t initially seen. My first thoughts were that it fit ironic flight in a sense, because though Link is able to bring freedom to so many people he is forever enchained by the prophesy and his role as the Hero of Hyrule. Well that about wraps things up for this installment, to recap Flight = Freedom (unless it’s ironic when it means the exact opposite). This lesson is really easy to apply because flying is generally associated with escape from entrapment; while it’s easier to discern in characters who physically have or are given wings, it’s my hope that you’ll identify any reference flying or falling as a “flight of fancy”.

Keep an eye out for freedom flights in other video games, books, movies, cartoons, and any other media platforms you indulge in! What did you think of this week’s lesson? Do you agree with the sentiments expressed? Disagree? Liberate your mind in the comments and feel free to provide examples of your own– there are plenty, just think Skyward Sword!