One Week Left To Download Four Swords For Free 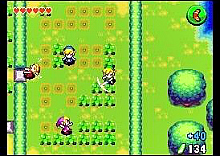 As part of the 25th Anniversary for The Legend of Zelda, Nintendo released Four Swords as a free download for anyone with a DSI or 3DS. The game received a partial makeover featuring a second quest which contains new levels that take inspiration from previous Zelda games. Nintendo gave us a very considerate amount of time to download the title, but sadly, the deadline is coming up very soon. February 20th will be the last day this title is available for free. If you have not already, make your way on over to the Nintendo E-shop and make the download. If you’re interested in what exactly makes this version different from the one you may already own, make the jump inside for more details on this incredible mulitplayer Zelda experience.

In celebration of the series’ 25th anniversary, The Legend of Zelda: Four Swords returns – with new additions!

When the evil Wind Mage Vaati escapes from confinement, Link™ must draw upon the power of the legendary Four Sword and save the kidnapped Princess Zelda™! But there’s a catch — whoever touches the sword will divide into multiples! Play in single player mode and control two heroes, or play via DS Wireless Play with up to four friends! Hurdle through challenges by using teamwork as you scramble to collect the most Rupees! The Great Fairies are always watching your efforts, and will reward your bravery based on how many Rupees you collect.

This edition includes — new stages and modes. Upon completing the main quest, relive memorable moments from the past with levels based on previous Zelda games in ‘The Realm of Memories.’ The bold and daring can test their adventuring skills in ‘The Hero’s Trial.

Four Swords Anniversary Edition is considered a free gift from Nintendo. A lot of fans missed out on their chance to play Four Swords to its fullest extent when it was first released. Even if you did have the game, chances are that your friends may have not. Now, for this limited time, the game is completely free for anyone to play. If you own a 3DS or DSI, you really have no reason to miss out.

Have you played Four Sword Anniversary Edition yet? What are your thoughts on the game? Does the newly added features and content really make the game better? Let us know your thoughts in the comments below.