It has long been rumored that two of Ocarina of Time‘s temples, the Forest and Water, were themed around wind and ice respectively. Did You Know Gaming sums up the argument for this perfectly with their photo on the subject. Jump in to see! 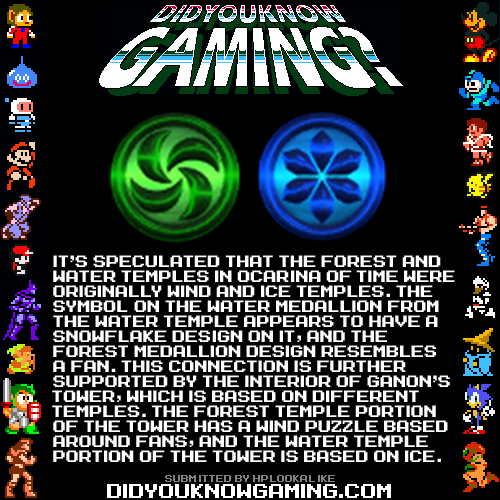 I completely agree with this speculation. I was a bit uneasy about it at first, thinking the forest medallion looks like blades of grass whirling around instead of a fan, but even that claim requires wind. You would think that a forest themed temple would have a tree on the medallion, right? Same for the Water Temple; you would expect a drop of water or a wave instead of an obvious snowflake.

Not to mention the Ganon’s Castle claims. Here is part of the Ocarina of Time Zelda Dungeon Walkthrough that goes through the forest, fire, and water rooms in Ganon’s Castle:

The forest section uses pretty much only fans, and the water section is a bit reminiscent of the Ice Cavern instead of the Water Temple. The Ice Cavern is a mini-temple in and of itself, so the developers might have wanted to feature it one more time? Maybe instead of the Water Temple originally being an “Ice” themed temple, the supposed “Ice Temple” was an entity of its own, but was not big enough to be a full-fledged temple. Thus, it was made into the Ice Cavern. There were definitely many original obstacles and puzzles to the Ice Cavern, so it makes sense that it might have been its own temple at one point (this is in direct contrast to the other mini-temple, the Bottom of the Well, which has many elements of the Shadow Temple, but lacks the Ice Cavern’s originality). Nevertheless, the snowflake on the water medallion is a bit out of place.

These theories have been around for a while: what do you think of all of this, Zelda Dungeoners? Were the Forest and Water Temples originally wind and ice? Comment and let us know!