1.1 Inside the Deku Tree

~ Getting the Dungeon Map ~

As soon as you enter take a look around the place. For being the ancient interior of the protector of your sacred forest, it is pretty roomy inside. In the center of the floor is a large spiderweb stretching over a hole in the ground. There is a golden torch, unlit, next to it. A ladder is directly off to your right, and a vine wall in front has a skullwalltula crawling on it. Collect any items from the Withered Deku Baba and regrowing grasses here if you need to.

Since you don’t have anything to take defeat the skullwalltula, climb up the ladder instead. Right now it’s easier to avoid the Keese, so keep running until you see a strange blob-like thing. As you approach you’ll see another unlit golden torch. Get closer and the egg will hatch into the enemy rarely seen in the original adventure, Deku Larva. Defeat the larva and open the treasure to claim the Dungeon Map. Be careful as another Larva will drop from above. Roll and break the crate right next to the chest to find your first Golden Skulltula.

Climb up the vines to reach the top of this room. Run all the way around until you find a Deku Baba waiting. Defeat it to claim your first Deku Nuts and gain access to a button switch. Step on it to light the golden torch nearby (as well as the rest of the torches in the room), burning up the spiderwebs and allowing you access to a new room. Go through the door to your first puzzle room.

Kill all the Larva and Deku Baba on the ground, then use the switch to raise the three platforms. Hop to the other side, defeating all the enemies, and then head back to the switch. Hit the button switch again and head to the side alcove. After defeating all of the enemies here, a chest will appear with the Fairy Slingshot. Now that you have your first ranged weapon, things should get much easier. Keese are easier to deal with, Skullwalltulas can be gotten rid of, and Gohma Eggs can be broken from a distance! Light the unlit torch in this room and get to the chest for a blue rupee. Bummer. There is nothing left to do in this room, so head back to the previous room.

Head back down to the second floor and light up a deku stick using the torch. Use this deku stick to burn down the spider web and head through the door. You’ll find a Big Deku Baba here, so be careful as it has long range and its attacks can be harmful. Use your slingshot to break the gohma larva eggs before they can hatch, then take aim and shoot the eye switch on the far wall to raise the spikes and open the door. In the next room, shoot the Skullwalltulas and Eggs before they even have a chance to become a threat. Look towards the ceiling in the center of the room and you’ll find a skulltula waiting to drop down, so get rid of him with the slingshot. Jump towards the treasure chest and open it to get the Compass!

A Golden Skulltula waits for you above but is hiding behind some boulders that you cannot yet move. You will need to get bombchus and return here at a later time to get this gold skulltula token. Turn around and shoot the ladder to leave this room and return to the main large room.

Jump down to the bottom floor and pull out a deku stick. Light up the deku stick using the torch and roll over the spiderweb to open up the hole. Jump down and fall into the water below. Climb up onto the floor to the right. Defeat the deuk Babas and step on the nearby switch. Now, jump/swim to the lower level, light the spiderwebs using lit deku sticks and hit this next switch. Go back to the level with the first switch to get the chest for… 5 rupees!? Again!? Yay…. Shoot the switch above the door on the level with the second switch, and head through the door.

Once again, this one locks behind you. A Mad Scrub ambushes you here, but you can simply use your shield and slingshot to defeat it from a distance. Also shoot the larva eggs that can be found in this room. After defeating everything (including an egg on the ceiling) the door you originally came through opens, but not the new one…. Go back to the previous room, light a deku stick, and quickly carry it through the door (don’t worry, the enemies in this room are still gone), and light the two torches near the new door to unlock it.

There is a chest right next to the door in this new room and it contains a Recovery Heart for your troubles. Take out your slingshot and take care of the larva egg on the ceiling, then head over to the blue switch. Hit the switch and quickly light a deku stick. Jump onto the moving platform, go under the spikes, and light the unlit torch on the other side. It make take a few tries, and there is a Withered Deku Baba on the other side if you need additional sticks. There is another treasure chest in this room, but we cannot get it until we return to this room at a later visit to the Deku Tree. Climb the block and head towards the next room.

In the next room, take out all the keese and larva eggs with your slingshot. Don’t move towards the center of the room, as all of the larva eggs will drop and hatch into gohma larva. Once all the enemies are defeated, continue on to the next room.

This new room looks like it is one elaborate graveyard. Take out the keese perched atop the torches and then check out this room. There area few Deku Babas, a withered Deku Baba, and a blue switch surrounded by torches. There is also a Golden Skulltula on the ceiling, but you can’t get to it yet as you will need the Song of Time and the Boomerang. The room to the northeast has a Big Deku Baba protecting another Golden Skulltula, but you can’t reach this one yet either, so we’ll come back to that later when we have the boomerang. Light the spiderweb to the west, and then crawl through the tunnel to get back to the first room of the basement.

There is another spiderweb on the ground covering a hole. If you look left, you’ll find a Deku Business Scrub selling a Deku Shield for 50 rupees, so you can purchase one here if yours burnt earlier in the dungeon. Defeat all the enemies on this side of the room and head to the block and push it into the water below. Light a deku stick at the lowest level and carry it all the way up to burn the spider web. Fall down the hole to get to the bottom floor of the dungeon.

You will be ambushed by three Deku Scrubs in this room and you have to defeat them in a certain order. After a little trial and error, defeat them in the order of left, right, and then center and the last one will ask “How did you know our secret?! How irritating!” He tells you the only way to defeat the boss is to attack while she’s stunned, then runs away, leaving you a nice recovery heart for your troubles, and unlocks the door. Enter to be locked in with the dungeon boss, Queen Gohma! 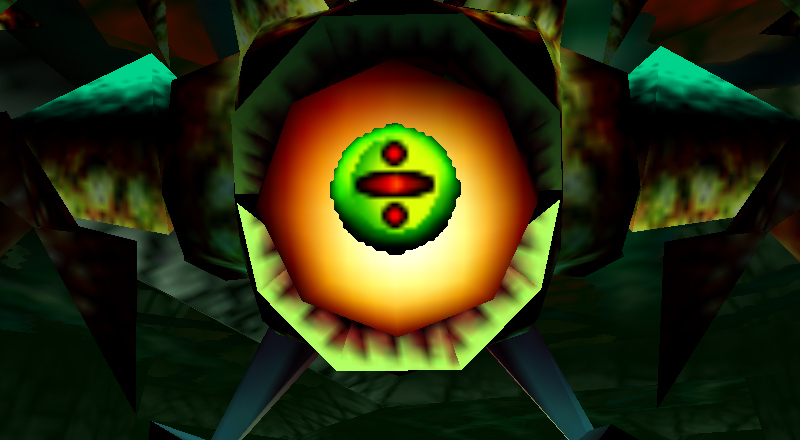 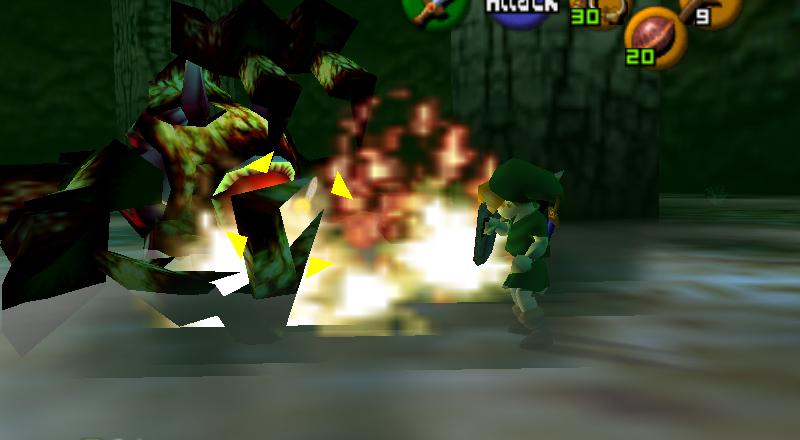 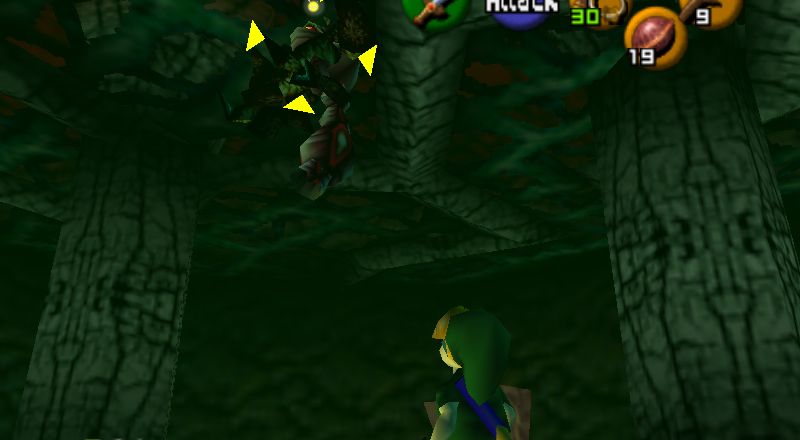 At the start of the battle, use either C-up or your Slingshot to look up at the queen on the ceiling, which will begin the battle. Although she looks pretty intimidating, she’s a piece of cake.

Her main attack is to wobble towards you and then try to basically fall on top of you, which can be easily defended against using your shield or simply moving out of the way. Her other form of offense is to climb onto the ceiling and make three eggs, which will fall to the ground and hatch to become Gohma Larva after a short bit. 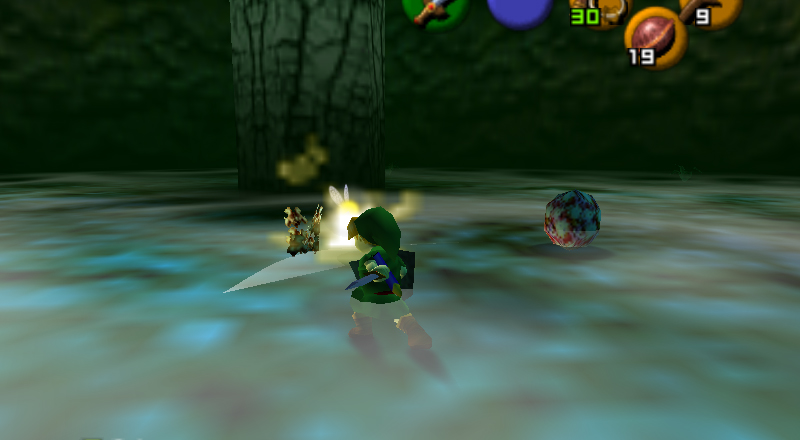 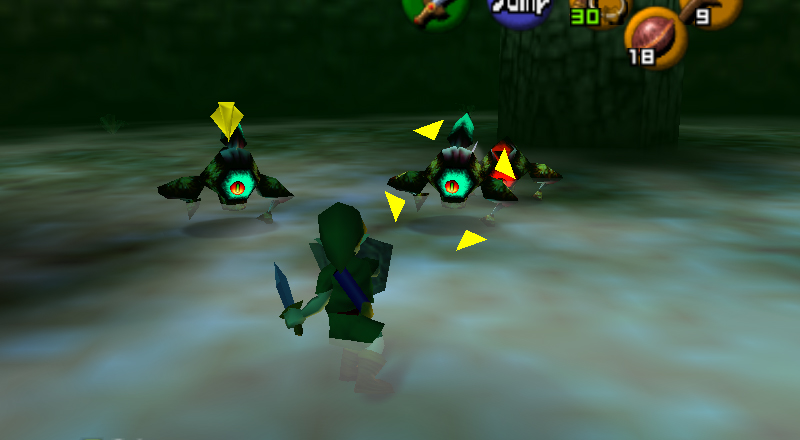 The Larva are easily defeated with two sword swipes or a Jump Attack, but they can be killed quickly by simply slashing each egg before they hatch. 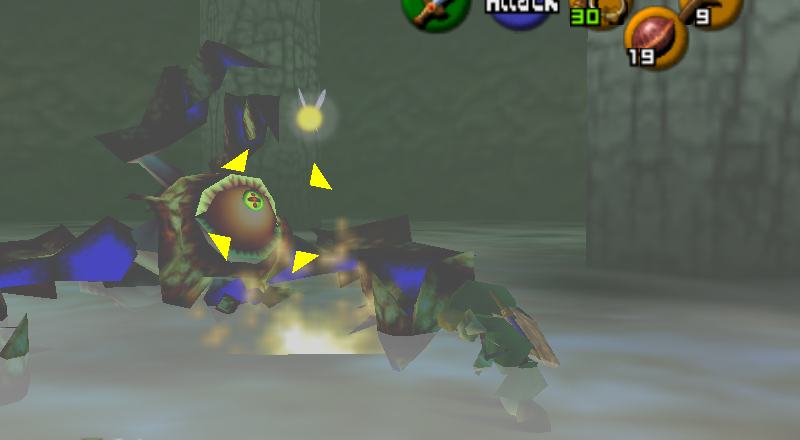 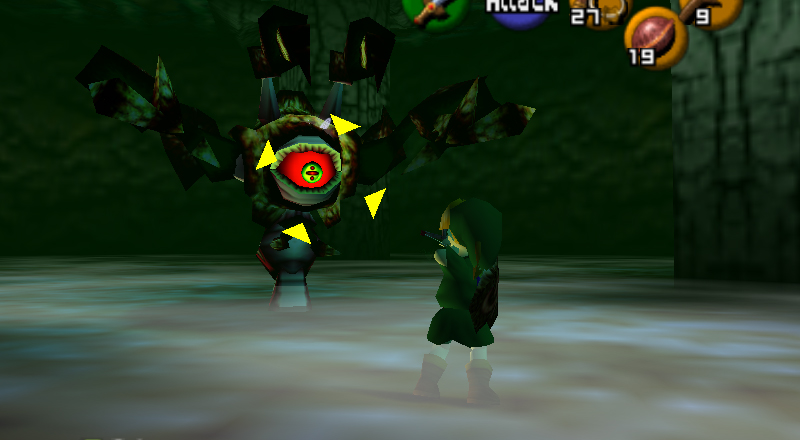 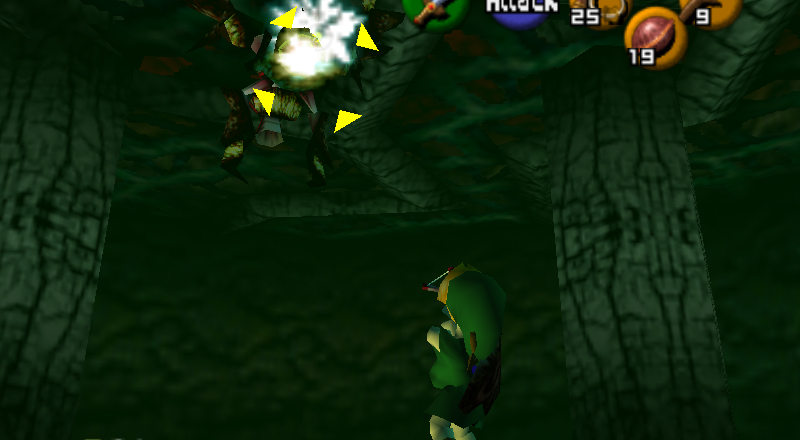 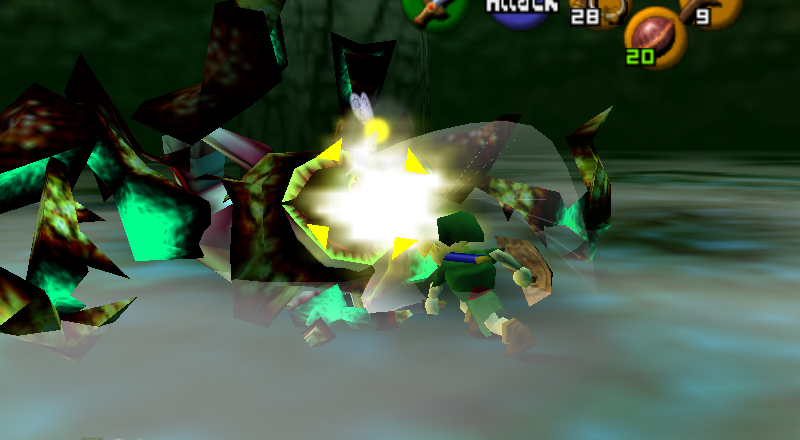 To harm Gohma, you have to use either Deku Nuts or your Slingshot when her eye is red (right before or after either of her “attacks”). This will cause her to fall down and be vulnerable to your sword. The Slingshot is by far the most effective. Regardless which way you do it, once she’s stunned, smack the heck out of her for as long as you can.

The easiest way to defeat her is to simply wait for her to climb on the ceiling and stun her then (this stun is far longer). If you do it right, you can finish this boss off in less than a minute.

After the cool scene of her disintegrating, snag the Heart Container left in her remains, then step into the shiny light to teleport out of the dungeon.