Ocarina of Time is Considered Realistic? 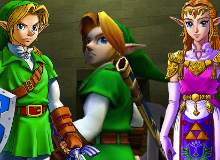 I might be a little late to the party making this argument (although I’ve talked about it in the past), but I thought it was worth addressing because I still see this discussion sometimes. When Twilight Princess came out, some people — myself included — did not like its artstyle. A major criticism it receives is that it’s too realistic. I myself don’t agree with that… certainly the developers were trying for a realistic western fantasy artstyle, but I think they failed in a way, and it’s still fairly stylized; I don’t like the artstyle because it’s too gritty, boring, and graaaayyyyy… but I digress, and this is not an editorial meant to bash Twilight Princess.

No, Twilight Princess isn’t exactly realistic, but it is clear that Nintendo was going for the look to a greater or lesser degree, so the basis of the argument I hear still has merit. As for the argument itself: People defend Twilight Princess’ realism by saying that Ocarina of Time was realistic too. And that’s simply not the case.

In some ways it was a reasonable assumption to make, given that Ocarina of Time was the first 3D Zelda game and its polygonal look can be hard to decipher; it’s easy to assume that, had they been able to do more advanced graphics, they would have made it look as realistic as possible. But I really don’t think that’s the case. Ocarina of Time 3D is ultimate proof of that, in my eyes, because it’s a visual recreation of what Ocarina of Time could have looked like on better hardware, and it’s not realistic. To the contrary, it closely mimics the artstyle of Ocarina of Time’s official artwork, which always had a stylized anime-esque look, like Ocarina of Time 3D did. And, if you look for it, you can clearly see that this style is also present in the original Ocarina of Time’s graphics, with the eyes and mannerisms clearly mimicking the official artwork as much as possible. Not to mention the characters with ridiculous, unrealistic proportions.

Again, I don’t blame people for making the assumption… especially after the drama that unfolded with the Ocarina of Time-like Spaceworld demo (you can even see someone implying it was realistic in the top comment!) that was followed up with… The Wind Waker. It’s easy to look at the contrast between Ocarina of Time’s style and The Wind Waker’s and think “Realism!”, though it’s still not true (and Ocarina of Time 3D is final proof of that). And also again, I do not think Twilight Princess was overly realistic, and certainly not bad for its attempt at realism. It was notably close to Ocarina of Time’s style in that area — which is ironic for me to say, since I originally got annoyed at people saying Ocarina of Time was realistic because they were defending Twilight Princess — and if I ever make a Zelda game or, more likely, a Zelda-like adventure game, I would probably do something pretty close to its balance of realism and style.

Anyway, I do not intend to this post to bash any particular artstyle or anyone’s opinions or assumptions. I simply want to put out this argument (which I believe to be irrefutable, if I’m being honest), and emphasize these aspects which I think easily indicate the true intentions of Ocarina of Time’s artstyle. Ocarina of Time did the same thing that Twilight Princess, Skyward Sword, and indeed every previous Zelda game did: Take a certain degree of realism and detail, and inject stylization and imagination into it. An anime style. Obviously they all did it in different ways (which one did it the best being, of course, a matter of opinion), but they still have the same underlying principle. The Wind Waker’s style, carried through Four Swords, The Minish Cap, and the DS titles, was the only serious deviation, though that doesn’t make it bad.

So what are your thoughts? Did you ever consider Ocarina of Time realistic? Do you agree with my argument? How do you feel about the relationship between different Zelda games — especially lately — as far as artstyle is concerned? I might think my argument is solid, but that doesn’t mean I’m not interested in your opinion! Tell me in the comments, especially if you think I’m wrong!