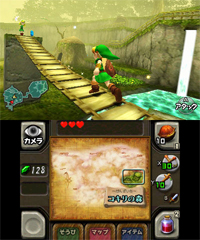 After yesterdays press events in Europe and in New York, 100’s of people got their hands on Ocarina of Time 3DS and there are now quite a diverse amount of hands on impressions of the game. Shown below are a series of impressions from various websites.

The 3-D effects look smooth and clear, with hardly any ghosting, and all of the character models have been boosted to look sharp and clean. Some cute extras, like being able to aim the slingshot with the 3DS gyroscope add some novelty to the mix, but overall it appears to be a very capable port.

The 3DS update features graphic rendering that wouldn’t look out of place on a Wii. Ocarina of Time is a bit over 12 years old and at times shows its age — for example, you’ll have to get used to the lack of robust camera controls — but this seems to be a satisfactory 3-D remake that will give us all a good excuse to replay a masterpiece.

The most obvious addition is that of autostereoscopic 3D visuals. It’s particularly interesting in the case of Zelda, as these effects have been retroactively added to a game now approaching its 13th birthday. Unsurprisingly, this means it’s a mixed bag on the 3D front. Our hero Link seems glued to the foreground throughout, with the ensuing action intermittently jumping forward to greet him. Also ghosting, particularly when entering the first-person aiming mode to shoot Link’s slingshot, was too prevalent for us to fully enjoy the added depth. Perhaps extended play time will help us grow accustomed to Zelda’s newly-found extra dimension, but so far it doesn’t really add much to the gameplay.

Yes, it’s in 3D, and it looks pretty great, as good as any other 3DS game I’ve played. Another 3DS enhancement taps into the system’s built-in accelerometer. When Link equips the slingshot you can aim the traditional way, moving about the Circle Pad, but you can also move the entire 3DS around to “aim” the slingshot. You could, of course, just lock on with L-targeting, if that’s your playing style. Otherwise, it’s the same Ocarina you played all those years ago, and that’s very much a good thing.

There are dozens of other websites online that have posted their impressions but the above sources seem like a great sample. Overall, it seems unanimous that the upgraded graphics look pretty faboost. However, there seems to be a mixed opinion towards the 3d effect. I’m personally thinking that for a game like Ocarina of Time, it’s perfect that the 3ds can adjust how strong the 3d effect is and even give the gamer the option to disable it. Many gamers will fall in love with the new 3d material, while others will stick with 2d and just bathe in the nostalgic glory that is Ocarina of Time. Either way, it’s looking likely that we won’t be able to get our hands on Ocarina of Time 3ds until at least the summer. Be sure to stay locked in here at Zelda Dungeon for all the latest news related to Ocarina of Time 3ds.