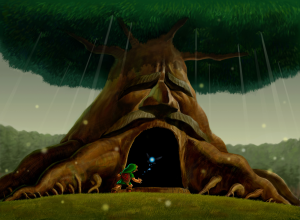 Glitch finders GnS and Skater recently found a new glitch in Ocarina of Time which, if utilized by speed runners, could potentially further lower the already spectacular 18:07 OoT Any% world record by Jodenstone. Take the jump to see what this glitch is all about!

The video below by YouTuber SnipinG1337 shows the new glitch, where through a few tricks involving taking damage, picking up a deku nut, and falling into water, players can obtain a bottle inside the Great Deku Tree.

The bottle is widely agreed to be the most broken item in Ocarina of Time, and has long been a necessary item for wrong warping in world record Ocarina of Time Any% runs. Before, runners had to leave the Kokiri Forest early and head to Kakariko Village in order to get the fastest bottle they could from the Cucoo farmer. Obtaining a bottle inside the Great Deku Tree opens up the possibility of never having to detour to Kakariko Village at all, potentially saving runners a good chunk of time. Previous world record holder CosmoWright and current world record holder Jodenstone, among many other Ocarina of Time speed runners, are streaming on twitch.tv periodically, practicing the new glitch, trying new routes to beat the game even quicker than before.

There is also, through this same method, a way to get Light Arrows inside the Deku Tree, but they do not seem to be as useful as the bottle is to speed runners.

Check out the many Ocarina of Time streams on twitch and watch as this new glitch further breaks the game!