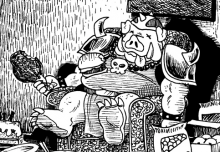 Not only that, but brentalfloss, being the music oriented artist that he is, sung the entire thing in a comical fashion! The song gives a hilarious tone to an otherwise morbid collection of stories. Hit the jump to read and listen!

As you can tell, the Game Over Tinies comic is a collection of the stories of character deaths, A to Z style. Here are all the panels in order.

If that wasn’t an adventure enough, now listen to the song!

Edward Gorey would be proud. I’m sure if Gorey saw his own disturbing alphabet comic in brentalfloss’ video game adaptation he would approve. And after listening to the song, I can’t read The Gashlycrumb Tinies without singing the tune in my head.

I do think the voices brentalfloss uses in the video very well contrast the macabre illustrations from the comics. It follows the true spirit of Gorey’s intention of poking fun at the idyllic character of children’s books in a sarcastic but still in a ghoulish fashion. Similarly to how Edward Gorey prodded at the fears and paranoias of being a parent, brentalfloss and his comic ridicules just a few of the many game deaths we’ve all experienced.

If you enjoyed this, brentalfloss is selling a poster of all the panels from the Game Over Tinies. It would look nice hanging next to a copy of The Gashlycrumb Tinies.