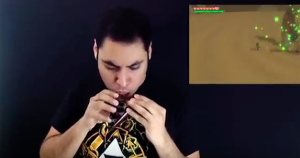 In honor of Zelda Month we have a pretty spectacular cover of Molgera’s Battle theme on Ocarina to share with you. David Eric Ramos was introduced to the Ocarina in the same way that many of us Zelda fans were, with Ocarina of Time. Ever since he has been hooked, and since 2000 after receiving his first Ocarina he has been traveling the world ,sharing his love for music and this very unique instrument with fans. This particular cover has been 2 years in the making and also features David playing the Djembe drum. Jump on in past the break and check it out for yourself!

This isn’t the only amazing cover of Zelda tunes that David has done, check out his YouTube channel to have a listen! I really enjoyed this cover and feel that the Djembe drum was the finishing touch that really completes the song. What are your thoughts? Which Zelda song would you like David to cover next?